What You Need To Know About Facebook Mobile Ads

By Amy Porterfield
January 23, 2013
Opinions expressed by Entrepreneur contributors are their own.

Not only did Facebook hit the one billion active user mark last year, but the number of people accessing the social site primarily over mobile devices also skyrocketed, to about 60 percent of total users. And co-founder Mark Zuckerberg has said that mobile users are 20 percent more likely than desktop users to go on Facebook on a given day.

What business owners should take note of: Mobile advertising on Facebook is said to be producing better results than ads that appear in the right-hand column or in the news feeds for desktop-only users. And click-through rates on Sponsored Stories have been, on average, 12 times higher on mobile devices than on desktops, according to Marc Grabowski, COO of Nanigans, a firm that buys Facebook ads for its clients. If there was ever a time to start testing mobile ads, that time is now.

But setting up mobile-only ads isn't as straightforward as using Facebook's self-serve ad manager. You can't just click a button to make your ads accessible on mobile devices. Instead, you need to reach mobile users through their news feeds because they cannot see the ads that appear in the right-hand column on Facebook.

Getting to know the Facebook 'Power Editor': Unless you're using the Facebook API for ad management, the only way most business owners will be able to set up mobile-only ads is through Facebook's free Power Editor, a Chrome-only plugin. To get going, open Chrome, install the Power Editor, and access it here. Select "all" accounts when prompted so you can get your past ads -- these can come in handy when creating new ads and tracking results.

For newbies, the Power Editor can feel more difficult to navigate than Facebook's self-serve ad manager. So, Facebook has created a guide to using it. It's worth getting to know well enough to leverage its more advanced tools, including the "placements" feature that enables you to create ads that go to the news feed on desktop, news feed on mobile only, or both, or right-column only ads.

1. Page post ads, when set up with Power Editor, appear directly in the news feed and, as a bonus, can be targeted beyond fans and friends of fans. They can include photos, offers and more, just like a normal page post ad, and usually show up with a "sponsored" or "suggested post" label. Here's an example from Country Outfitter, an image captured on my mobile phone: 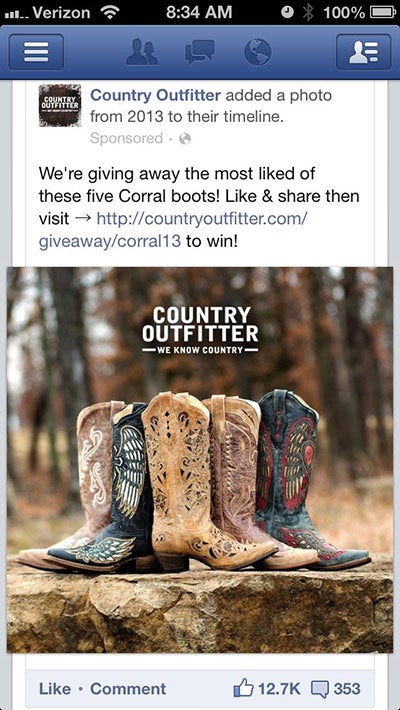 With page post ads, you can reach users via mobile, desktop or both. (But note that the new Facebook ad guidelines state that text in any news feed ad is limited to 20 percent of the total ad image area.)

Related: New Facebook Rules Limit Use of Text on Images

3. Sponsored Stories show in the news feed under the heading "Pages You May Like," and are used to promote activity to your fans' friends, with the intention of attracting like-minded people. These ads promote activity such as a fan liking your page, claiming an offer you created or commenting on one of your posts. As always, take care with how you target these to get the most engagement and likes. These can also be targeted to mobile-only, desktop or both, with the Power Editor.

4. Mobile app install ads can be a fun way for companies with registered apps to prompt users to go to their app download page. You can even choose what kind of operating systems and mobile devices your targeted audience has, which is useful if you have, say, an iPhone-only app.

For small-business owners new to mobile ads, it's best to test a few different news feed ads and target them carefully. Don't abandon desktop-only ad strategies that are working. Instead, find a way to integrate mobile into your overall strategy so you can compare results, test, track -- and test again.