Yelp: We Won't Stand for Businesses That Pay for Fake Reviews

By Jason Fell
August 13, 2013
Opinions expressed by Entrepreneur contributors are their own.

Can you really trust the reviews on popular user-review site Yelp?

Chances are you've checked Yelp for a recommendation on a great local restaurant, shoe store, dog-grooming service, or -- you name it. Chances are that you've also come across a review on a business's Yelp page that has made you raise an eyebrow. Was that review a fake? Did someone pay to have it written?

As a business owner with a page on Yelp, this is and has been cause for concern. You have to be on Yelp because so many people use it. But if consumers can't trust the content they find there, then what's the point? Yelp is taking the problem seriously. Today, the site has released a new set of consumer alerts that it will display on business pages that Yelp suspects are paying or incentivizing people to write fake reviews.

Indeed, Stamford, Conn.-based research firm Gartner predicts that by 2014 as much as 15 percent of reviews on social-media sites could be paid-for fakes.

"We've seen some pretty extreme chicanery in connection with these businesses, including people buying fake reviews, offering rewards or discounts for reviews, or having a large number of reviews submitted from the same Internet Protocol (IP) address (a clue that someone may be trying to artificially inflate their rating)," Yelp wrote on its blog. 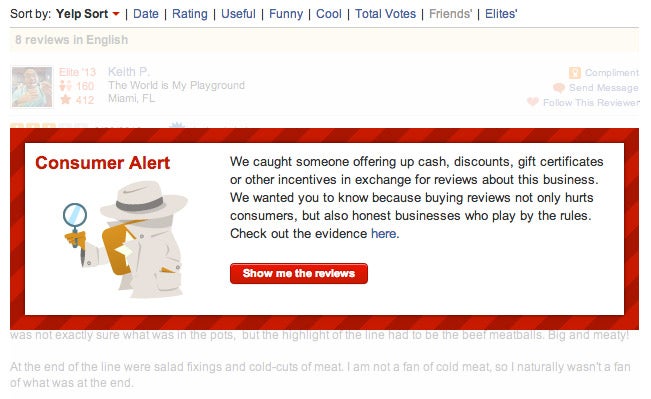 Yelp will display the new consumer alert messages on suspect business pages for up to 90 days with a link to the "evidence" that something phony has been going on. A Yelp spokesperson tells us business owners shouldn't worry about getting this disclaimer slapped onto their page if they haven't done anything wrong.

"We aren't posting these alerts indiscriminately -- we only post them after a thorough analysis and we are confident that these alerts are accurate," the spokesperson said.

Yelp has added this new disclaimer to eight business pages so far and has issued similar warnings about more than 150 pages since the Consumer Alerts program launched last fall, the spokesperson said.

Citing Google Analytics information, Yelp estimates that it averaged 108 million unique visitors per month last quarter. It did not, however, disclose how many businesses on the site it currently suspects of gaming its review system.

"We've gone to extensive measures to make sure that the consumers who come to Yelp can trust those reviews to reflect the real life experience they will have with that business," Yelp said.