Entrepreneur's Best of the Best list celebrates the franchises that ranked at the top of their industry categories in the Franchise 500. Some are fast-climbing newcomers, while others are older brands that have risen steadily up the ranks.

Related: 172 New Franchise Companies Hoping to be the Next Big Thing

In this slideshow, learn more about nine companies that are new to this year's list and how they made their way to the top in the increasingly competitive world of franchising. 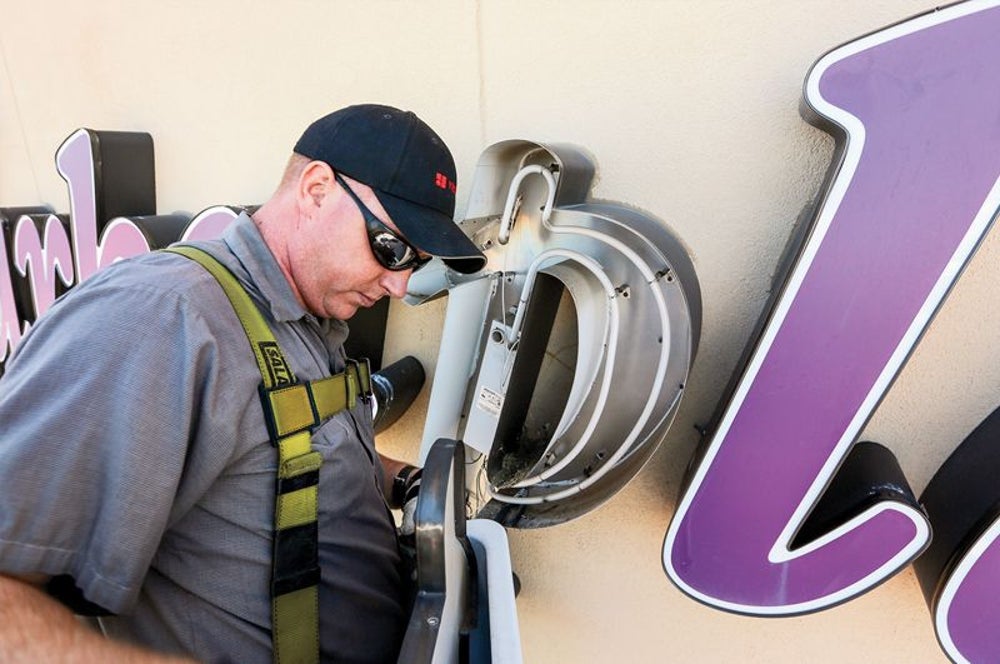 Image credit: Yesco
Clocking in at 100 on our Franchise 500 ranking, Yesco is one of the oldest companies here, world-renowned for its sign and lighting designs and installations. Never heard of Yesco? You’ve almost certainly seen its work—for instance, the “Welcome to Fabulous Las Vegas” sign (at the bottom of which you can actually spot its logo). Despite Yesco’s long history, franchising didn’t begin until 2011, with franchisees acting as the company’s service-and-maintenance arm. Franchisees find new business by having “patrollers” drive around at night taking pictures of signs and lighting in need of service. Each lead is geocoded into a mobile app. Then Yesco’s proprietary software alerts a salesperson and allows them to contact the potential customer and schedule a technician. 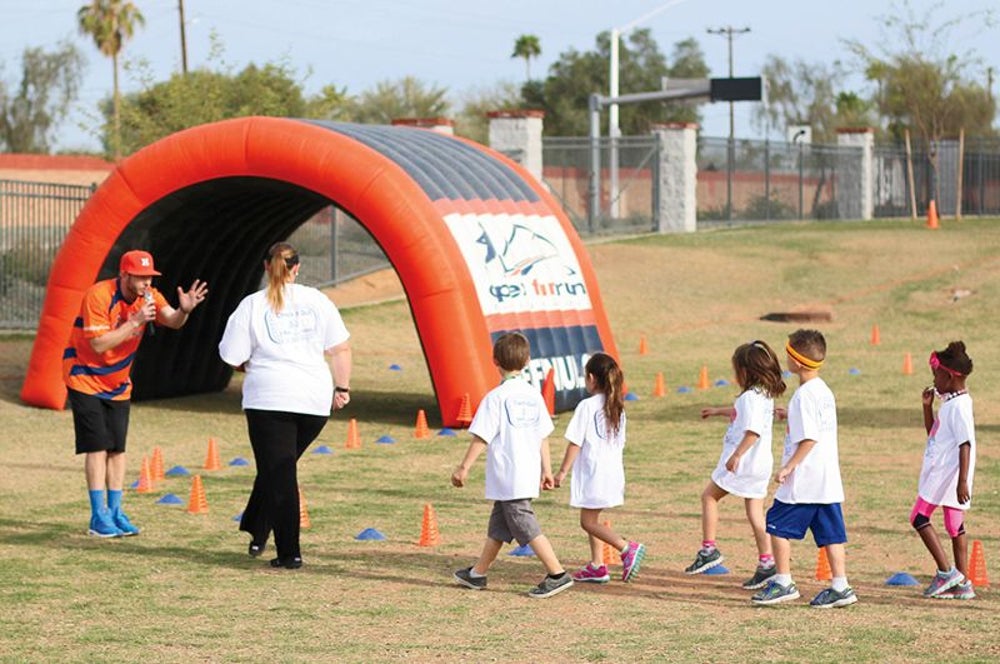 Image credit: Joanie Simon/Apex Fun Run
Instead of asking students to hawk chocolates or gift wrap to raise money for their schools, Apex Fun Run seeks to make a bigger impact by combining fund-raising with lessons in leadership and fitness. Donations are solicited online and through social media, so kids can focus on running around the track instead of running around the neighborhood with a pledge form. At the end of the fund-raising drive, each student participates in a race and earns money and prizes based on the per-lap pledges they received. After just five years of franchising, the program has served one million children nationwide and raised more than $25 million for their schools. 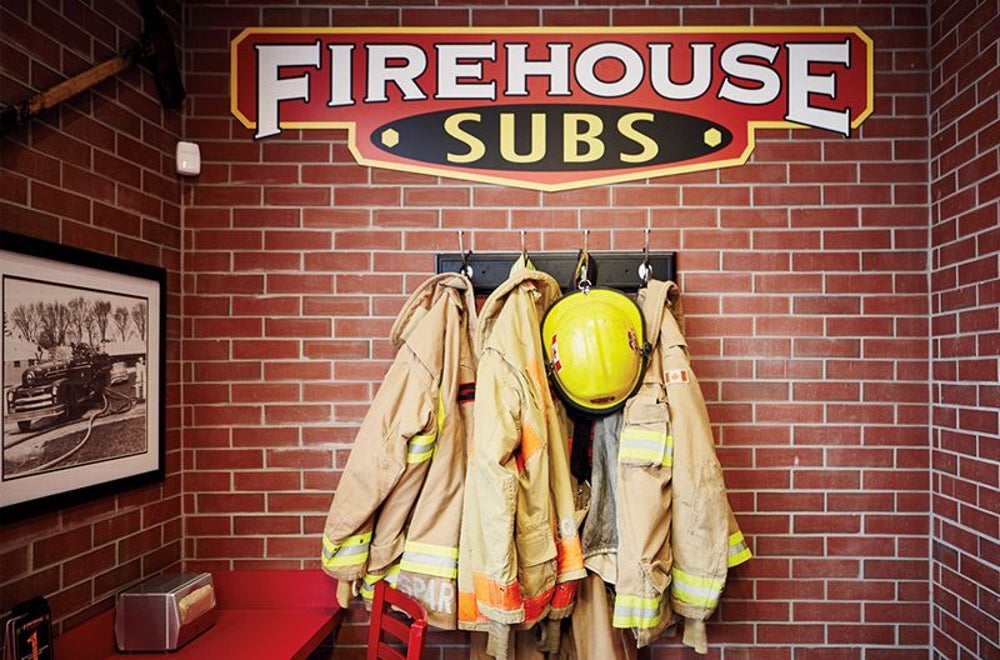 Image credit: Firehouse Subs
Before founding Firehouse Subs, brothers Chris and Robin Sorenson tried their hand at Christmas tree sales, video production services, lawn care, and housepainting. They finally found success with two key ingredients: subs that are steamed instead of toasted or (shudder) microwaved, and restaurants themed in honor of their family’s 200 years of firefighting history. In addition to firefighting equipment and photos, each store features a hand-painted mural depicting the history of its local fire department. Today there are more than 1,000 Firehouse Subs locations, and the company has donated more than $13 million to first responders and public safety entities. Not bad for a business started by a couple of guys who couldn’t sell even one Christmas tree. 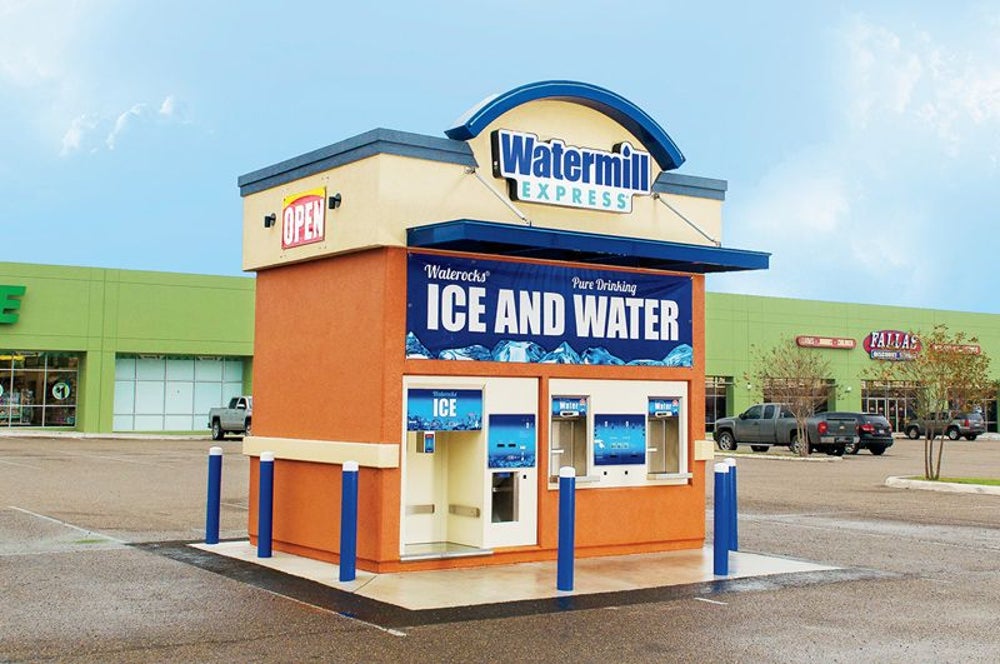 Image credit: Watermill Express
Don and Lani Dolifka created an automated, small-scale water-purification system in their garage after learning that the drinking water where they lived had been declared unsafe for pregnant women and babies. Thirty-three years later, customers can fill reusable containers at more than 1,300 Watermill Express locations around the country. But the company is committed to making sure clean water is available around the world as well. Through its One Gallon Here = One Gallon There initiative, it donated more than 100 million gallons to the developing world through World Vision in 2016. And it spearheaded Clean Water Here, a social media campaign to raise awareness on UN World Water Day. 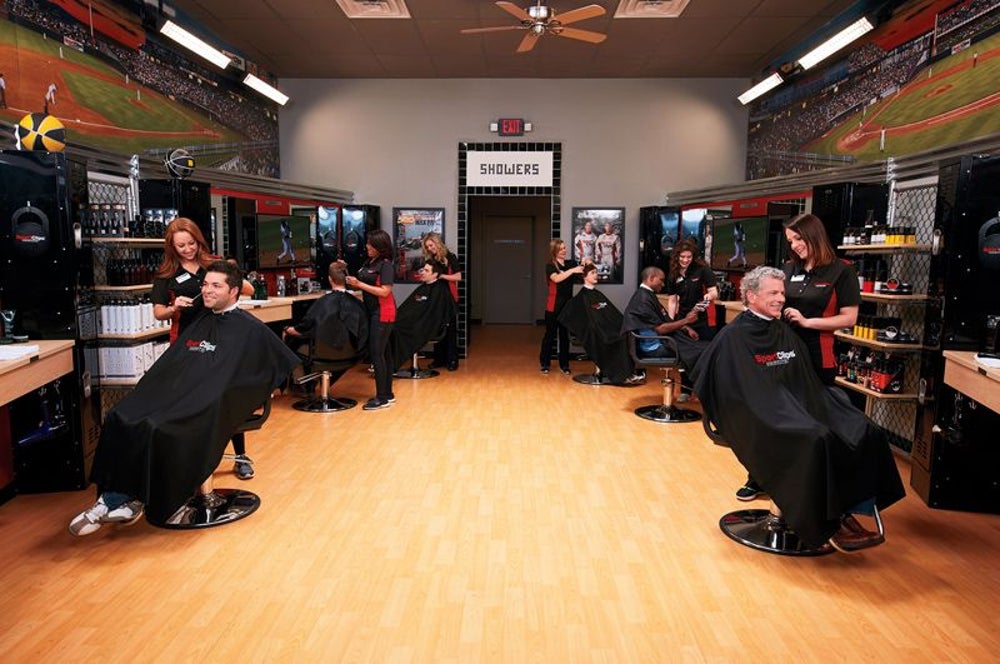 Image credit: Sport Clips
Sport Clips founder and CEO Gordon Logan was just named the International Franchise Association’s Entrepreneur of the Year. Logan has been involved in franchising since 1978, when he became a franchisee of another salon brand, which eventually went bankrupt. In his acceptance speech, he said, “I had seen the results of a poorly structured franchise system and the adverse effects it had on my fellow franchisees when we didn’t have the support of the franchisor. When we developed Sport Clips, I was committed to building a system that put profitability of our franchisees first.” The result is a franchise with a continuity rate of more than 99 percent, and the only haircare concept with locations in all 50 states. 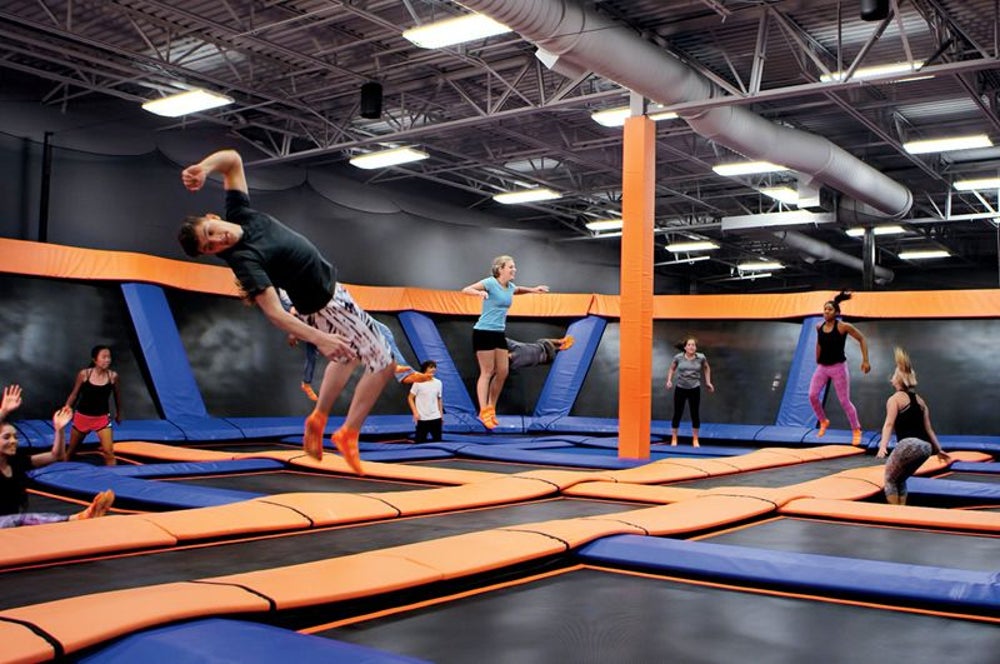 Image credit: Sky Zone Indoor Trampoline Park
The folks at Sky Zone may have pioneered the booming indoor-trampoline-park concept and grown to more than 150 locations, but they’re not content to rest on their laurels. In fact, their strategy has evolved from targeting families to focusing on the thrill-seeking Generation Z. To that end, CEO Jeff Platt has put together an innovations team to brainstorm new attractions and activities. Already implemented are Ninja Warrior courses, glow-in-the-dark jump nights, bouldering walls, and laser tag. In the works: an obstacle-course Nerf battle dubbed SkyWars. 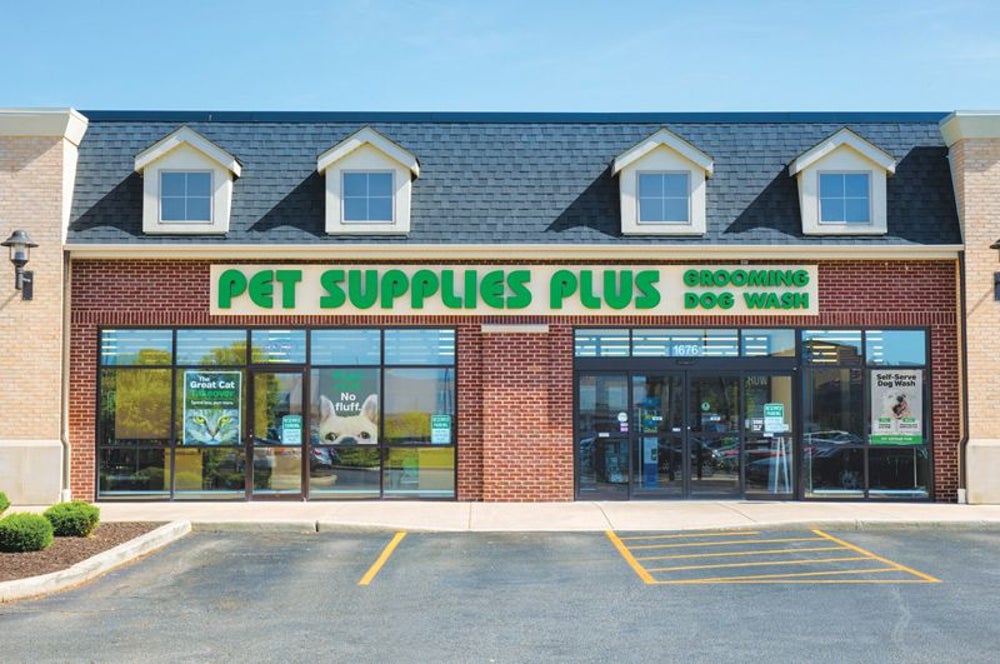 Image credit: Young & Laramore
With the introduction last year of a new slogan, “Minus the hassle,” Pet Supplies Plus has positioned itself as an easier, more personal alternative to the big-box pet stores. The “friendly neighborhood pet store” feel is aided by a small footprint; wide aisles to accommodate animals; employees who carry any product of more than 25 pounds for you; a price-match guarantee; and welcome boards customized with local pet-centric information. And though the stores may be smaller than the competition’s, they carry more than 40 natural dog food brands, including the company’s own, Redford Naturals. 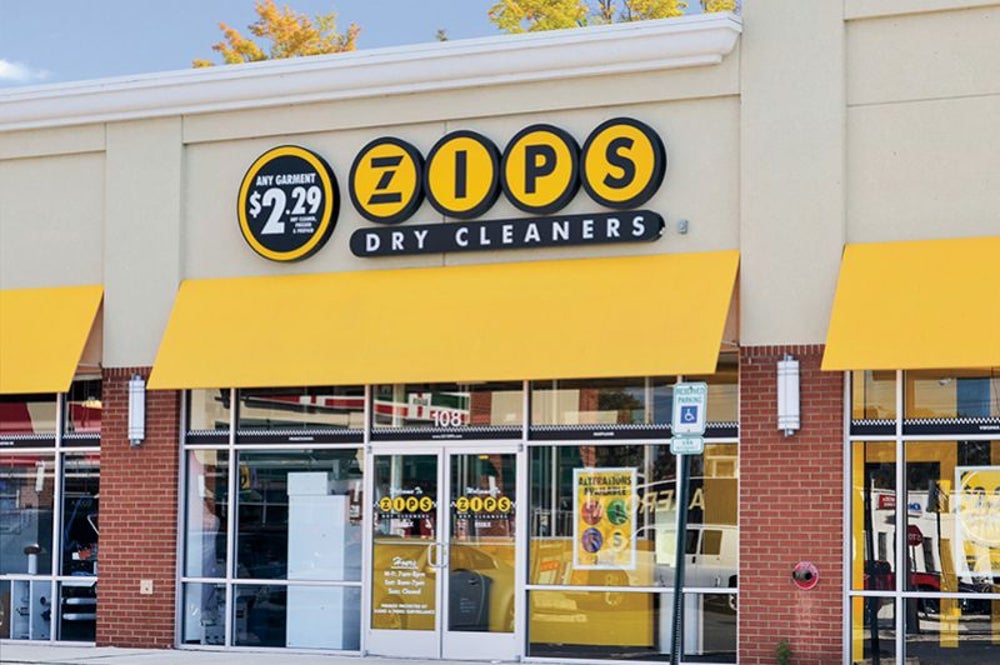 Image credit: Kate Ann Morriss/Zips Dry Cleaners
Zips franchises charge just $2.29 to dry-clean any garment. That alone is enough to make them stand out—and they know it. The company even has a savings calculator on its site so you can compare it to your current cleaner. But Zips also differentiates itself through eco-friendly practices—such as recycling hangers, using biodegradable plastic bags, and cutting down on waste and water usage—as well as community involvement. Zips locations donate thousands of unclaimed garments to charitable organizations annually, and collect and clean donated coats to give to those in need each winter. 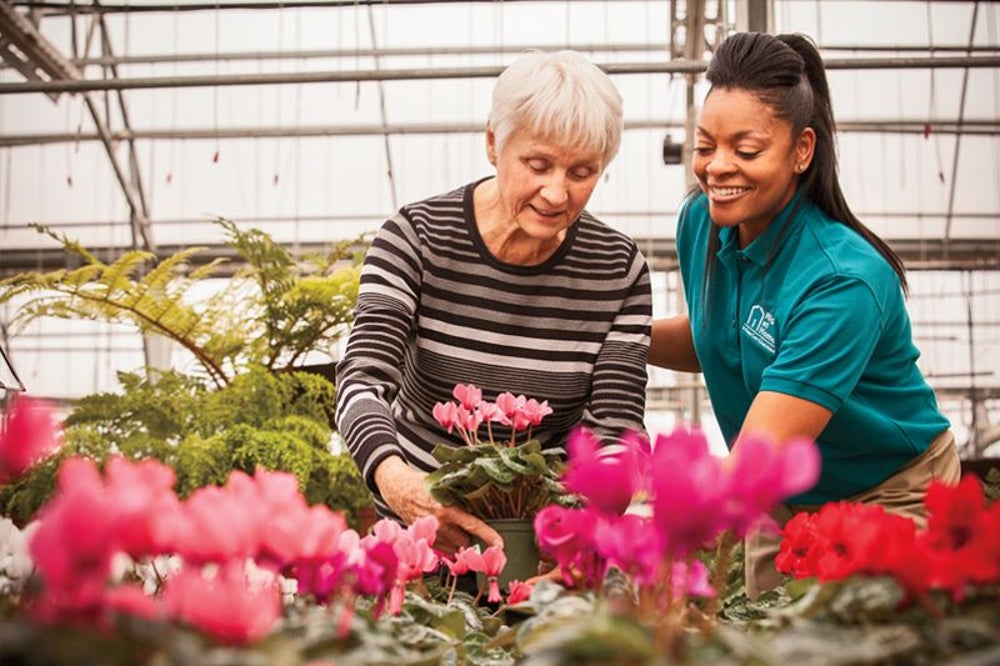 Image credit: Larry Larson/Right at Home
Before founding Right at Home in 1995, hospital administrator Allen Hager talked to dozens of families to understand their needs, even going so far as to become a certified nursing assistant to learn what’s involved in a high level of care. Today the company places just as much importance on meeting the needs of its growing network of franchisees. It recently hired a team of web associates to handle every franchisee’s website development, SEO, and social media. It also facilitates a peer performance group for franchisees to encourage collaboration and accountability.
More from Entrepreneur