By Gwen Moran
July 30, 2012
Opinions expressed by Entrepreneur contributors are their own. 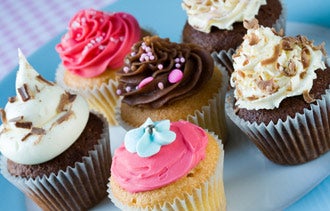 Tiffany Kurtz's Flirty Cupcakes van is a common sight in Chicago neighborhoods. More than 24,000 people follow the company on Facebook to keep track of where she'll be peddling her sweet treats on any given day.

About a year after her blue van hit the streets in 2010, she began looking for a stationary home and her own kitchen. "The financials made sense" for finding permanent space, but that proved to be more difficult than expected, she says. "[We'd believe] a space was perfect, but then it would be too much money or have hidden issues."

So, Kurtz enlisted the help of Moss, a local architecture and interior design firm co-founded by Matt Nardella and his wife, Laura Cripe. Her location wish list was relatively simple: She didn't want to be near too many other bakeries and needed an area with good pedestrian traffic. Still, it took a long search to uncover even a handful of spaces that fit the bill.

After five months, a "cheap walk-up fast-food place" turned up that didn't exactly project the hip vibe the confectioner wanted. But it was in a busy neighborhood within walking distance of the University of Illinois at Chicago, and most important, the rent was affordable. Kurtz snapped it up. She declines to disclose the rent, but one listing put it at $3,500 a month.

Kurtz's experience in redesigning the unappealing space provides some useful lessons to other businesses planning a retailing makeover:

Know what you can -- and cannot -- speed up. In addition to the five months it took to find a location, finalizing the design and obtaining permits ate up another two months. Then, construction took nearly three more months. Kurtz had thought that hiring a professional to handle city permits—her least favorite part of the process -- would move things along faster. But the professional didn't make the process any faster or less painful, she says, because she was still subject to the demands and timelines of the city. In hindsight, however, she says she would have worked with her designer to create a reasonable schedule and held weekly meetings to ensure that deadlines were being met.

Build your brand into your space. When she began planning the renovation, Kurtz knew she wanted Flirty Cupcakes Dessert Garage to reflect the established brand image, using the van's signature pink and brown colors and embodying the fun, retro feel of her mobile cupcake operation. Yet, she also wanted the space to be more than a storefront version of the van. Her vision was to design an inviting bakery that wasn't too pristine and was hip enough to attract the nearby college crowd. The garage concept and the space's industrial features helped create that milieu.

Look for hidden benefits. The first problem to overcome was the shop's dark atmosphere. "It wasn't inviting," Nardella says. "I wouldn't want to go past the front counter because it was such a dark hole beyond it."

But before he devoted too much of the $40,000 renovation budget to lighting, Nardella wanted to inspect some external features of the building that didn't align with the interior. He suspected some windows had been covered over through years of remodeling. Indeed, when he peeled away building materials, he uncovered large windows, including one with stained glass behind the cash register. Suddenly, light flooded in, reducing the cost of new interior lighting. In addition to those windows, rich-looking brick and steel columns and beams were hiding behind sheetrock and other materials, providing an industrial feel.

Work with the space -- not against it. Throughout the renovation process, Nardella says, he felt it was important that the shop reflect its history while still projecting the Flirty brand image. While the exposed brick wall is dramatic, other walls soften the look, painted pale pink with chocolate brown accent stripes to reflect Flirty's colors. Nardella also reconfigured the existing counter area by cutting back some unnecessary walls that had been built around it, giving the Dessert Garage a more open feel while still allowing him to add a display case and espresso machine.

Be adaptable. As the project progressed, Kurtz had to nix some elements of the redesign that exceeded her budget. For example, a walk-up window is still in the plans, but on hold for now. Building out the window would have cost $5,000 to $8,000, as well as complicated and delayed the city permit process.

Be creative in finding fixtures and furniture. Kurtz had been collecting furniture, especially tables and chairs, in anticipation of opening the Dessert Garage and shopped at flea markets and estate sales for other fixtures to give the space a rustic feel but keep the brand's whimsical personality. Old oven doors were turned into a wall installation, and a wood door was converted into a table. Old shutters frame the chalkboard menus on the exposed brick wall, while small vases with fresh flowers, which cost only a few dollars each, dot the interior.

The Flirty Cupcakes Dessert Garage opened in February, just in time for Valentine's Day, looking exactly how Kurtz had envisioned it. "We will always stay here," she says, but the van continues to roll on, too.