Overnight, the shoemaker fell from champion of American manufacturing to a pariah brand endorsed by white supremacists.

In response to a question about the Trans-Pacific Partnership (TPP) trade agreement, which New Balance (and Donald Trump) opposes because it benefits their competitors, Matt LeBretton, VP of Public Affairs for New Balance remarked, "[...] with President-elect Trump, we feel things are going to move in the right direction."

Neo-Nazi website, the Daily Stormer, subsequently dubbed New Balance the "official brand of the Trump Revolution." And just like that, New Balance became the unofficial cobbler of white supremacists.

This has, in turn, led to a slew of negative press, which has led to negative Google results, which equals major consequences for the brand.

As a content strategist at an online reputation management (ORM) & branding company, my default reaction was: "this is bad for New Balance's brand." In my profession, we have long drawn the connection between online reputation and branding; it can often be a tumultuous love-hate relationship. A negative tweet (from or about a company or person) can take a good reputation and raze it to the ground -- and do so bigly.

If Donald Trump's hypothesis is right, he wielded the power of Twitter and Facebook for next to nothing, and used it to win, even against Hillary Clinton's sizable campaign war chest. Trump told Leslie Stahl during his 60 Minutes interview, "I think that social media has more power than the money [the Clinton campaign] spent."

And he's not wrong. Social media brandishes quite the weapon -- for good or for bad.

Prior to last week, the apparel company was praised by publications like GQ for its patriotic manufacturing practices, saying, "we've lauded New Balance's ability to turn out quality, stylish footwear while maintaining a manufacturing presence in the United States as other brands fled to China, Vietnam and elsewhere."

In other words, a week ago, the company was a champion for America. Now, wearing a pair of their shoes is akin to donning a white cloak. Regardless of whether LeBretton's statement was taken out of context or whether New Balance is pro-Trump or not, the brand's online presence and Google search results can define a brand by defining what is "truth" -- regardless of validity.

Related: Why 'Pixie-Dust' PR Programs Are Bad for Startups

Since LeBretton's statement just last week, a "New Balance" Google search (in New York City) currently shows five negative results referring to the story. That's a big deal for a company that gets searched 3 million times every single month. You are whatever your online results say you are. That's why companies and (individuals) need to be hyper-vigilant about monitoring their online presence, their brand and their VPs. It's a lot easier to keep your brand healthy then rebuild it after a scandal.

A couple of things New Balance could do to rebuild:

No matter how much they deny, it won't hold water. That ship has sailed.

New Balance has made a statement coming out against bigotry, but no one is convinced. Instead, do something positive in the background: initiatives that combat racism, donation of proceeds of a new or limited merch line to anti-hate charities. When this controversy dies down, and they usually do, New Balance can point to its good works.

Get a solid ORM plan in place!

With New Balance's search results the way they are, the company has proven a desperate need for an online reputation management (ORM) firm, and will want to get one in place ASAP. New Balance needs to take control of the online narrative quickly to give them their best chance at rebounding from this fiasco.

To be sure, many big companies don't have solid ORM practices in place, which is why New Balance isn't the first large company to experience a branding snafu due to social media backlash. (Anyone remember the KKK (Krispy Kreme Klub) Wednesdays Facebook ad?) Companies like New Balance most likely have well-paid PR teams to manage bad press, but even they can't be sure how long it'll take to control or suppress the story in search results. 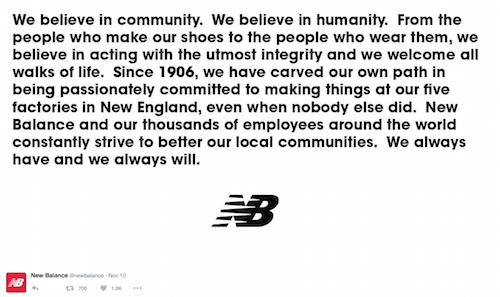 In a recent effort to distance themselves from white supremacists, the company issued a statement denouncing "bigotry or hate in any form." Sure, it's possible that this story may be sufficiently buried a year from now, or it could become a Samsung story that isn't going anywhere anytime soon. In the end, only Google knows, and Google is like the electoral college -- very few of us understand how it works. But we can hope for the best, while preparing for the worst.

Aleks Kang is a senior content strategist of the VIP Department at BrandYourself’s Manhattan office. With a background in marketing and PR, Aleks brings nearly 10 years of SEO, content, and marketing experience to the online reputation management industry. Aside from crafting content and digital branding campaigns for C-suite executives and entrepreneurs, Aleks is a writer and editor whose personal work has been featured in Vice, Huffington Post, among other publications. To keep up with Aleks, follow her on Twitter.