On Starting Up From Three Veteran Entrepreneurs

By Susan Johnston
November 11, 2013
Opinions expressed by Entrepreneur contributors are their own.

The ups and downs of entrepreneurship -- racing to beat a competitor to market, scrambling to fix a server issue, landing angel investors -- can be mentally grueling. Of course, those who've been in the trenches of military service know all about high-pressure situations.

Indeed, veterans tend to be the most fearless among us, says Craig Watters, who administers the Veterans Entrepreneurship Program at Oklahoma State University's Riata Center for Entrepreneurship. Some veterans who've seen combat have been through traumatic situations or even lost limbs in the line of duty, so typically, they're usually "not afraid of taking a risk, and [they] know a calculated risk versus a wild risk."

In honor of Veterans Day, we're shining the spotlight on three young 'treps who've traded a regimented life in uniform for the uncertainty of starting a business. Here's a look at how they got started and what they learned in the process:

When Frost, 26, a construction mechanic, began thinking about life after the Navy, he didn't see himself going to college or working for a big company. "I was getting interested in technology but I didn't know anything about startups," he says. From his tent in Northern Afghanistan, he read Mashable, VentureBeat and TechCrunch, bought domain names, and taught himself to build WordPress websites, none of which took off.

StartupLi.st began as a personal blog where Frost catalogued the startups he was interested in. Then he began interviewing entrepreneurs via email and publishing the interviews on the blog. "The main point of those interviews was to gain insight into what entrepreneurship is to them," he says. That cemented his desire to become an entrepreneur himself, so when Frost left the Navy in 2011, he raised money from friends and family to launch StartupLi.st as a web app for cataloguing startups.

Frost has since cofounded AngelHack, a hackathon with angel investors as judges, and joined the board of directors of VictorySpark, a seed accelerator for military veterans. "You're in this little box in the military," he says. "It's not like that in the real world. You have to be self-motivated if you want to accomplish your goals." Frost says the key for him was discovering his passion for entrepreneurship and pursuing it full throttle. 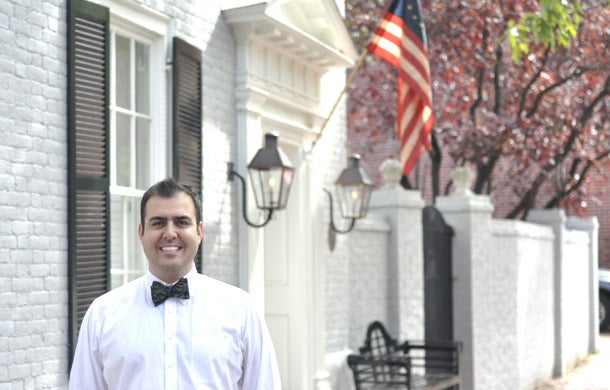 After getting a MBA through the GI Bill, Echeverri launched the Washington, D.C.-based neckwear company Bull+Moose this summer.

Echeverri, 32, volunteered for the U.S. Army following 9/11 and served in Afghanistan. After completing his tour of duty, he worked for the governor of Florida and pursued a MBA through the GI Bill (his expected graduation date is next May). With encouragement from one of his business professors, he launched the Washington, D.C.-based neckwear company Bull+Moose this summer.

Echeverri says his army background aids the business in a few ways beyond the self-discipline and organizational skills you might expect. "Having been in uniform for so many years and knowing how to press your uniform and taking pride in how you dress was really helpful in menswear," he says. The polite, deferential manner he learned in the army also helps with customer service for the two-man shop. "I sir and ma'am everyone," he says.

Bull+Moose is releasing camouflage bowties and neckties this fall and sponsors Got Your 6, a campaign devoted to bridging the civilian-military divide. Got Your 6 falls under the umbrella of nonprofit Be The Change, Inc. His advice for other veterans or aspiring entrepreneurs? "Do something that you are passionate about," he says. "Focus the energy on something you enjoy doing. Only invest what you're willing and able to lose and see if you can use your friends or other people to jump on board and help out."

Kipping-Ruane competed in triathlons and trained the 70 swimmers in his command. When he left the Navy, he started a coaching business.

While serving as a Navy rescue swimmer, now 26-year-old Kipping-Ruane competed in triathlons and trained the 70 swimmers in his command. When he left the Navy in 2010 to study kinesiology and physiology at Penn State University, starting a coaching business seemed like a natural extension of his experience training rescue swimmers. Kipping-Ruane creates coaching plans and provides coaching support via email and skype so he can train athletes anywhere in the world while he earns his Bachelor's degree. "It felt like an easy transition just from being a leader in the Navy and running a training program," he says.

However, the transition from being surrounded by friends in the Navy to navigating a less connected life as a civilian has been challenging, so Kipping-Ruane made a point of seeking out mentors. Becoming a race referee for Ironman and USA Triathlon and reaching out to top coaches helped him find "mentors that had been there, done that," he says. "They liked seeing someone as eager and passionate as I am." Borrowing from the famous Nike slogan, he says would-be entrepreneurs should "just do it and you'll find your way. It sucks at the beginning. But find a mentor and start your business even if you're by yourself."