'By agreeing to those terms, you're actually agreeing to give away your content or contributions to the coach.'

By Mary Simms
August 10, 2016
Opinions expressed by Entrepreneur contributors are their own.

Coaching is an unregulated, multi-billion dollar industry. Many coaches pursue formalized training, but expertise levels vary greatly. Contracts for popular online group coaching programs with a virtual mastermind component can be filled with intellectual property, marketing and financial perils that could lead a business to fail -- sometimes before it even starts.

"It's honestly in some respects a wild west right now, because conventional businesses are aware that they need to protect their rights and this whole online world right now is a bit crazy, but people don't have the resources to go out and pay $400 to 500 an hour to hire an attorney," he says. "They're paralyzed because they know they should be doing something, but they're unsure of exactly what that is."

Related: 5 Ways to Protect Your Small Business Against a Legal Fallout

Bennett says that in general, publishing written marketing materials creates copyrights. But sharing your ideas in a seemingly supportive group session to gather advice could mean someone else publishes it first, and then technically, they would have copyrights to the materials you conceived. Bennett cautions that ideas themselves can't be copyrighted.

Kimberly Bell, CEO and founder of Atticus and an experienced attorney whose niche is negotiating contracts in plain English, says entrepreneurs should be concerned about language that permits their work to be "exploited" (i.e. sold) or refers to their contributions or content as "works for hire." It's the concept that traditionally applies when an employee, in return for a salary, creates something for an employer. 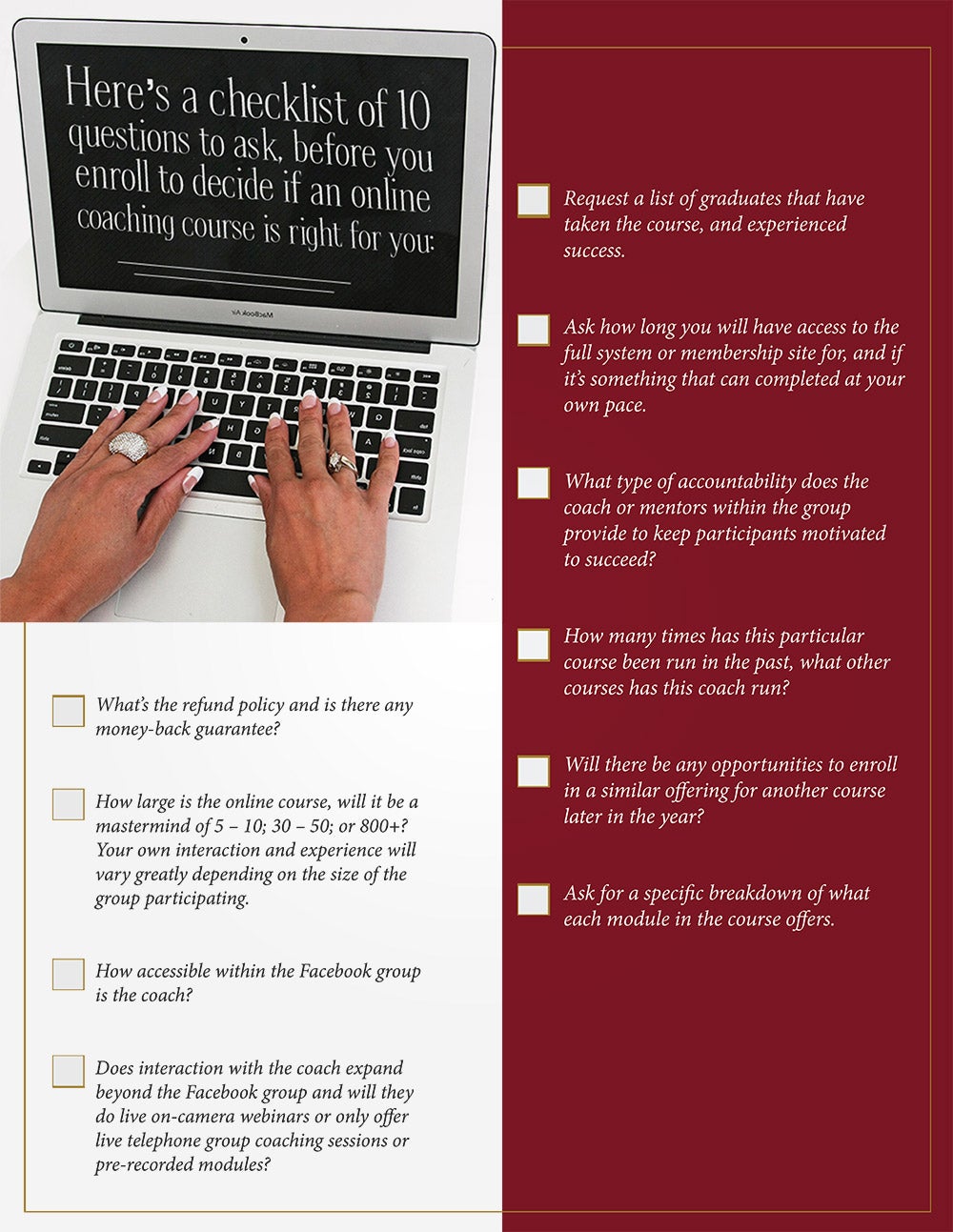 "By agreeing to those terms, you're actually agreeing to give away your content or contributions to the coach," Bell says. "You will not own it anymore, and if you use it again, including in your own business, you will effectively be stealing from your coach and could be sued."

Bell says it's worth remembering that that's not generally what coaches are trying to achieve. "Put that down to over-zealous lawyering!" she says.

Though there are risks, some of the best online coaching programs boast graduates who have merged into the fast lane, making their first million dollars in record time and helping out many entrepreneurs along the way.

In my 20s, I believed in mentors, but not paid coaches. At 34, a serial overachiever and entrepreneur, I've changed my mind and see a great value in both to shortcut the time and expense it can take to make a startup profitable.

In the past decade, I've tripled my income and became a successful media strategist spearheading earned media publicity campaigns that have resulted in many impressions to digital coverage and dozens of front page stories. Like many who find themselves fortunate enough to have worked hard to achieve success, I'm ready to move to the next level, but want to do it without falling off the cliff.

Moments after deciding to resign from my position as a senior spokesperson for the federal government to pursue a master's degree at Harvard University and consult as a publicity strategist, I began to get bombarded with Facebook ads for Luisa Zhou's Employee to Entrepreneur (ETE) program. Zhou offers virtual group coaching programs aimed at working women who are thinking about taking the leap to become entrepreneurs.

Most signing up for an online coaching program don't bother to click on the ubiquitous "terms of service" hyperlink before signing on the digital line. I did. And though ETE seemed to be a comprehensive program, ultimately I didn't enroll because of concerns about the fine print.

Zhou's program and many others, such as Marie Forleo's B-School, include a clause in their often-ignored hyperlinked terms of service that says participants can't say anything negative about the course publically. Clients also often unknowingly consent to an unlimited license that allows future use of the client's name, voice and image along with all postings, ideas and materials shared during the course to be used in the coach's own marketing materials without further permission or compensation.

Related: No Matter How Good You Are at Anything a Coach Makes You Better

Virtual courses are often far more affordable than their traditional counterparts and still can shortcut years of trial and error in the marketplace, helping a business owner skyrocket their revenue.

Allison Maslen International is a San Diego-based coaching firm that works with high-earning entrepreneurs. Maslan and her team provide a more traditional approach to coaching and require each client to sign a confidentiality agreement, protecting the intellectual property rights of each business owner.

"We want the members to feel good about sharing their ideas and collaborating," Maslan says.

Maslan, who has built 10 successful business in the past three decades, stresses the importance of hiring coaches who have actually achieved high levels of success in their fields. She and her team help people to focus year round on the highest-impact activities and have seen many clients double and triple their revenue streams.

Maslan's coaching programs start around $1,400 per month and increase to $4,300 per month -- a price that many entrepreneurs can't afford.

For those with a few hundred to a few thousand dollars to spend, there are seemingly endless options for virtual group courses.

Oprah Winfrey-endorsed Forleo offers B-School. Best-selling author Remit Sethi guarantees to take you from "Zero to Launch," and relative newcomers such as Tracy Timberlake, a YouTube vlogger turned video strategist coach, promises to take you from "Nameless to Famous."

Timberlake credits Zhoe's ETE program and lots of "hustle" for the 60 percent increase she has seen in her monthly revenue since taking the course.

While some programs offer amazing growth opportunities, others charge thousands without providing an equivalent exchange of services. Others require clients to agree to terms that could hurt their growing business and even land the client in legal trouble. Even the most reputable group coaching programs often have a hidden cost the savviest entrepreneurs can miss.

Broad, standard intellectual property licensing terms are an industry standard. They do not provide protection of the enrollee's work or intellectual property. Some programs, such as Sethi's Zero To Launch, even included a "work made for hire" provision in its latest offering. After being contacted for this story, Sethi removed that clause.

Most high-profile coaches aren't willing to negotiate their contracts, and for some entrepreneurs, it may be worth the risk to gain access to the collaboration, networking opportunities and insights at a fraction of the cost of one-on-one coaching.

Organic food entrepreneur Torah Bontrager and author of the forthcoming book, An Amish Girl in Manhattan: A Memoir, has spent more than six figures on virtual and in-person group coaching programs since 2009. A Columbia graduate, she is committed to personal enrichment and says it's imperative to evaluate each course for value and check real-life references, no matter how good the copy sounds.

"If they're not willing to offer some sort of money-back guarantee, I don't sign up," Bontrager says.

Bushra Ahzar is a Saudi Arabia-based consultant turned persuasion strategist and founder of what she calls "the Persuasion Revolution." Ahzar offers a money-back guarantee for her "Sold out Launch" program, entering its third year. She took Forleo and Sethi's courses before creating her own course and in her first two years in business has generated more than 1.2 million in revenue with a raving fan base.

Ahzar has had her intellectual property ripped off from fellow students while going though both B-School and ZTL. Now, with her own course, she's still battling as a coach and following up on multiple intellectual property claims from people who have stolen entire pages of copy and other materials, taglines and copy from her website and courses.

Related: I Lost $3 Million In One Day. My Business Was Gone. But These Are the Steps I Had to Take First to Bounce Back.

"You come to groups looking for ideas, or to validate an idea," she says. "If someone has 200 comments and everyone is saying, 'Oh my God, I want this. When are you releasing it?' If they don't have a business idea, they look at it and say, 'You know what, this is a validated business idea. People are clamoring to get to this. Why can't I just take this and run with it?' That's basically what happens in groups."

Online mastermind and coaching groups can be a great way to network and fast-track success if you make sure you're investing in a worthy course and take steps to protect your intellectual property. Unlike employees or freelancers you can hire to do certain jobs for you, when you pay a coach or consultant, you're paying a premium for their expertise and for them to tell you what to do, not do it for you. Once you make the investment, you've also got to be willing to do the work.

Finding a great coach is just the first step. To reach news levels of success, as Timberlake puts it, you've got to "be willing to hustle."