Growing up means learning how the world works. You learn things like what it means to study and do well in school, how to cook for yourself, how to nail a "business casual" dress code and what it takes to land a steady job.

If entrepreneur Jay Silver has his way, though, growing up won't mean learning how the world works; it will mean believing you can make the world work however you want it to.

Hoping to teach children to think outside of cultural and social norms, Silver has made two invention kits that can turn an everyday object into a computer keyboard, game controller or mouse. The slice of pizza you are eating for lunch can become your computer's space bar, for example. It's kind of trippy to imagine, but that's precisely the point. Silver, very intentionally, wants to get your brain outside of its comfort zone. 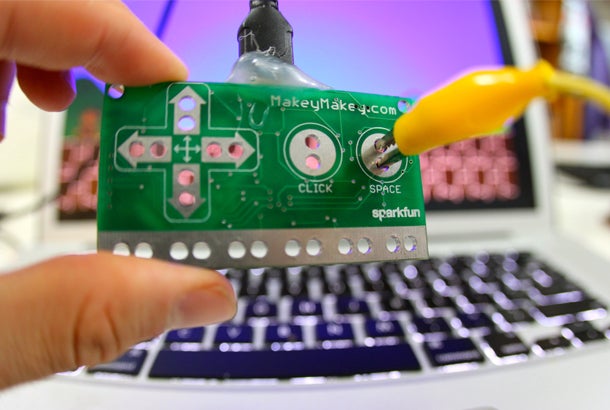 "I really felt like people need to be freed. And that's what this whole thing is about," says Silver. He wants to inspire human beings to reconsider what they see in their world and what they take for granted. "My best talent is giving people tools and facilitating situations where people can realize that the world they live in is repurpose-able, reconfigurable. They can build it. Someone else doesn't own the world. You own the world."

The first generation Makey Makey do-it-yourself electronics kit includes a connection board, a USB cable and some alligator clips and allows you to turn almost anything into a computer touchpad. Really, almost anything. The Kickstarter campaign, which Silver launched in May 2012, was a blockbuster success, raising more than half a million dollars from more than 11,000 backers.

Silver's toy not only exploded on Kickstarter, it also generated quite a buzz in the world of tech gadgets. It was ranked as one of the 10 Best Toys at the Toy Fair by Popular Science, included in a closely-watched Consumer Reports roundup of the 6 Terrific Tech Toys of 2014, and was inducted into the Museum of Modern Art's collection of "Humble Masterpieces."

Silver lives by the same invention kit ethos that he preaches. He and his wife, Jodi, have a commitment to follow their intuition and pursue new dreams when it feels right. That "dream big and dream again" philosophy led them to leave the cold Boston winters; Silver dropped out of MIT's Lifelong Kindergarten PhD program in December 2011, and he, Jodi and their young son moved to Yogaville, a spiritual community in the foothills of Virginia's Blue Ridge Mountains.

Related: The Happiest People Know Their 'Flow State.' What's Yours?

It was there that Silver decided to launch the Kickstarter campaign for his gadget toy -- only it wasn't as easy as opening a new browser. To get Internet, he needed to plug into his nearest neighbor, who was about 500 feet away, but was only able to get his hands on strands of Internet cable that ran 400 feet at a stretch. So he bought a 400-foot cable and a 100-foot cable, hauled them through the woods and protected the connection point of the two cables with a Tupperware container he had weatherized with a hot glue gun. Silver's treetop macguyvering worked. 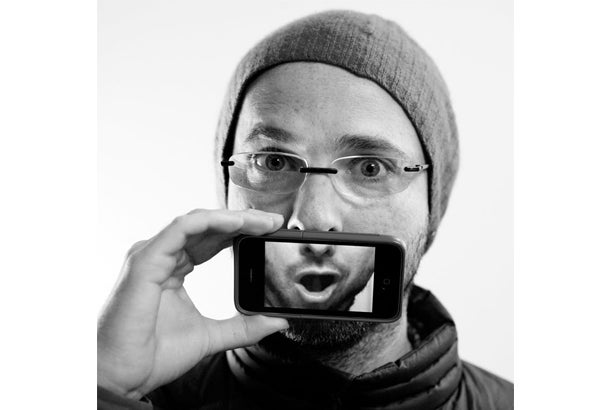 Shortly after the first Makey Makey Kickstarter launched, Silver and his family moved to Santa Cruz, Calif., where Silver accepted a job as the world's first Maker Research Scientist at Intel. It was a "dream job," he says, but working full-time at Intel and working full-time to keep JoyLabz running (JoyLabz is the name of his Makey Makey toy kit company) was unsustainable. Silver left his job at Intel in November 2013. Thus far, JoyLabz has sold more than 200,000 Makey Makey kits and has a total of four employees.

When Silver did go back to finish his PhD at MIT, completing it in September 2014, he used the Makey Makey as the subject of his thesis,"The World is a Construction Kit." And his idealistic, change-the-world, one pizza-slice-as-a-space-bar tune has earned him over a million views on his TED talk, which was filmed April 2013.

"I used to want to design a utopian society or a perfect world or something like that. But as I'm kind of getting older and kind of messing with all this stuff, I'm realizing that my idea of a perfect world really can't be designed by one person or even by a million experts," he says in the TED talk while sporting colorful shorts and a blue hoodie. "It's really going to be seven billion pairs of hands, each following their own passions, and each kind of like a mosaic coming up and creating this world in their backyards and in their kitchens. And that's the world I really want to live in."

Silver's philosophical vision is light years bigger than the banana pianos he hawks. But covering the grandiose with the goofy is kind of like weatherizing an Internet cable connection with Tupperware and a glue gun -- it's Silver's sweet spot, and it works.