By Laura Entis
March 3, 2015
Opinions expressed by Entrepreneur contributors are their own.

When we spoke last April, Kegan Schouwenburg's company SOLS, which makes custom 3-D printed orthotic insoles by scanning customers' feet, had just completed a $6.4 million Series A funding round. Fast forward less than a year, and this New York-based startup just raised another $11.1 million in financing.

The interim period between funding rounds has been pretty insane for Schouwenburg and her team; since last spring, the company has grown its network of podiatrists, orthopedics and physical therapists from 50 to around 330. (SOLS provides each doctor with an iPad equipped with its app that, using a process called photogrammetry, takes hundreds of photos of a patient's feet and knits them together to create a detailed virtual model.)

But the even bigger news is that SOLS is about to launch a direct-to-consumer line of insoles. Instead of having to visit a doctor, buyers will soon be able to scan their feet at home, via a smartphone app, and order the insoles online. It's a pivotal moment for the company -- one that marks its transition from niche medical product built exclusively for people with advanced foot problems (at $300 to $700, SOLS medical insoles don't come cheap) to a product intended for anyone looking for a more comfortable walking experience. At a much more affordable $125, the direct-to-consumer insoles are available for pre-order and will launch in May.

Schouwenburg's own background may be firmly rooted in design, but SOLS has recently forged a strong relationship with the athletic community. Terdema Ussery, president and CEO of the Dallas Mavericks, just joined its board, and the company's latest funding round included a new investment by Melo7 Tech Partners, the venture fund co-founded by NBA Knicks star Carmelo Anthony.

Though Schouwenburg is not an athlete, she understands why SOLS appeals to the sports and performance sector, where "everyone is just looking for that extra cutting edge." The NBA, she's come to learn, is incredibly tech-forward. "They're really excited about the applications of how data and analytics and wearable technology can affect the game," she says.

During this year's New York Fashion Week, SOLS partnered with the NBA to launch a futuristic robotic 3-D shoe – "something that could exist 10 years from now" -- which debuted during an NBA All Star Weekend event hosted by Carmelo. Christened the "ADAPTIV" the 3-D printed shoe merges fashion and performance; embedded with LED lights, whose colors shift to match the wearer's outfit, the shoe is also outfitted with shock robotics that inflate or deflate based on the wearer's movements, decreasing the risk of lower extremity injury. 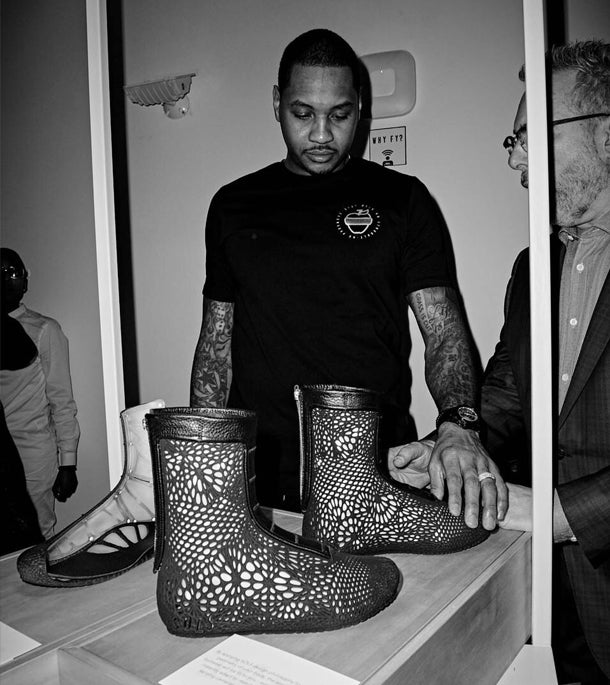 Related: How 3-D Printing Startups Are Shaping the Future

SOLS has already struck up a partnership with Destination Races, a boutique marathon series, and is in the process of talking to gym chains as well as major professional sports teams, in both the NBA and in other leagues, Schouwenburg says.

What's more, the company plans on launching a line of sensor-enabled insoles this summer that would allow wearers to monitor their fitness and health stats – a la a Fitbit – via their feet. "Look, a lot of people don't want to wear something on their wrists," Schouwenburg says. "I've heard that enough times now that it's really resonated."

Despite the cutting-edge results that have already come to fruition thanks to SOLS newfound athletic cachet, Schouwenburg wants to keep the focus on everyday consumers, people who may or may not play sports at any level, much less professionally. For her, SOLS insoles are about making life more comfortable, whether that means jogging in the morning without getting exhausted, fixing a real medical need, or simply not feeling the need to take one's shoes off in the elevator after work.

"There are so many people in this world, who have so many different kinds of problems," she says. "But we all get up every day and put on our shoes. We want to make that experience a little bit better for everybody."