Brad Montague explains how he and his 10-year-old brother-in-law Robby Novak have become accidental superstars.

Reaching 32 million people with a single video is the kind of viral sensationalism brand executives fantasize about. For Brad Montague, the founder of Kid President, it was almost accidental.

"I make silly videos for YouTube," says Brad, with a warm, self-deprecating humility that speaks to his small-town Tennessee upbringing.

Those silly YouTube videos have pretty lofty ambitions, though: Brad wants them to bring more good into the world.

The Kid President series is a collection of short videos featuring Robby Novak, Brad's energetic 10-year-old brother in law, who playfully dispenses his views on how to make the world a "less boring" place. The underlying theme is that we can all do little things to create positive change.

The first Kid President video that the duo posted in July of 2012 got 200 views. The second got 2,000. At that point, Brad and Robby were already impressed. "That is our whole town! Our whole town watched the video!" Brad recalls.

Little did they know they were just getting started. Their most popular video so far - "A Pep Talk from Kid President to You" -- has been viewed almost 32 million times. In it, Robby encourages viewers to take the "road less traveled," as advised by poet Robert Frost. But then, in recounting the difficulties one can encounter on that road less traveled (i.e. - "rocks!" "thorns!" "glass!"), Robby declares, "Not cool, Robert Frost!" If there are two paths, then Robby, sitting in a football locker room, informs the viewer that he wants to be "on the one that leads to awesome."

The Kid President videos feature Robby in a suit and bright red tie, talking directly to the camera, bursting with earnest energy and happiness. He sounds as though he has about half a dozen marbles in his mouth, which makes his cuteness irresistible.

And he dances. In every video, you can see Robby busting a move. (His "pencil sharpener" brought tears of joy to this reporter's eyes.) If Robby's fearless dance moves aren't adorable enough on their own, then consider that this little man has a brittle bone condition, called osteogenesis imperfecta, which has resulted in his having over 70 broken bones already. Knowing that, his dance moves become even more poignant.

Together, Kid President Robby and Brad have met President Obama, music star Beyonce, actor Nicolas Cage, and author Nick Hornby, just to name a few. The Kid President YouTube channel has been picked up by the creative media channel SoulPancake, which has 930,000 followers, and has given the web series a traffic boost. SoulPancake was created by actor Rainn Wilson (Dwight, from the popular sitcom, The Office) and a couple of his buddies to create a space where people could wrestle with life's biggest problems. 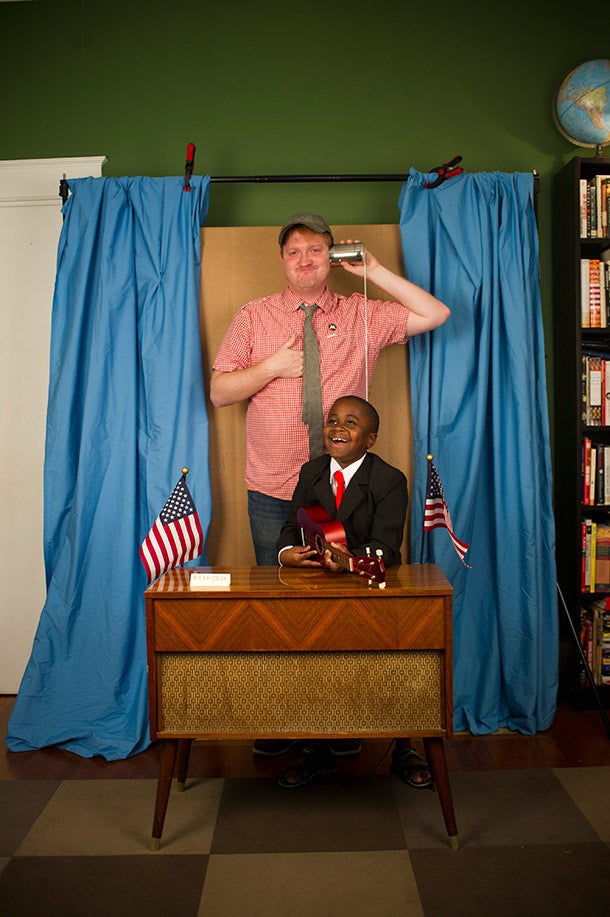 Brad says their success has been a blast -- if a bit of surprise. Before Kid President, Brad made all sorts of videos as a side hobby, and nobody seemed to care much for his creations. In fact, The Kid President videos started out as a way for Brad and Robby to spend time together.

The Kid President secret, Brad thinks, is the sincerity and innocence of the message. "The Internet, in general, is a dark place. It is easy to be cynical. It is easy to post your opinion everywhere in all caps and yell," Brad told Entrepreneur.com at The Feast social innovation conference in New York City in October. "And for something to come out that has no agenda other than to be happy and full of love is kind of weird."

Weird, maybe. Quite inspiring, too, according to the YouTube-watching public.

In early October, Brad left his full-time job to take control of the brand (though Brad hates the word "brand") and focus on what to do with it next. "The moment that went viral, we had to sit down and say, 'We could go anywhere right now. What do we want to do?'" says Brad. "At that point I was just happily making videos in creative person la-la land."

When Brad and Robby's videos started surging in popularity, everybody had advice for Brad about how he should best capitalize on the newfound voice. After careful consideration, Brad has decided to continue to make Kid President videos, write a book, and work to connect with schools across the country to empower students, teachers and families. He is still figuring out the finer details of what the future of Kid President holds - "aside from completely taking over the world, obviously."

Every Company Has the Potential to Enter the Space Economy. Here's How.

The space economy is worth nearly $500 billion — why wouldn't you want to get involved if you can? Use these four tips to find out how you can get started.

5 Reasons You're Stuck In the Weeds, Instead of Spending Your Time Strategically

Follow this advice from over 100 top CEOs to become less busy and more successful.