"That's one-word: Meetup, with a capital M and not a capital U. People sometimes screw that up," says Scott Heiferman, as he speaks to me from a couch in the middle of his company's New York City headquarters one Tuesday in November. "I am a bit of a brand design freak." The main Meetup office is one long, open room with workstations that all look nearly alike. Everything is accented in red to match the Meetup nametag logo.

Heiferman doesn't beat around the bush much: He's what you might call a straight shooter. He swears a decent amount and is aggressively focused on growing Meetup, the site he founded that allows people to create social events around a common activity or interest.

Officially founded in 2002, Meetup has kept a relatively low profile for a global company with an impressive and growing global reach. That's kind of on purpose. Meetup has zero marketing, communications, public relations, business development or partnership-building staffers.

Related: The Brilliance of Failure, In the Words of a Self-Made Billionaire

Meetup also doesn't run ads. Heiferman says advertisements are distracting and ugly. In fact, when he checked out Entrepreneur.com before his conversation with me, he was ultra-annoyed by the ads he encountered. And he made sure to point that out.

More than 10 million events have been scheduled through Meetup, which hosts more than 140,000 groups worldwide. International growth has been the fastest of late, and hot spots of growth include France, Spain, Asia and India. The number of non-U.S. meetups has doubled in the past year. 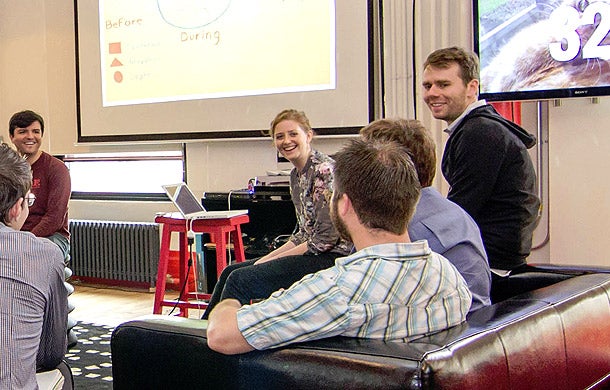 Hefierman is perched on the arm of the couch in the black sweatshirt.
Image credit: Randy Au from Meetup

To keep pace with the growth, Meetup has been hiring as fast as it can, says Heiferman. The night before this interview, Heiferman had been out on a "Meetup crawl," wherein a handful of new employees drop in on a half-dozen Meetups near the corporate headquarters in Lower Manhattan. The latest batch of new hires dropped into a Scottish dancing Meetup, a robotic hacker Meetup, a Meetup to learn how to speak English, a pickling Meetup and an Arabic-language Meetup, among others.

Related: 10 Trends for 2014: We Seek Imperfect, Human Moments. With Our Smartphones at the Ready.

The concept for Meetup started germinating in the wake of the September 11th terrorist attacks, when Heiferman was living in Lower Manhattan. Heiferman met, talked to and connected with more of his neighbors in the days following than he ever had before. And he was touched by the power of simple, local community. "The germ of every Meetup and all this good stuff that comes out of it is the opportunity to say "Hello,'" says Heiferman.

And what power there is in the Meetup "hello." Everything from business to love has been born from the connections generated on Meetup. For example, once-upon-a-time investment banker Dale Choonoolal used to run soccer Meetups in and around New York City as a way to meet fellow sport enthusiasts. The Meetups were so popular that Choonoolal ditched his finance job and has been able to earn as much as six figures in a year just running soccer Meetups. In one of those co-ed soccer Meetups, two members – Justine Freitas and Bikash Gurung – met and ended up getting married. 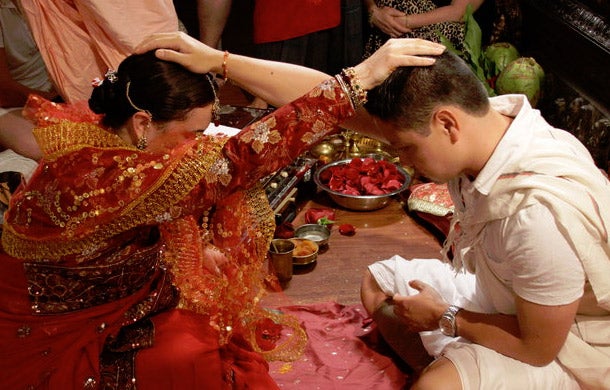 Justine Freitas and Bikash Gurung met at a soccer Meetup and ended up getting married.
Image credit: Dale Choonoolal

Meetup's revenue comes from Meetup Organizer user's fees: Organizers pay $19 for one month's access to the Meetup network, $45 for three months or $72 for six months. Attendees, who account for about 98 percent of users on the site, pay nothing to sign up for the Meetup service. Also, Meetup has very recently started giving Meetup Organizers the option to collect dues from the attendees on the website. Meetup collects a processing fee for that service.

Use of Meetup in the U.S. generally trends with the population density, but there are some cities where Meetup is used more heavily than others. For example, the Raleigh-Durham area in North Carolina is especially Meetup-dense, notes Heiferman. "If you wear a Meetup t-shirt down there -- and I have experienced this -- it's like Jesus down there." While people like to come up with reasons why certain cities are more Meetup popular than others, Heiferman doesn't buy it. "I think it is the randomness of serendipity that something just -- catches wind."

Heiferman is a big believer in the importance of timing. And he has also learned to trust his own intuition. After leaving a successful career in advertising and before launching Meetup, Heiferman started a photo sharing social network called Fotolog. This was in the first couple years of the new millennium, and Heiferman says his concept was too early. People weren't as comfortable with taking, posting and sharing images as they are now. Also, the average smartphone camera was not good enough to make taking and sharing photos as rewarding as it is today. Heiferman sold Fotolog in 2007.

As wrong as he was about the timing of a photo-social site, Heiferman says he is perfectly on target with Meetup. "The prime-time for Meetup is still a few years away," he says.

If Heiferman is correct, we will be hearing a lot more about Meetup in coming years, even if not from Meetup directly. That's because, despite their mission of bringing groups of people together, Meetup staffers aren't much for talking with other businesses. "We don't take meetings. We don't talk to anyone. We just focus on the product. And we are growing like hell," says Heiferman.

To which this reporter could only ask: "So why are you talking to me?"

Heiferman smiles a bit. "To make sure we are not being so weird," he says.