With ridesharing, there are opportunities far beyond just driving -- if you handle them the right way.

By Harry Campbell
April 24, 2018
Opinions expressed by Entrepreneur contributors are their own.

Excerpted from The Rideshare Guide: Everything You Need to Know about Driving for Uber, Lyft, and Other Ridesharing Companies.

Other money-making opportunities for drivers

There's no shortage of companies looking to launch products and services for drivers, but I can tell you from working with many of them that it's a long road. It's easy to come up with a name and slap a landing page on a website, but developing, launching and marketing a product to drivers across the country is a big challenge.

During your time as a rideshare driver, you'll probably encounter lots of these companies and it's important to evaluate each one on its cost, potential and hassle factor. I'd be wary of any company that doesn't have a solid track record and good refund and return policies if it costs money. 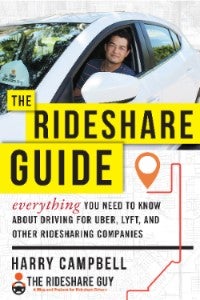 Below are some other unique ways drivers have made money:

Networking is the name of the game.

After a while, you may find that you're meeting tons of interesting people and may even want to stay in contact with some of them. I like to keep things professional but there are countless opportunities for networking if that's what you're after.

Try to take advantage of the opportunities that come your way. Below are a few examples of how drivers have benefited from networking:

Rideshare driving can also open up possibilities to funding a new startup as Mystro founder Herb Coakley discovered. As a driver, Coakley thought it was unsafe that drivers had to switch between Uber and Lyft to pick up passengers and knew there had to be a better way.

He moved to San Francisco to pursue his idea. One day while driving rideshare, he pitched one of his passengers on the idea. The passenger turned out to be an investor, loved the idea, and ended up funding part of Mystro's seed round.

How to respectfully push your side hustle

One of the things that attracts a lot of drivers to this gig is its entrepreneurial nature. You get to be your own boss and see a correlation between how hard you work and how much money you make. So, it isn't surprising that many drivers have side hustles in addition to being a rideshare driver.

You are free to promote your side hustle, but it's important that you do it respectfully so as not to hurt your rating and so that your passengers might actually listen to what you have to say. Below are a few examples of how some drivers have accomplished this:

Peter -- Do Your Park

Peter Vandendriesse started driving part-time for Uber and Lyft all the way back in 2014 in addition to his full-time job as an art director. He's also an entrepreneur, having founded a company called Do Your Park that aims to call out bad parking jobs by allowing customers to slap a small "you suck at parking" citation on the cars of bad parkers. Each magnet is reusable and displays a witty saying and illustration. Vandendriesse uses trivia with his rideshare passengers and passes out a single magnet if they're able to answer his questions correctly. That way, instead of him pushing his products on passengers, it feels more like a reward!

Janet is a full-time licensed massage therapist, but when business is slow, she drives for Uber. A lot of passengers end up asking her what else she does, and at that point, it's pretty easy for her to talk about her other business. During Christmastime, she likes to offer gift certificates for her massage specials.

Speaking of side hustling, New York Times bestselling author Chris Guillebeau says that you should focus on what makes you special as a driver. He recommends drivers think like entrepreneurs if they want to break out beyond rideshare driving. Guillebeau also says you should have a backup plan in case your first entrepreneurial endeavor fails -- you don't have to tell anyone about your backup plan, but make sure to have one.