Should You Let Your Workers Sleep on the Job?

By Carol Tice
July 20, 2011
Opinions expressed by Entrepreneur contributors are their own. 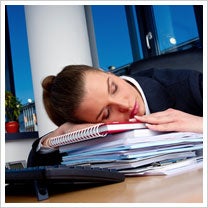 For decades, it's been cause for firing -- even considered a disgrace. But should napping on the job be so maligned?

Dozing off at work has long served as a great way to be branded lazy, incompetent or even dangerous, as were air traffic controllers when recently caught napping.

But many experts agree that napping when you're tired is a good idea. A "power nap" of 15 minutes or so has been proven to improve your alertness, reaction time and creative abilities.

I used to have a roommate who kept late nights. She worked for her aunt in the communications department of a Beverly Hills talent agency.

I'd often come down to see if she wanted to go to lunch, only to find her sound asleep on a couch. Shouldn't I wake her up, I'd ask her aunt?

"Oh no," she'd say. "I want to get some real work out of her this afternoon."

Back in the dot-com era, all the hip companies had a nap room where workers could go catch 15 minutes. When you're working long hours at a startup, encouraging power napping makes a lot of sense. But in recent years, company-condoned nap times have largely nodded off.

Weighing against naps is often owners' fears that workers will abuse the policy and party all night, knowing they can catch 40 winks at lunchtime. It can be a delicate balance to introduce a nap policy without having your workplace turn into a place to get paid while you sleep.

But think of the opposite scenario: When you forbid naps, that policy often translates to a staff of half-conscious workers propping themselves up, inhaling junk food and sucking down java in order to present an imitation of an alert employee. Behind the facade, they're just marking time for the rest of the day and not really getting much accomplished.

With that in mind, I think my friend's aunt hit the proverbial nail on the head: When you want a productive -- even creative -- staff instead of glazed chair-warmers, naps can be a way to get it. But it takes a little progressive thinking to make it part of your small business' culture.

Thinking about allowing naps? Here are a three tips for making power napping a plus at your business:

Do you let your workers nap on the job? Leave a comment and tell us your view.