By Brian Patrick Eha
May 29, 2013
Opinions expressed by Entrepreneur contributors are their own.

Guido Campello's life revolves around underwear. As a child in Miami, the son of Italian immigrants played with the luxurious fabrics his parents brought home from their business. After school, he did his homework in the office of his family's intimate apparel company, Cosabella.

Now, on a sunny Thursday in March, in the showroom of Cosabella's flagship store in New York City, the 32-year-old passionately explains one of the brand's new concepts for fall: fluorescent thongs and bras that glow under black light. The colorful undies glow because of special fibers -- developed by Campello's father Ugo -- that are woven into the lace.

Some women today are wearing lingerie as an accessory, not just a functional undergarment, Guido says. "So when they go out, like when they're out at the club or the right restaurants, you're going to see that [bra], because they've got black lights all over the place." Usually this is just a "pop of color" from a bra strap peeking out, Guido says, but young women at dance clubs and other nightlife venues may dress to show more.

Cosabella's story is one of immigrant success, innovative design and a determination to collaborate in a family business full of strong personalities. Having begun 30 years ago with a $120 order and only six styles of lingerie, Cosabella now sells more than 1,620 styles of lingerie, daywear, loungewear, sleepwear and sportswear in more than 90 countries. In the course of its history, the company has designed more than 100,000 unique individual items.

The fluorescent underwear is part of the company's growth strategy, which also includes a new, lower-priced line for JCPenney called Amore. "We need to capture the new consumer, the young girl, the one who's just starting to wear lingerie," Silvia, Guido's 35-year-old sister and Cosabella's head of operations, says. The key to the longevity of the brand, she says, lies in creating a "seamless transition" from Amore to Cosabella, with young customers aging into the more grown-up styles. Through such diversification, Cosabella hopes to increase its small share of the U.S. market for intimate apparel, which topped $10.6 billion last year, according to research firm NDP Group. 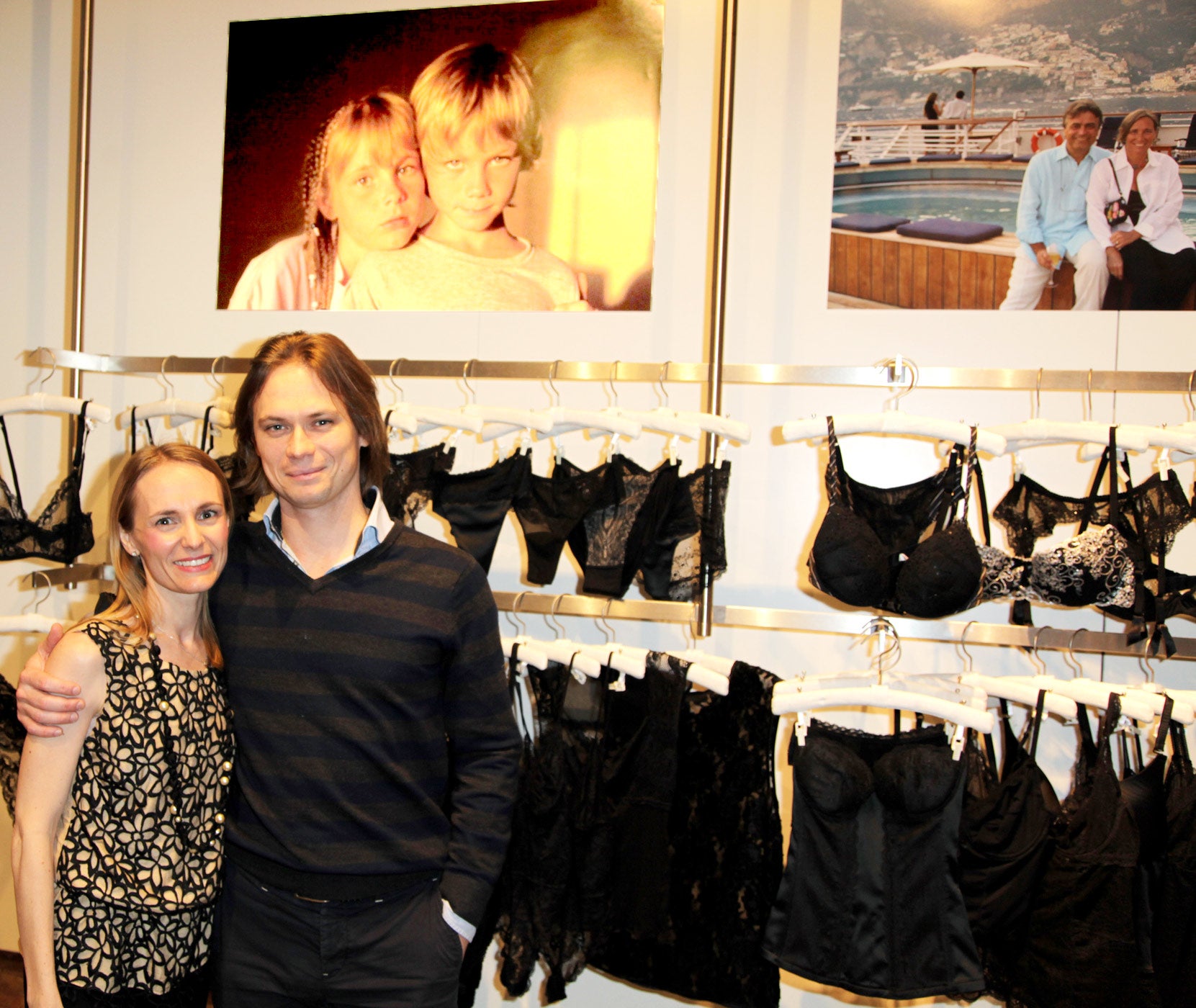 Silvia and Guido in the Cosabella flagship store during the 30th anniversary party on March 14, 2013. Above them hangs a picture of the siblings taken in 1986.
Image credit: Cosabella

Ugo Campello, an engineer, and his wife, Valeria, came to Miami in the early 1980s, intending to stay for eight months. It was a temporary work opportunity for Ugo. Valeria, who had trained as a lawyer in Italy, soon found herself bored with sitting around the house. "I need to do something for myself," she says she thought at the time. Carpi, her hometown in northern Italy, has a tradition of textile manufacturing. So, she called people there and ordered items to sell in Miami, first to her friends and then to local stores.

Realizing there was demand for Italian products in the U.S., but that she was too shy to sell, Valeria hunted up a salesman, Sergio Oxman, who became a partner in the new business. "He was the perfect complement to Valeria," Ugo says, adding that while Oxman was a phenomenal salesman, Valeria "was the real mind behind the whole project." Oxman left the company amicably in 2005, with the family buying out his stake and Guido replacing him as head of sales. Oxman did not respond to an email requesting comment by press time.

Although the company was founded in 1983, its brand identity only began taking shape three years later. In 1985, Ugo left his engineering job to work full-time for Cosabella. A few months later, the lira began strengthening drastically against the dollar. The cost of his merchandise was "going up by the minute," he says. Within 18 months, costs were twice as high as before. Meanwhile there was a flow of cheap products from China. Suddenly, made-in-Italy Cosabella wasn't competitive. 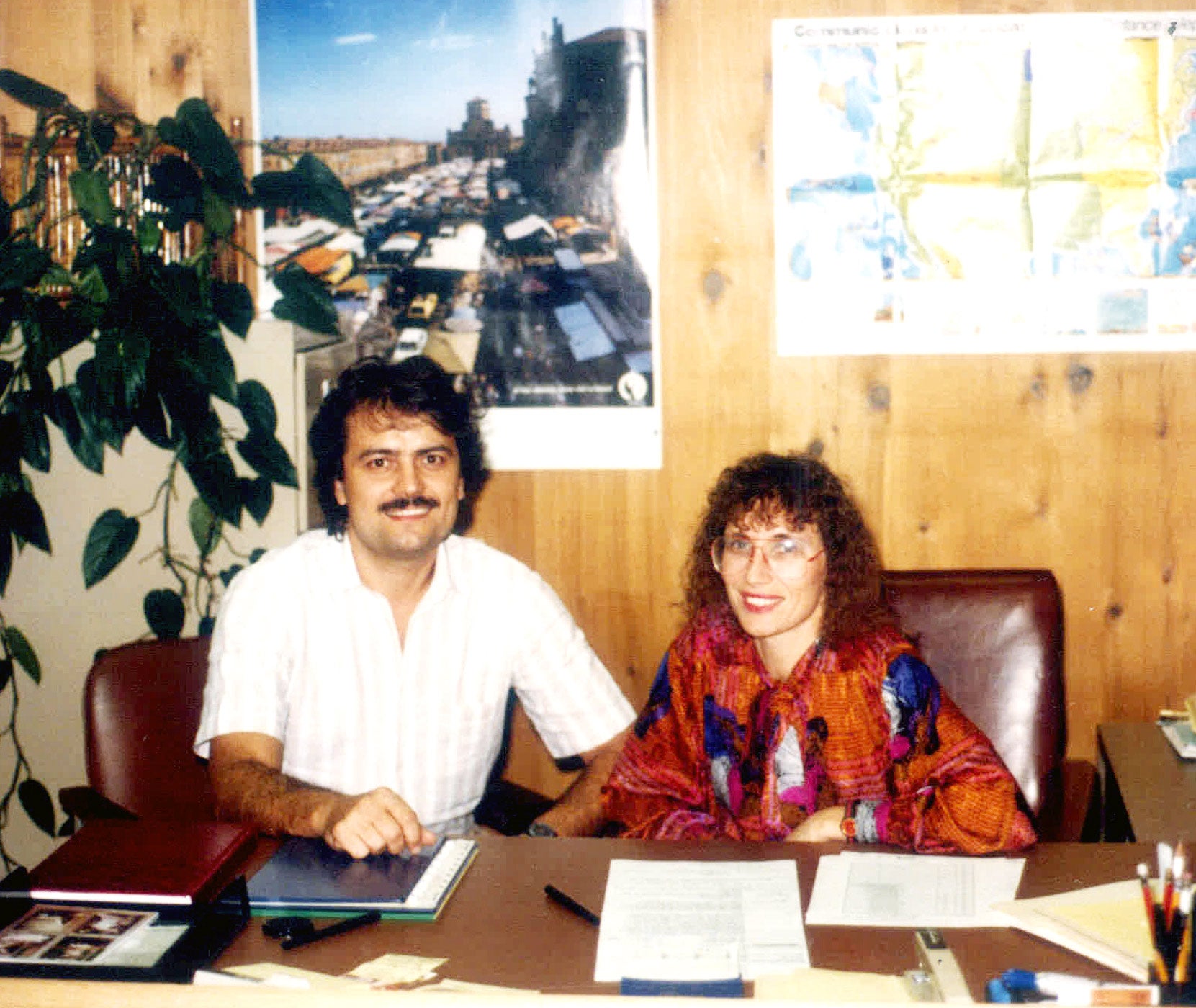 In response, Cosabella started its own line of lingerie, with manufacturing operations in Italy, and stopped importing products from other manufacturers. Ugo designed the new line, starting with simple cotton items and eventually expanding into lace, hosiery and other fabrics. By positioning itself as a luxury brand with Italian provenance, the company no longer had to compete on price, and began making a name for itself in boutiques and high-end department stores. In a pattern that would repeat itself over the next few decades, Cosabella emerged stronger from the crisis.

Guido knows all about Cosabella's longevity. As a young man, he was made to sort through and organize hundreds of boxes of fabric and old product samples in the Miami warehouse. Like his older sister, Guido grew up "living, breathing, eating Cosabella," Ugo says, adding however that his children were free to choose their own course in life. For Guido, the hands-on education yielded benefits.

After Oxman announced his desire to leave, Valeria and Ugo gave their children a choice: either buy out Oxman or sell the company and divide the cash. Doubling down on the family business has paid off: In 2011, Cosabella sold three million units globally. In 2012, it sold about 3.5 million, and projections for 2013 are four million.

Its largest market is the U.S., followed by Italy. Russia and China are also important, Silvia says. "The focus needs to be on a balanced global approach. The U.S. can't stay number one. It's only a small piece of the world." 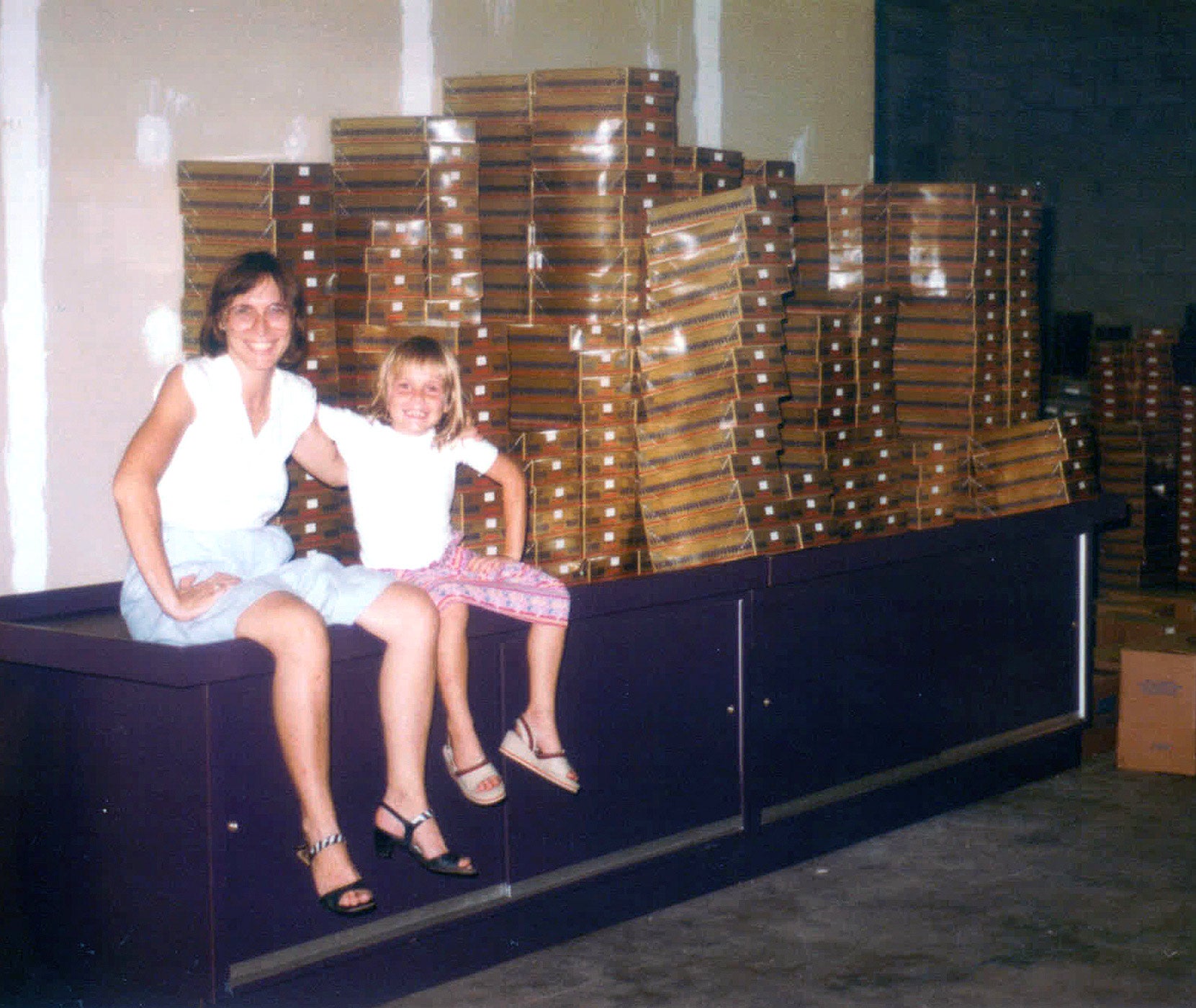 As in many family businesses, there's friction sometimes. Each family member has autonomy over his or her own area of expertise, and at times, Guido says, "Each of us thinks our own function is the most important." Sylvia agrees. "I can't do what Guido does, and he surely can't do what I do," she laughs. "There are passionate flare-ups sometimes because we each see things differently."

The fall 2012 collection pitted Ugo and Valeria against their children. Not long before the collection was due to be released, Ugo, who at age 65 still leads design for Cosabella, got excited about a seamless tube of cashmere fabric. He realized that by cutting armholes in the tube, he could create an item that could be worn 14 different ways, in various permutations of scarf, shirt or dress. "When Ugo gets into these things, no matter what else is going on, he feels enthralled by discovery," Guido says. "The moment he got my mother excited about it, my sister and I completely lost control of the situation."

The next three months were maddening for the staff, as Ugo diverted "everyone's attention from design, marketing, sales and production to make this tube the focus of the collection for that season," Guido says. Eventually, he came to realize the emotional toll of "blocking my parents' enthusiasm" would be more costly than making the effort to deliver the tubes to their customers. Everyone pitched in to make sure the product hit stores on time, and "The Tube," as it's called, was a success.

"I had a real fight on my hands," Ugo says when asked about that time. "I understood [Guido's] position, but I'm for innovation. Probably I took away some energy from other areas, but as vice president of design I had to push for something new conceptually, because that's what makes Cosabella different." 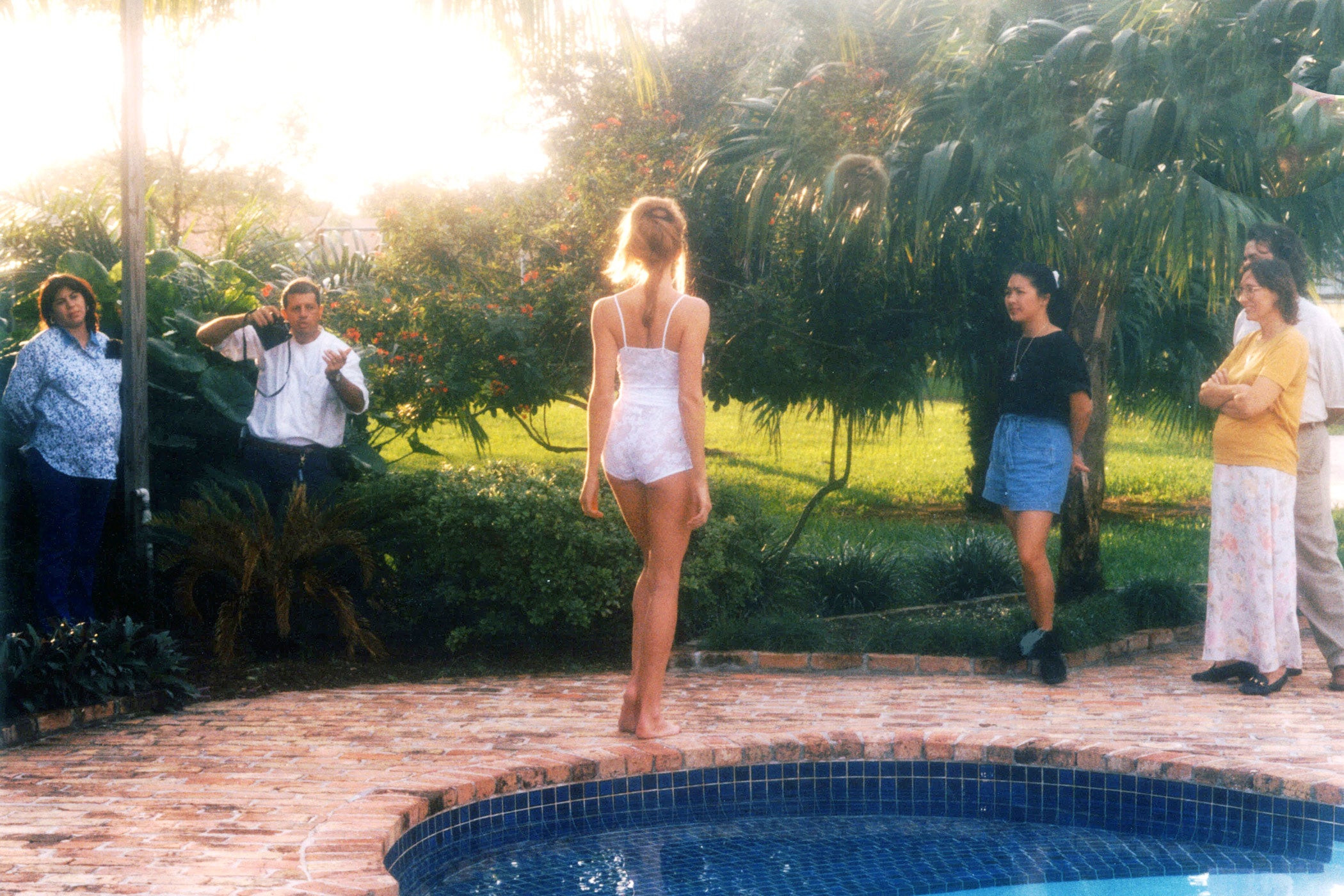 Ugo and Valeria oversee a Cosabella photoshoot at their Miami home in 1997.
Image credit: Cosabella

"It is very difficult to keep the temperature down in those situations," says Guido, who is based in Manhattan, while the others live in Miami. To put out fires, twice a week the family holds a teleconference. The first, on Wednesday morning, is a family-only meeting in which everyone evaluates his or her "emotional priorities," Guido says. The second, on Wednesday afternoon, includes chief financial officer Mike Bernstein and is strictly business.

Out of what Guido calls "the Tube caper" came a greater understanding of how to mobilize teams for company-wide efforts. Cosabella has no single leader, and the family makes major decisions by committee whenever possible. Guido, however, is often the one out in front, attracting partners and signing deals. "Guido has a great quality to be a visionary. He's the one that flies high," says Ugo, who acknowledges that he sometimes conflicts with Guido on product design. "While Silvia on the other side has her feet very solidly on the ground, and controls the way Guido is flying."

As head of sales, Guido has initiated partnerships with designers and television studios. The fall 2013 collection includes a shaping bustier with three-quarter-length sleeves called the Betsy Bra, named for its creator, Betsy Heimann, the costume designer for Pulp Fiction, Almost Famous and other films. "Cosabella were the only people I was interested in collaborating with," Heimann says, "They have the fabrics, they have the tech, they're a family company. I didn't want to get lost in a big company." 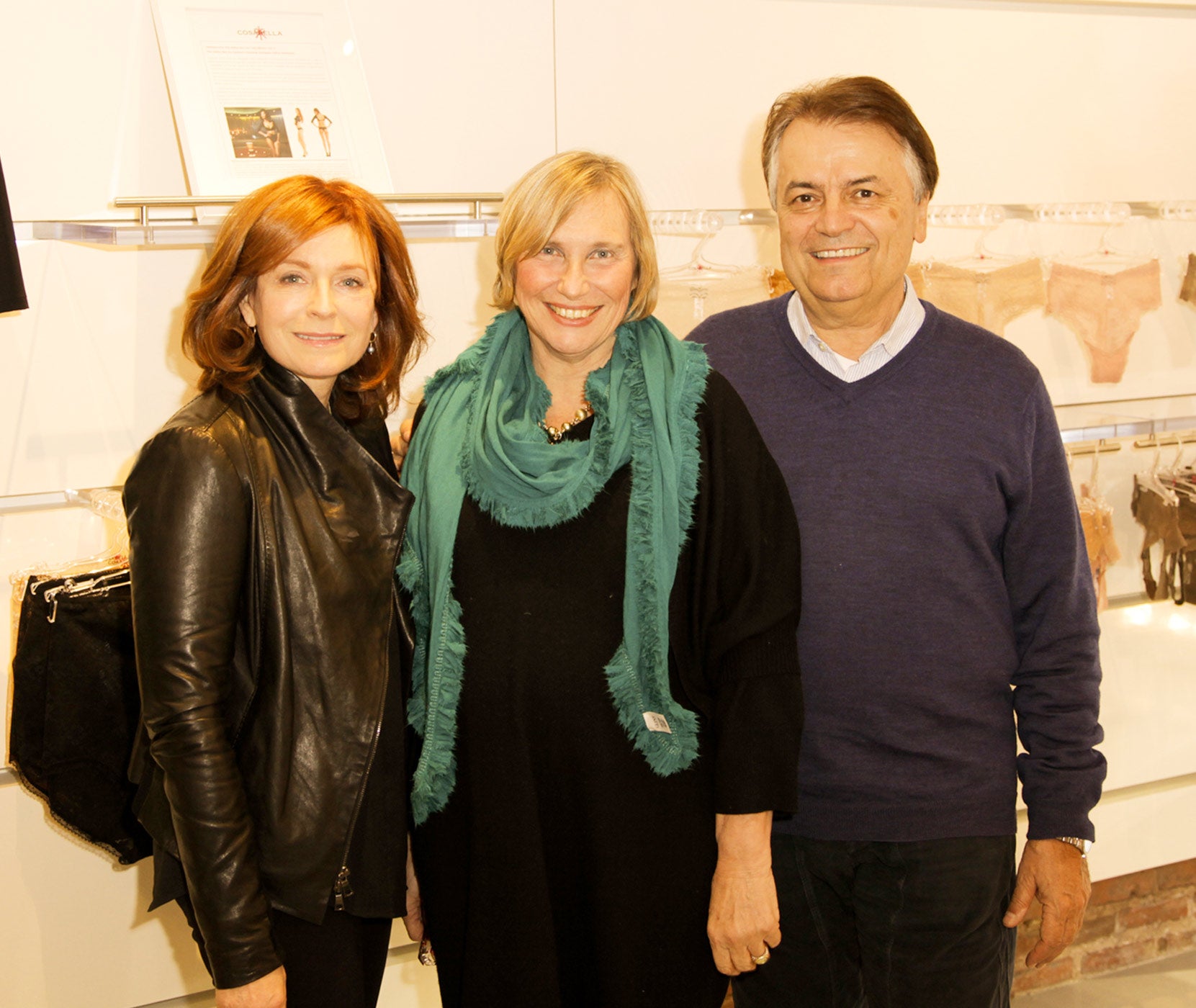 But not all of Guido's ideas take off. Four years ago, he bet wrong on the high-priced Cocoon collection of cashmere sleepwear. At the time, Cosabella was presenting its new seasonal collections to boutiques eight weeks after big department stores. Boutiques, with their smaller operating budgets, don't typically plan their merchandise as far ahead as larger stores. Guido thought boutiques would be interested in Cocoon, so he ordered a large quantity, but the high cost of the luxury items turned off many, leaving him with a lot of stock that he had no idea what to do with. Even today, he says, he has leftover Cocoon items lying around.

Now, he always creates a backup plan. He learned which items Cosabella's discount customers wanted and at which price points, so that he could offer special markdowns to move overstock products. "Before that, I would just get hammered if I was wrong," he says. He also put boutiques on the same schedule as big stores, so he knows what to expect in terms of initial sales for new products. To get boutiques to bite early on the seasonal collections, he pitches them mainly new versions of bestselling basic items, such as a new fabric or color for a popular bra-and-panty set. That way, boutiques are more confident in their ability to sell the items. Riskier products may be reserved for larger stores and Cosabella's own retail outlets.

"We challenged the calendar structure of normal buying cycles," Guido says. "We pushed it forward and have become much more successful in predicting what boutiques really need."

Cosabella's 30th-anniversary party in March was an opportunity for the Campellos to take stock of how far they had come. The flagship New York SoHo store was filled with guests drinking Champagne and eating prosciutto amid racks of colorful lingerie. On display was the fall 2013 collection as well as vintage pieces from the company's archives. Of her early days in Miami, Valeria says now, "I could have been sitting at home, enjoying the tropical weather for eight months, to then go home and be a miserable lawyer." Instead, she founded a company that now has a retail presence in major cities around the world.

In the past decade or so, she has even overcome her shyness, teaching herself to use Internet message boards and social media. It's a point of family pride and amusement that 62-year-old Valeria is always the first to adopt new customer outreach methods, from chat forums to Pinterest. She and Guido are the dreamers, Ugo says. In 2014, Guido plans to go one step beyond fluorescents: underwear that glows in the dark even without black lights.