Both business partnerships and marriages fail at alarming rates. There's no telling how combining the two will change the odds of either succeeding.

By Tor Constantino
May 11, 2017
Opinions expressed by Entrepreneur contributors are their own.

There are many articles and stories that use marriage as a metaphor for business partnerships.

It's a useful comparison since both types of relationships require work, commitment, collaboration, vision, sacrifice -- plus a bunch of other factors -- to be successful.

There's also a high correlation of failure between these two kinds of unions.

According to a study on the value of strategic partnerships from the CMO Council, as many as 65 percent of business alliances end in a separation. Similarly, recent research out of the University of Maryland estimates the average marriage has a nearly 53 percent divorce rate.

Neither of those numbers are particularly inspiring; however, both types of partnerships can work and they can even thrive when brought together.

Consider Rick and Chris Nickel, who have been married for nearly 16 years and have also been in business together for two years as co-owners of the Norfolk Growler Company, a manufacturer of premium handmade ceramic growlers.

If you're not exactly sure what a growler is or if you're not a fan of the craft beer culture check out this short video to get up to speed.

"It's been great," said Rick who's the creative visionary and ceramic artisan of the venture, "we've sold every unit we've ever created and demand continues to grow."

So much so that the start-up is scaling up production to triple its capacity and significantly increase retail distribution for its full line of products.

"Right now most of our sales come from online orders, attending large craft shows or from our walk-in studio where people can see us working and place orders there, but we are definitely growing and expanding our distribution," said Chris who's Rick's wife and is responsible for a range of responsibilities including: logistics, back office management, some production elements and order fulfillment.

What started as a hobby on a whim back in the spring of 2015 has grown into a profitable side business for the couple who also works fulltime at a Virginia-based university and share responsibilities raising their 6-year old son.

While there may be several reasons this pair has been able to beat the aforementioned odds regarding their business partnership, there were four not-so-obvious considerations that emerged during a recent conversation with the couple as to why they've been so successful. 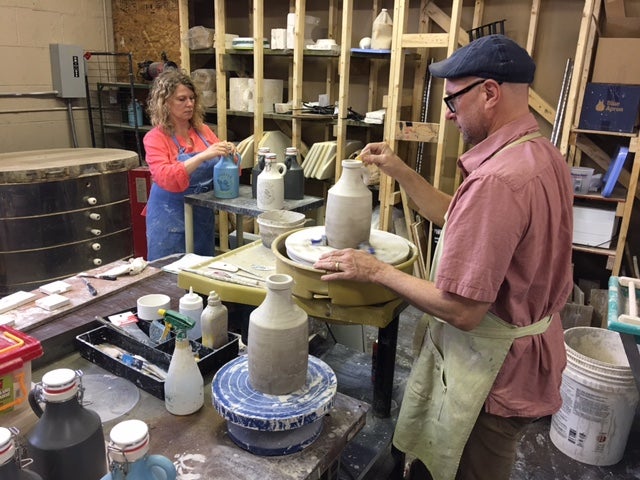 They both agreed that a critical element of their business success was that while they share a unified vision, they divide the duties to achieve that vision based on their respective abilities, which complement each other.

"Because we've been married so long, and we know each other so well, we have a deep understanding of each others' strengths and weaknesses. The things that we count on each other for are so seamless now in our life that those complementary skills and abilities have flowed into this business," Rick said.

Their mutual trust and familiarity over the years helped inform their decisions regarding division of labor.

Related: How to Keep the Marriage Strong When You Work Together

Another important consideration was the actual location of their business, which began out of their home and Rick's studio in their garage.

While having a home-based side business was initially convenient for the couple, who continue to have day jobs, they soon found foot-traffic and on-site visits from potential customers was an unforeseen issue.

"It was a bit intrusive having strangers walk up your driveway or walk right into the house if they saw a light on or if they saw we were home. Even though they were potential customers, it was still a bit disconcerting," said Chris. "Also, the studio space did not easily lend itself to discussions with other business partners or customers who wanted to sit down and conceptualize their own designs. Another thing was the fact that ceramic dust goes everywhere, which kept getting tracked into our home so we were spending more and more time cleaning than we wanted to."

They've since moved to a larger rented studio that solved those issues, which they both agreed they'd do from the start if they had to do it all over again.

They also agreed that another critical factor was being able to identify and manage potentially negative impacts of the business on their family as quickly as possible.

"We would bring our son, Ollie, to the ceramic studio for hours at a time. At first he had fun and we thought he enjoyed it. Then his teachers at school told us that he was having some issues that he didn't normally have. We talked to him about it and he said he didn't want to go to the studio anymore -- it wasn't fun for him. We had no idea at the time," said Rick.

So the couple has been intentional in their respective time spent together as a family, and they've also hired a part-time employee to enable further family flexibility.

Related: My Best Career Moves Were Getting Married and Staying Married

4. More business partners can be better.

One of the most counterintuitive insights they expressed was the benefit of having three additional business partners in the mix who have skills and experience to grow the business beyond Chris and Rick's expertise. The outside partners also play an instrumental role in decision making for the group.

"On occasion, Rick and I may disagree on how to handle a certain issue or aspect of the business. But having input from the other partners helps remove a lot of the emotion from decisions and makes that process easier," said Chris.

They both agree that navigating the ups-and-downs of business is more rewarding and fun when shared with someone you care for. "It's always a positive thing working with someone you love, trust and can count on -- it's never a negative," said Rick.