A company's holiday traditions should be more about mission-building than gift-giving or hall decking. Here's how you can use the holidays to build engagement with your team.

Jacksonville, Florida-based accounting software maker LessAccounting.com has 11 employees who live in six different time zones. While such virtual offices may be great for reducing overhead, they can wreak havoc on team unity.

"We have no water cooler. It is really easy to have a whole bunch of strangers who do not interact at all," says co-founder Allan Branch of his remote team.

The company's annual holiday party via Skype is designed to combat that. At a designated day and time, all 11 members of the six-year-old firm log on to Skype, armed with $20 of booze underwritten by the company. Then the team, eats, drinks and shops online together for each other's gifts, again with a $20 company budget. The twist? The gift recipient places his mic on mute, so he can't comment as his coworkers discuss what he might like as a holiday gift.

"It is fun to see people's reactions. It really encourages us to get to know each other and learn that one woman likes horror movies and other person smokes a pipe," Branch says. Plus, with a total tab of $440 he says it is "the world's cheapest Christmas party." 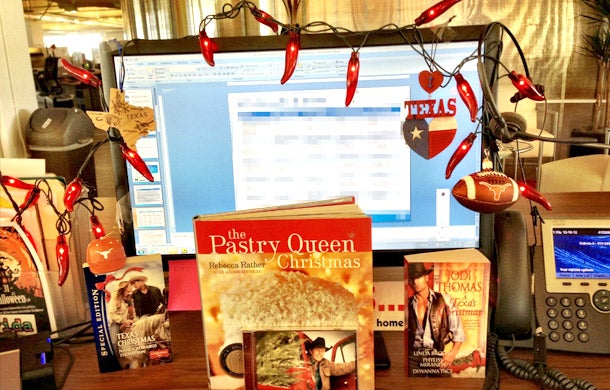 At North of Nine Communications, pranks are a holiday team building activity. Here an office elf has covered manager Allison Kubota's desk with a Texas-themed gifts and décor (she's from Texas).
Image credit: North of Nine

There are few things less jolly during the holidays than being forced into office celebrations that seem superfluous. But if you can create traditions that fit with company objectives, be it volunteering at a soup kitchen or a party with a dance floor, office holiday customs actually can make folks merry.

"Traditions are important rites of culture, so you have to think about them carefully," says Susan Strayer LaMotte, founder of exaqueo, a workforce consultancy. "There's this idea that we have to offer these perks, but you want to make sure your culture is in everything you do." 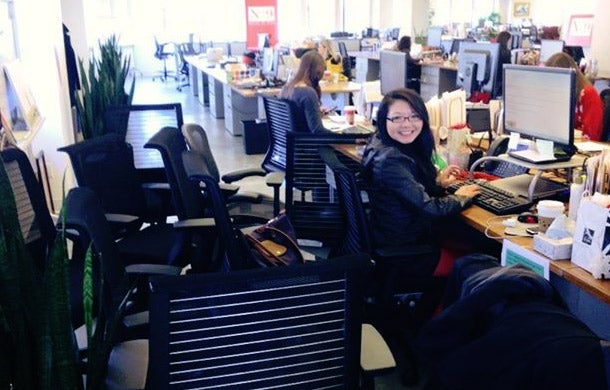 As a holiday prank, staffers from North of Nine Communications surrounded Connie Zheng's work area with chairs. Others haven't been so lucky: they've discovered their desk covered in festive holiday wrap.
Image credit: North of Nine

That means being mindful of religious observances and making people feel comfortable. "It's not about being politically correct, it's about fostering an environment where all employees feel like they belong," LaMotte says.

Still, you'll need to acknowledge your company's culture. A one-time holiday event won't transform it overnight. Also, LaMotte urges executives to pay attention to what their staff is telling them: "Traditions happen because of consistency, so the first year is really important. When introducing traditions, watch that first year to see how heavily they are adopted and how enthusiastic employees are about them."

To create a holiday observance that fits with your business goals, consider these other tips:
• Don't plan fun just one day out of 365. Yes, the holidays are special, but when your culture has easy, informal interactions throughout the year, you'll find more collaboration and enthusiasm for every office happy hour or planned excursion.
• Encourage your employees to help plan the tradition, be it a philanthropic day or a catered lunch. You'll get more buy-in if you have input from the beginning.
• Remember your regular work flow. If you're overextended from your annual holiday community service, you're not doing a service to yourself, your staff or your clients.
• Don't overdo it. Some office gift-giving traditions can quickly become costly and time-consuming. Suggest that gestures be free or low-cost (sending a funny electronic cards or video, or buying someone their favorite morning coffee) to keep stress levels low.

At North of Nine Communications in San Francisco, the traditional one-day gift exchange has morphed into week-long elf extravaganza they call the Secret Santa Stalkers. For the sixth year, these office elves will deliver pranks as well as legit gifts. One day an elf may leave a present on a desk at lunchtime…or rearrange the contents of papers in an in-box.

"It is good team bonding," says Emmi Buck, a client executive at the firm. "You have to coordinate 30 employees and even those in our remote offices are involved." At the end of the week everyone guesses who they think was their elf. So far, no rules have been necessary to assure that no one crosses a line from funny to frustrating. Still, experts say having such guidelines in place isn't a bad idea if your tradition is going to push the envelope.

Adds LaMotte: "Any time a new activity or office-wide outing occurs is a good time to remind employees of your values and policies. If you're actively seeking anonymous and individual feedback from your employees, they'll tell you when it's time to move on."

Fun is behind the holiday tradition at Bed Rest Concierge. Each employee at the Plano, Texas-based firm brings in what they believe is the worst fruitcake ever and the entire staff blind taste-tests the much-maligned seasonal dessert. The winner gets a full day off during the busy holiday season.

"This is a way to relieve holiday stress," explains chief executive officer Stephanie D. Johnson. "Even secret Santa can be stressful."

How does your company make the holidays special? Tell us in the comments.