Inside Breuckelen Distilling's Labor of Love

By Brian Patrick Eha
November 14, 2013
Opinions expressed by Entrepreneur contributors are their own.

Entering the light-filled space that houses Breuckelen Distilling, a small-batch producer of artisanal gin and American whiskey, you may find owner Brad Estabrooke taste testing Mason jars of alcohol. He does this to find the "heart" of the batch that has just been distilled, the middle portion that has the right balance of flavors. The spirit is tongue-scorchingly intense stuff: It has yet to be diluted and turned into the marketable liquor for which the distillery is known.

Estabrooke, 34, is a lean, intense man of average height. On the day Entrepreneur.com visits, he is wearing stained work jeans and a gray T-shirt advertising 77 Whiskey, one of his products. One of his employees, Osiris Martinez, 30, sits at a work bench nearby bottling whiskies and sealing them with wax. To do this, he dips the head of each bottle in a tub of hot black wax -- something like a fondue fountain -- and then places them on a rack to cool.

When Breuckelen Distilling sold its first bottles in July 2010, it became the first gin distillery in Brooklyn since Prohibition. Micro-distilleries have popped up around the country in the past several years, ever since new laws were passed making small operations economically viable, for instance by reducing the cost of getting a distiller's license. Estabrooke's entire operation employs five people, including its founder, and runs in a 2,500-square-foot space in the borough's Sunset Park neighborhood. The location once served as a boiler room. 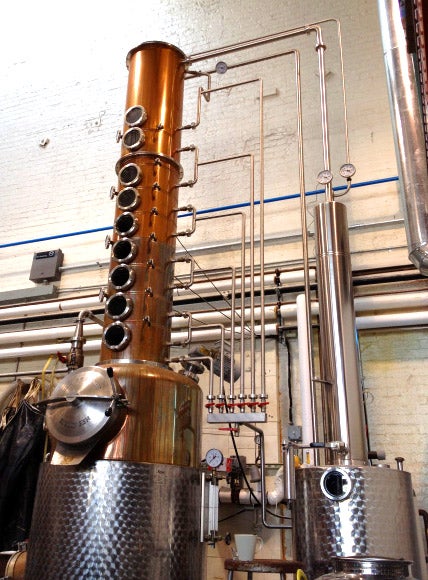 This copper device, which looks like something out of Charlie and the Chocolate Factory, was custom-built for Breukelen Distilling.
Image credit: Breuckelen Distilling

Like so many entrepreneurs these days, Estabrooke began his journey as a result of the recession. After eight years of being a bond trader, including a stint at Fidelity, he was laid off in December 2008. By then he had already decided to found a distillery. The layoff accelerated his plans.

He went to his friends and family for money. He managed to raise a six-figure amount -- he won't say exactly how much, but notes that it was only a third of what his original business plan called for. Still, he was grateful for the votes of confidence. "Some of them believed in the vision, but I think most of them just believed in me," he says of his investors.

Now his libations are available in 13 U.S. states and in Washington, D.C., and are also distributed in Europe and Australia. "We've sold as much gin in Europe this year as we have in the U.S.," Estabrooke says.

Related: 3 Steps to Transform Your Business Idea Into a Prototype

Breuckelen Distilling is part of a resurgence in manufacturing in a borough once known for its huge factories. But where Brooklyn's old-time manufacturers employed thousands of workers, most of the borough's producers today are small-scale, artisanal affairs.

Which is not to say their growth isn't impressive. Although Estabrooke originally thought his distillery would be the only one in Brooklyn, it now has plenty of company -- Kings County Distillery in Bushwick and New York Distilling Co. in the Brooklyn Navy Yard, among several others. 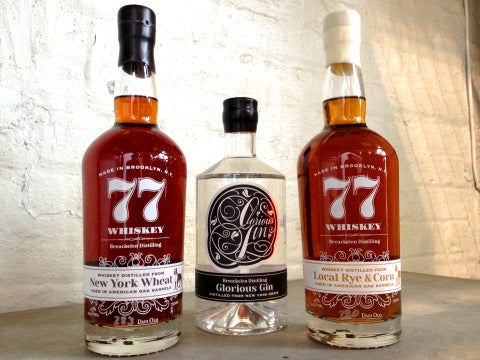 Among his fellow Brooklyn artisans, Estabrooke singles out for praise Rick and Michael Mast, two brothers who have been producing upscale chocolate bars in Williamsburg since 2007. He also tips his cap to Brooklyn Brine Co., a four-year-old manufacturer of specialty pickled vegetables, and to Gorilla Coffee, which operates a café in Park Slope and plans to open a 4,000-square-foot roasting facility and coffee bar in the Gowanus neighborhood this fall.

But Estabrooke has harsh words for 3D printing, a phenomenon often lumped together with businesses like his when describing Brooklyn's new wave of manufacturing. "That's a crock of shit," he says. "That's not manufacturing. That's designing." As he sees it, "five guys sitting around a 3D printer" is a world apart from the hard work of turning grains into spirits.

Spirit distillation is indeed a labor-intensive process, at least when you do it from scratch, as Breuckelen Distilling does. It begins with pallets of organic grain shipped from a farm upstate, whose contents are milled into flour. The flour is dumped into a mash tank, along with water and enzymes. The resulting mixture is heated, then cooled, combined with yeast and pumped into one of four 18-foot-high steel fermenters. Then a custom-built copper pot still receives the now-alcoholic liquid, known as the wash, and heats it to the point of evaporation. The alcohol steam passes through a condensation coil and re-condenses into a colorless spirit which is drained into Mason jars. This product can either be placed in oak barrels to age into whiskey, or re-distilled with botanicals to become gin.

Breuckelen Distilling sold about 1,500 cases of liquor in 2012, Estabrooke says. It is on track to sell 2,000 cases this year, and should turn a profit for the first time. (At Astor Wines and Spirits, a major retailer in New York City, the distillery's gin sells for $32 a bottle, while both whiskies sell for a little more than $40 a bottle.) So far, the distillery has stayed afloat with traditional loans and additional seed funding. He raised a second friends-and-family round shortly after opening.

Although money is a concern, Estabrooke is more focused on perfecting his craft. He enjoys discussing the many variables that influence a spirit's taste, including light, temperature and climate, even the type of soil in which the grain was grown. "At the end of the day, you have to surrender to what you have and where you are and to your ingredients," he says, regarding an oak barrel and its slowly aging contents. "This is going to be a New York whiskey."

Related: Can Consumers Bring Manufacturing Jobs Back to the U.S.?

ETF vs. Mutual Funds: What Are the Differences?