Sufferfest CEO Caitlin Landesberg left a comfortable job, took a risk, and it paid off. Here's how she did it and what she learned.

Sufferfest sounds like the name of a hardcore-punk festival, but it's actually a common euphemism for extreme fitness challenges, which is exactly why Caitlin Landesberg chose it for her upstart beer brand. The San Francisco-based marketing executive worked for companies including Strava and Mozilla before envisioning Sufferfest in 2015 as a relatively healthful and genuinely invigorating end-of-workout brew for avid runners and endurance addicts like herself. Think of it like Gatorade for grownups (ingredients in its line of pilsners, IPAs and even stouts include everything from bee polleen to black currant).

By 2016, she had launched the company in earnest, and in 2019, West Coast craft stalwart Sierra Nevada acquired Sufferfest for an undisclosed amount — the first such deal in its 40-year history to that point — and took over the nascent operation's production and distribution, helping it scale significantly. 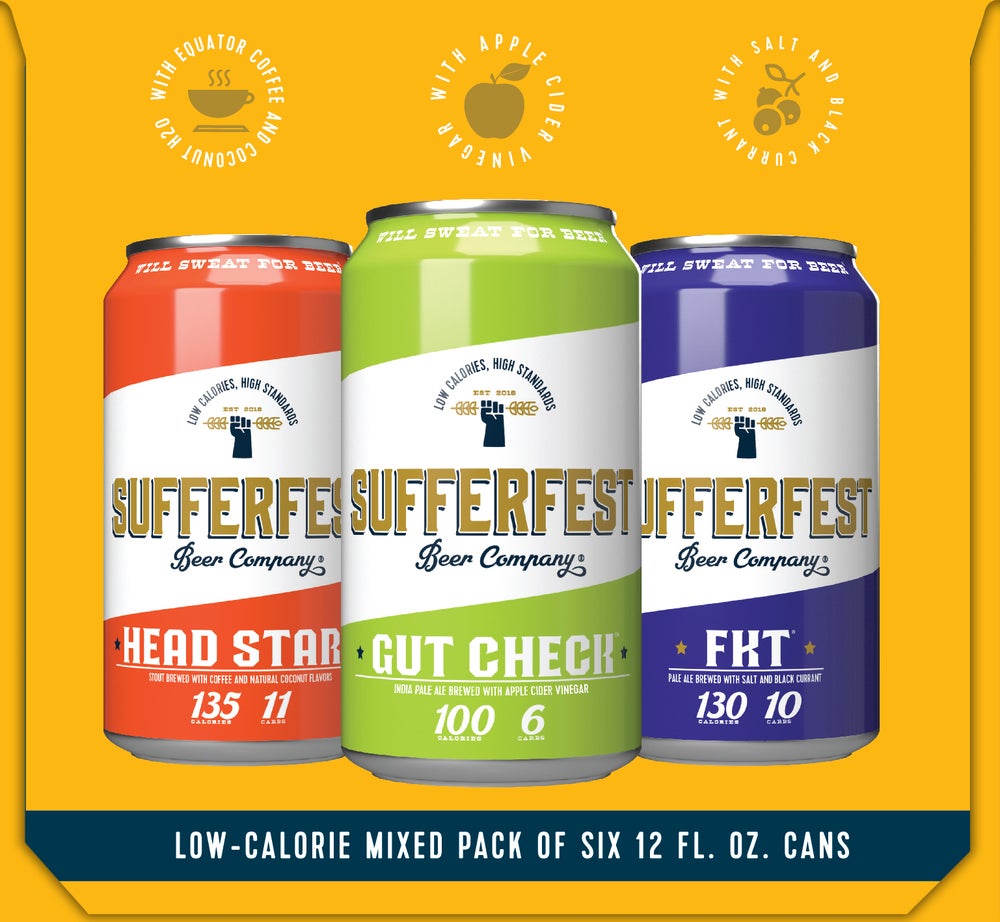 Landeserg remains hands-on in all areas of branding and marketing as CEO, and in a phone conversation earlier this month, she shared her thoughts on a woman's work, the obstacles to entrepreneurialism and the reward of being able to mentor other up-and-coming innovators like herself.

Related: Long Beach Beer Lab Could Have Closed; Instead, They Became Essential

"I was walking in [to stores] with my first beer samples that I created, labeled at home, with my leopard cooler, right after a run," Landesberg recalls. "And I would find whoever was responsible for purchasing beer or specialty items and do a two-minute pitch right there without their permission and make them drink it on the spot. I don't think they knew what do with me. [Laughs] And I didn't know etiquette, so I thought that was normal. I was sweaty, with my hair up, going, 'I'm going to bring a whole different audience to your store,' and we were batting a thousand. We had preorders that first week of business, and within two months, we had the whole Northern California Whole Foods region locked down and mandated."

Be the Outsider Breaking In

"I didn't belong, and I think that's exactly why we had succes," says Landesberg flatly. "I didn't ever identify myself as a beer drinker. It wasn't until at the end of every race and someone said, 'Drink this' that I actually became discerning. We didn't mean to disrupt, but we certainly were ourselves. As the business grew and I started hiring people, I didn't hire anyone from the beverage space. I was bootstrapping and hired the people around me who were going, 'Wow, this is a white space. I want to be a part of this.' And lo and behold, my team became cyclists and swimmers and people who were competitive and loved the thrill of a kill."

"I think we won because we were able to tell stories better than the other," Landesberg shares. "It became an exercise in letting someone know that this was the time and occasion perfect for the beer that we were designing specifically for them. It became a very word-of-mouth product, and that was driven by other athletes or coaches or influencers that people aspire to be like. I didn't mean to, but it was a page right out of the Strava playbook, and it translated perfectly to consumer packaged goods into a beverage category that we were defining in real time. I would say authenticity and real recognizing real led to being able to storytell better than the next."

Practice the Art of Timeboxing

"I was at a place in my life when I desperately needed some change, and I realized I was going to have to change my lifestyle and sacrifice things that I loved and needed in my life in order to make this work," Landesberg explains. "I was able to start a business because I didn't have a family. I didn't have financial responsibilities like I have today. I changed my living situation and stopped taking a paycheck. I sat down with my fiance [now husband], and we literally crunched the numbers of what we were going to give up and what we weren't going to do. And I was going to timebox a six-month project; I was going to give myself six months and this budget, and if I can't show traction, it's not failure, but nothing attempted nothing gained. So I sort of pieced it out into chunks that felt less nerve-wracking to me."

"I was at a very specific time in my life," Landesberg says of that six-month onset. "For people who might already have families and those types of responsibilities, for women in particular, the world isn't fair, and I don't think people are afforded the same privileges and exceptions and moments in time the way that I was at this moment in my life. Within those six months, I was lucky enough to have hit some milestones where we work, enough to support that proof of concept for me to do the scariest thing, which was ask my friends for money. And from an angel and a seed-investor perspective, because we were such early leaders defining that space, and I was working hard at it, I think those two things allowed for my first round of financing to come in as swiftly as it did. That laid the foundation for further growth and validation, where we brought in more credentialed money and backing. It's such an alignment of stars when it does work, and I do think you have to be in a particular place of mind to say: I can step away from this type of life or routine and cut back to put my nest egg into a business I believe in."

Related: These Beerpreneurs are Brewing a New Revolution

"There are these unspoken pressures and this balancing act women always need to uphold in a professional setting," says Landesberg. "We are the ones whose bodies are affected undergoing mass trauma, whose children respond to us and our bodily fluids for a huge period of time. And unfortunately, that weighs on people's perception of your ability to be present over time. It's so taboo to talk about, but it's a fact of life that women are more risky. And I don't think men are happy to say that or even feel that, but it's something that I have observed and felt. And so has my husband. I think he tries to combat that as much as he can in his business and in his world. But I don't think the same can go for men and women, and that's just the simple fact of life."

Look for a Co-Parent, Not a Partner

"We both really wanted what the other one had genuinely," Landesberg says of first meeting with Sierra Nevada CEO Jeff White. "Those conversations were so energized about the potential that it was quickly decided we were going to do something together. I had other conversations that were so numbers driven and focused on, 'Let's grow you as big as we can, as fast' versus, 'Let's build a lasting company, let's build loyalty, let's do something around quality and innovation.' I just sort of felt like this was the person I was supposed to meet right then and this was the home that Summerfest should have. As my first child, you know, I wanted to see it nurtured by the best parent possible. Jeff and I did look at it like a co-parenting relationship, and I really wanted to co-parent with him."

Go Forth and Mentor

"I was telling this business site that I would never touch entrepreneurship again," Landesberg chuckles. "The scar tissue is so immense. I just want to see my kids who I've completely foregoed for the last three years. But obviously, the world's changed, and we had a pandemic, and we're living through that now. I've so valued my time at home getting back into a routine and being with a family that's now grounded. I don't think I would want to ever go back to the way life worked. But knowing myself, it may in fact be in my DNA, because I am so itching to build again. I want to pay it forward to other founders and founding member teams, working with brands that I'm really passionate about. Ones that are women-led or B Corp or mission-driven really excite me — helping other founders grow from one phase to the next. I don't think I would ever be a full-fledged investor. I think I'm always going to be a builder. I just love the idea of creating something lasting and meaningful to my family, but that evolves with who I am as a person. That's really all I could ask right now."

A Delray Beach, Florida man scored a winning scratch-off ticket this week after he was cut off in line at a ticket machine.