What Small Businesses Can Learn from Goliath

By Peter S. Cohan
March 19, 2012
Opinions expressed by Entrepreneur contributors are their own. 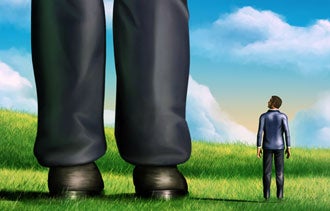 It's commonly assumed that all small businesses are clever and agile and all big ones are slow, plodding and unable to adapt to change. But neither of those commonly held beliefs are true.

Let's consider the big-business exceptions. The following discussion includes case studies from Procter & Gamble, Intuit and Google, as well as lessons for small businesses in need of a jolt of creativity.

P&G launched an employee-driven design consulting unit in 2004 called Clay Street, which the consumer-products giant used to help turnaround a shrinking brand. That year, Clay Street -- using a revolving cast of employees from all over the company, including interns -- helped revive a then-tired brand of shampoo, Herbal Essences. The cross-functional team that spent 10 to 12 weeks at Clay Street came up with ideas that almost doubled Herbal Essences' sales growth relative to a year earlier.

The team discovered a different idea of what the word "organic" means for today's consumer, versus the meaning it held for older generations. When asked to shop for items they considered organic, the P&G team selected "below the ground" products like herbal tea, health food and granola. By contrast, the Gen Y consumer's theme was "all possibilities" -- including items such as smoothies and brightly colored blouses. As a result, the company rehabbed the product's branding.

Lesson: Take all opinions into consideration. Asking employees to chip in on projects and lend their ideas can help fuel innovation.

Meanwhile, TurboTax-maker Intuit is creating what it calls a culture of "frugal experimentation," which among other things spawned the idea for offering debit cards to people without bank accounts. An Intuit finance employee -- not a "product person" -- noticed that the people who need tax refund checks the most are often ones who don't have bank accounts.

She suggested routing people's tax refunds to debit cards provided by the company. With just a rudimentary website, which Intuit founder Scott Cook wasn't initially keen on, the employee was able to test her idea. She expected 100 takers but got 1,000. Surprisingly, half of those beta testers did in fact have bank accounts -- meaning that the market need was much greater than Intuit expected.

Lesson: Let go of the reins sometimes. Even though Cook had reservations about the project -- he let his employee go for it.

Then, of course, there's Google. The search giant is well known for letting workers spend 20 percent of their time brainstorming -- dreaming up products or services that interest them. This massive decentralization of innovation -- called Time Off -- helps keep Google ahead of competitors like Yahoo and Microsoft.

An example of how this strategy has paid off: In 2005, Yahoo started the Panama initiative, a project designed to catch up with Google's advertising system, AdWords. Though the initiative involved 300 people over 20 months, Google has maintained roughly 60 percent lead over Yahoo in the search-engine marketing realm thanks in large part to Google employees who've used their Time Off to help strengthen the company's ad prowess.

Lesson: Let your employees dream. In addition to advertising model improvements, Google's employees have come up with countless innovations from gmail to Orkut, which is a social networking site that's really popular outside the U.S.

How has your company benefited from employee contributions? Leave a comment and let us know.