The Sharks are all successful entrepreneurs, providing valuable insight and feedback to the contestants that enter the tank each week. Their advice applies to you as well.

ABC's hit television show, Shark Tank, has become one of the network's most popular and successful series, with last year's Jan. 24 episode drawing in 8.2 million viewers. It has introduced entrepreneurship to a much wider audience and undoubtedly encouraged several people to pursue their dreams. It was one of the shows that first inspired me to start my own business -- and hopefully it can for you, too.

The Sharks are all successful entrepreneurs, providing valuable insight and feedback to the contestants that enter the tank each week. Even if you aren't pitching the Sharks yourself, you can still pick up excellent business advice. Here are nine quotes from the Sharks to help you reach your goals.

1. A goal without a timeline is just a dream. -- Robert Herjavec

Every entrepreneur has a goal, but it is the plan to reach that goal that separates the successful ones from the millions that fail. If you watch Shark Tank, you will notice that some of the pitches sound good until the contestant is asked how long they have been working on their idea.

Some will be several years into it without gaining any traction. It doesn't necessarily mean that the idea is bad -- it just means they have never put together a timeline for hitting their goals. Set goals with a specific timeframe to reach them. This holds you accountable and keeps you focused and on track. 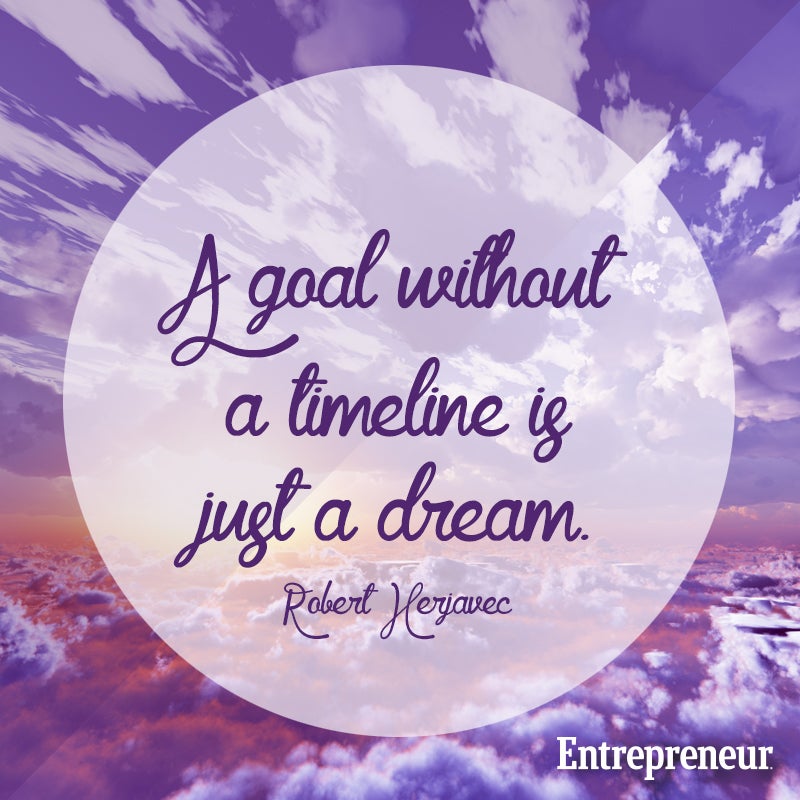 2. It comes down to finding something you love to do and then just trying to be great at it. -- Mark Cuban

You have to absolutely love what you are doing, first and foremost, because if you don't you are going to be completely miserable. Being an entrepreneur and starting a business will command the majority of your time -- you have to be prepared to eat, sleep and breathe your business.

If it isn't something you love to do, it will be very hard to put in the dedication and work required to make it successful. When you create a business around a true passion you will naturally want to make it better.

You have to focus on what is working in your business when it comes to growth. Every entrepreneur dreams of rapid expansion and growing his or her business into something bigger. However, simply expanding for the sake of expansion can be a death sentence for your business.

If your sales and customer demand warrant growth, then go for it. Even though you might want to expand you always have to turn to the revenue and determine whether it is a good time to pursue that growth. 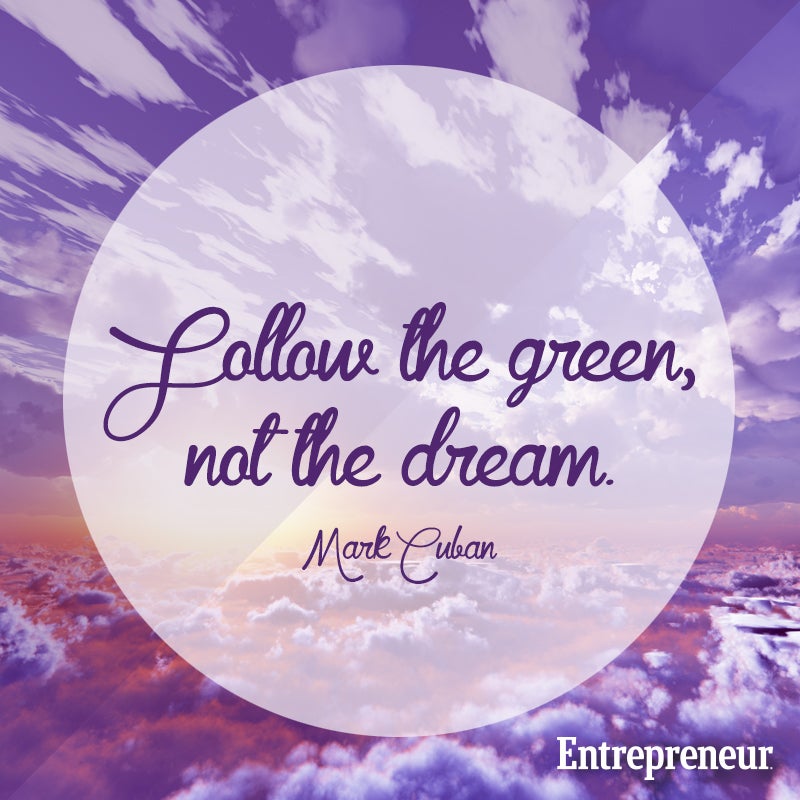 4. Nobody has a monopoly on good ideas. -- Kevin O'Leary

Kevin O'Leary will often mention "creating a better mousetrap" on the show. If something already exists but you feel you have a better solution then go for it. Look at the app WhatsApp. There were several text-messaging apps available but WhatsApp founder Jan Koum felt he had a better mousetrap.

The entrepreneur that was once on food stamps sold the company to Facebook for $19 billion -- something that wouldn't have happened if he never pursued his idea because he felt there were already messaging apps available.

5. All you need is a laptop or a PC and an Internet connection and you can pretty much do almost anything and create almost any type of company. -- Mark Cuban

The Internet has created an endless amount of possibilities for entrepreneurs. My company helps people who are selling websites in a wide range of industries and niches. We constantly come into contact with entrepreneurs that have started businesses based on individual needs, wants and passions.

The Internet allows entrepreneurs to start small, eliminating a lot of overhead in the beginning, and work from virtually anywhere in the world. This flexibility and convenience gives entrepreneurs the chance to pursuer their dreams that wouldn't have had the opportunity in the pre-online era.

6. As an entrepreneur, you can always find a solution if you try hard enough. -- Lori Greiner

There are going to be times that you hit brick walls and are faced with challenges that at first glance seem nearly impossible to overcome. I was presented with several challenges when starting my business and I was forced to work hard in order to develop solutions to navigate around every challenge presented to me.

The hard work will never disappear -- there will always be challenges in business, so get used to becoming a great problem solver in the beginning. You will learn that you can overcome any obstacle if you try hard enough. 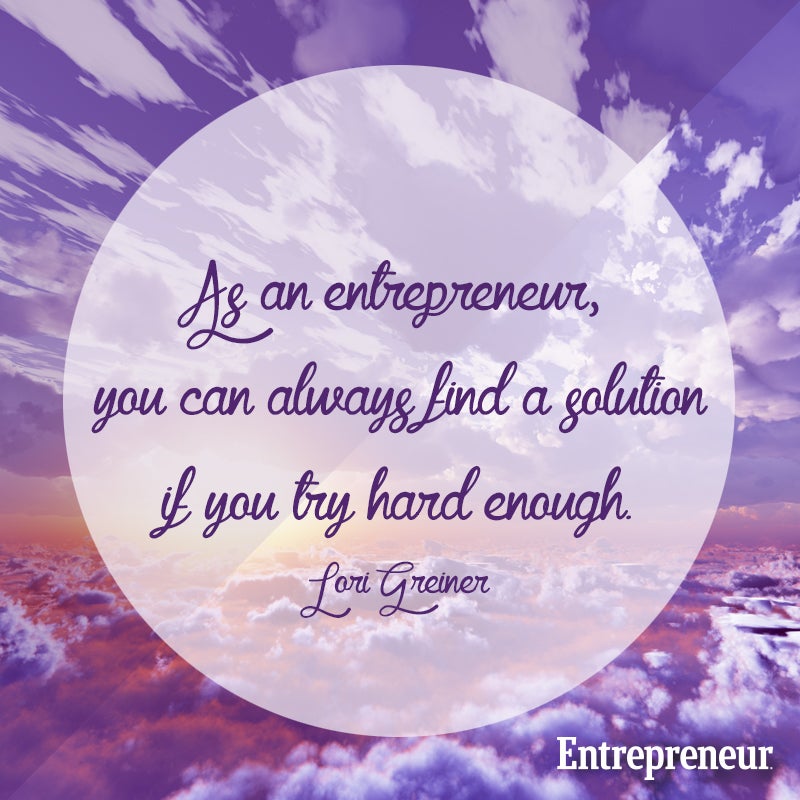 7. Make sure you pick good people to build your business with, as they'll determine 80 percent of your success. -- Barbara Corcoran

Assembling the best team is vital to the success of your business. Whether we are talking about co-founders or employees -- the right people will propel you towards success and the wrong people will sink your business.

Make sure that anyone you are considering bringing on, in any capacity, both fully understands and shares your vision. If not you have a recipe for disaster. Also, if you do end up making a hiring mistake don't be afraid to make a change. The longer you hang on to a toxic employee the more damage it will cause.

8. Everyone has an idea, but it's taking those first steps toward turning that idea into a reality that are always the toughest. -- Daymond John

Think of how many times you have heard someone say, "I had that idea years ago," when reacting to something new that hits the market. People have amazing new ideas daily, but the only way to make them a reality is to take action.

Becoming an entrepreneur has a lot of risks in the beginning -- something not everyone is willing to take. The first steps, including the decision to move forward, are what separate successful entrepreneurs from the millions that just have great ideas.

9. The road to riches is never straight and narrow. It can be riddled with financial land mines. -- Kevin O'Leary

When I started my business, I bootstrapped its entire growth, but not all entrepreneurs take the same path. While bootstrapping can be a longer journey to the finish line it eliminates the added stress of taking on debt. Some entrepreneurs think that success will come sooner if they accelerate their growth by taking on debt to make some things happen sooner.

It's never as simple as racking up debt and then paying it back when you hit the entrepreneur lottery. Blindly taking on debt without multiple plans to repay it can create a huge mess that can cause your business and dreams to implode. 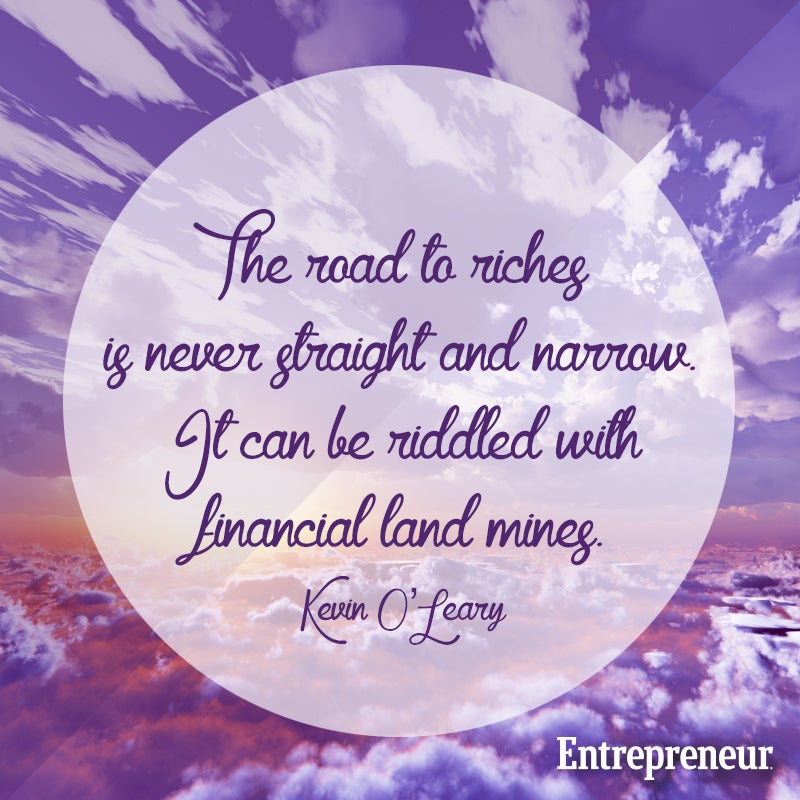 What are some of your favorite motivational quotes from the Sharks? Share them in the comments below.