By Sharon Wienbar
February 13, 2014
Opinions expressed by Entrepreneur contributors are their own.

Compensation is a mysterious process at many startups. Once an organization has scaled beyond a few people, some form of hierarchy is established -- even if the org chart is flat, someone (or some people) decide who gets paid what.

Fortunately, the web has brought more transparency to the process. For instance, Startup Compass posts some data for founders' pay, but that data aggregates founders across all positions, levels and regions. Also Payscale lets individuals benchmark specific positions and locations.

But for those entrepreneurs running venture-backed companies that need a little more light shed on the subject, read on.

Related: 4 Reasons You Should Let Your Team Set its Salaries

Usually a compensation committee will include the largest investor board member, another investor and an outside director, who is an experienced operating executive. The logic is that the largest shareholder is most keenly sensitive to use of capital and dilution. The operating executive is experienced building, retaining and motivating teams and is sensitive to asking management for extraneous detail.

Determining pay
So how does that committee operate behind the curtain to set pay for executives? The magic is in balancing objective data from outside "market comparables" and the specific company and individual situations. As companies progress toward an IPO, compensation becomes more formulaic, though the eye-popping pay of public company CEOs show the formulas can definitely slant in management's favor.

Big companies hire consultants to come up with specific pay data from "comparable" public companies' proxy statements. Private companies have to rely on private data sources. One of the best is the Venture Capital Executive Compensation Survey published by Advanced-HR. The data isn't publicly available but sponsoring VC firms, such as mine, can share the information with their portfolio companies.

Related: Figuring Out How to Divvy Up Startup Equity

The blog post from Startup Compass I mentioned earlier provides average data for founders, regardless of position, but pay for executives vs. individual contributors, or even for various executive positions, varies widely. An important data point that Startup Compass did not address is that founders make much more compensation in equity than similar executives who come later. (see example below)

As the above chart shows, founders make roughly 75 percent of the cash compensation as hired-in executives in these jobs but enjoy a larger multiple of ownership share.

The data above also show that more senior executives (i.e. the CEO) have more leverage in their compensation, meaning their total target pay is bonus- or incentive-based. Their pay number is bigger, but they only earn it if the company hits its objectives for the year.

Figuring out bonuses
VCs and other directors want to reward performance because that means the stock is likely increasing in value. So bonus plans also have leverage -- the more a company performs, the higher the pay increases (disproportionately in some cases). Similarly, missing key objectives doesn't just result in the same percentage hit to the bonus, it might mean no bonus at all. The table below shows a simplified form of a typical scaling startup annual bonus plan.

Related: How Can I Keep an Employee I Cannot Afford to Pay? 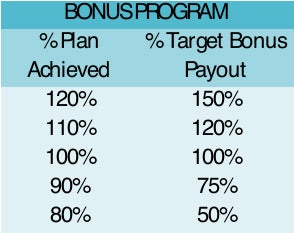 At earlier stages, bonuses might also be given for shipping a new product or securing new customers. In those early years, plans are fluid and keeping people motivated and feeling successful is an intangible goal of the compensation plan. But as the company matures, not only is the bar higher but the margin for missing it is much tighter. In the table above, hitting 80 percent of a $5 million goal in a company's second year is a good result, but hitting 80 percent of a $100 million plan in its seventh year is a huge miss and probably shouldn't be rewarded at all.

Related: Salary Review Season Is Coming. Who's Getting a Raise?