Get ready for the trough of disillusionment.

Remember how, back in the early 1990s, virtual reality was about to explode onto the scene, transforming everything from the way we taught our kids to the way we consumed media?

Or what about gamification? Just a few years ago, the buzzword was offered up as the solution to everything from disengaged employees to America's obesity problem.

Both emerging technologies had their time in the sun, but the lofty predictions have failed to materialize. Despite Facebook's recent $2 billion purchase of Oculus, virtual reality has yet to reach the mainstream. Meanwhile, gamification's impact has been minor; use the word now, and it's likely to arouse immediate skepticism from investors.

This phenomenon – frenzied speculation and outsized expectations, followed by a far less impressive reality and gradual resurgence to a level of practical adoption – happens frequently enough that research and technology firm Gartner releases an annual chart plotting where emerging technologies fall on its five-stage 'hype cycle' (technology trigger, peak of inflated expectations, trough of disillusionment, slope of enlightenment, and finally plateau of productivity). 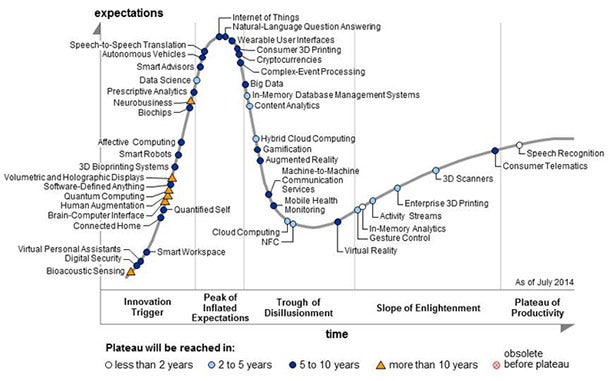 Since Google's $3.2 billion acquisition of the creator of the Nest smart thermostat in January, the term "the Internet of Things" (IoT) has entered the popular consciousness. Companies have been quick to cash in on the buzz, advertising a range of 'smart' items from cars, to tennis racquets, to alarms, to refrigerators, to entire homes, which all promise to maximize convenience and productivity by connecting disparate areas of our lives.

In August, Gartner released its 2014 Hype Cycle report, which placed the Internet of Things at the zenith of the "peak of inflated expectations."

If Gartner is right, we're in an IoT bubble and our expectations are about to be deflated.

A VC weighs in.

Craig Hanson is a general partner at the venture capital firm Next World Capital. When examining investment opportunities, he always asks himself one key question: "Is this something that creates a new product category, or is it simply a feature added to an already existing product?"

Related: Nest Opens Its Software Platform to Developers in Bid to Conquer the Connected Home

If a company is merely creating a feature that improves an existing product, that's a problem; existing product manufacturers can easily incorporate the feature themselves. The real innovation and return-on-investment, he finds, comes from companies creating new product categories.

That's why he's not buying into the hype surrounding the IoT. Besides wearables, "which didn't exist before," he's hard pressed to identify a new product category that has been created from the craze. Take the 'smart' refrigerator. While its applications are impressive – the ability to communicate via text with the appliance from the grocery store in order to determine whether or not you need milk is ingenious – a 'smart' refrigerator is ultimately just a refrigerator with an Internet connection. Same thing goes for other 'smart' household items, and Hanson predicts that existing appliance manufacturers such as GE and LG will simply add Internet connectivity to their range of products. (In fact, both companies have already launched a line of 'smart' appliances).

Internet capabilities for appliances and other daily use items "may be an interesting next step, but it doesn't create the opportunity for new companies to emerge," Hanson says. "As a venture capitalist or as an entrepreneur, you need to look for a new market space."

He believes that the concept of an 'IoT company' will follow a similar trajectory as the concept of the 'Internet company.' Just as most companies are now, by default, 'Internet companies, we'll eventually assume that all products are 'smart.' "Within five years, we won't be talking about it," Hanson says. "It will be like saying my smartphone can surf the web."

And as with 'Internet companies,' the startups that will survive the IoT hype cycle are the ones with a narrow focus that either a) create a new product category that addresses a specific function made possible by the IoT (as Google did with the Internet and search) or b) build a software system that can optimize functionality on top of an existing product category (as Amazon did with the Internet and shopping).

Hanson hasn't seen many of these promising startups yet. But he predicts that as the buzz fades, they will begin to emerge from the woodwork, representing just "a small percentage of what's talked about when we bring up the Internet of Things today."