The father behind one of the most famous viral videos in the world has been tapped to curate religious-oriented content for a brand new Christian social media website.

"Is this real life?"

When 7-year-old David DeVore slurred those four preternaturally profound words after a dental procedure in 2009, his dad, whose name is also David, happened to capture the anesthesia-fueled ruminations on film.

Shortly thereafter, a viral sensation was born. And while viewers were tickled -- 123.4 million of them on YouTube (and counting) to be exact -- the man behind the lens saw the success of the video as a blessing from God.

Now, DeVore's latest venture aims to re-hone the happenstance opportunities afforded by his brush with viral fame for a greater good. As director of the new content-sharing site ChristianLife.com, DeVore will curate videos, images, memes and more -- all with a faithful bent and uplifting overtone.

Related: Why Faith Belongs in Your Workplace

"While shareability has become a recent phenomenon through social media," DeVore explained, "Christ was really the first example of that in the way that he sought to spread the gospel while he was here on earth." 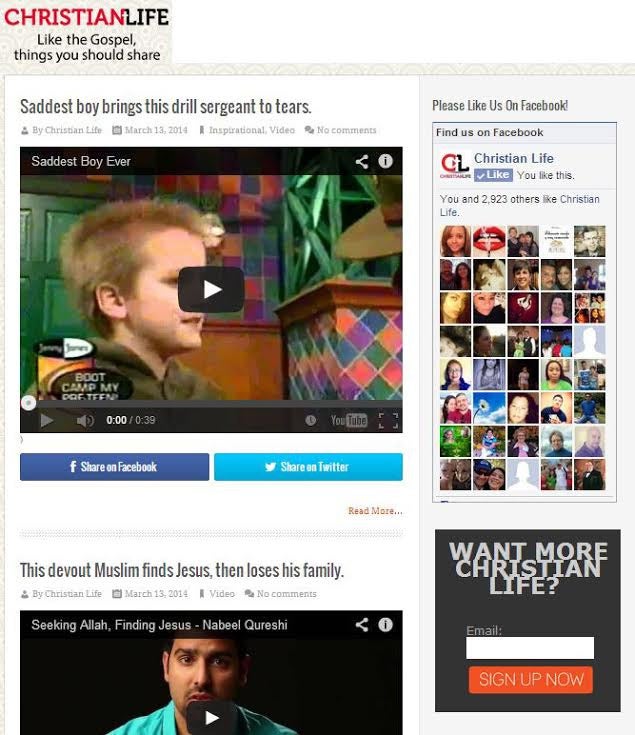 A screenshot of the site.
Image credit: ChristianLife.com

Content will run the gamut from the inspirational to the inane -- humor, DeVore noted, being something that is notably referenced in the bible. But a recent video of a formerly devout Muslim man tearfully recounting his conversion to Christianity "cuts to the heart of what we're ultimately looking for," DeVore said.

ChristianLife.com is a subsidiary of Charisma Media, a Florida-based Pentecostal publisher of books and magazines. DeVore is a longtime friend of the company's founder and CEO, Steve Strang, who asked him to come onboard earlier this year.

Though this marks the first time that DeVore has spoken about his family's faith on a greater scale, "it's always just been who we are. When David says, "Is this real life?' in the video, we hope that people turn to God for an answer to that question."

Following the success of the video in 2009, DeVore -- a former real estate agent -- said that his family was able to subsist almost entirely on revenues generated by Google's AdSense program.

In light of the 2009 housing bubble, DeVore also attempted to sell David After Dentist-themed merchandise, though sales quickly abated. He also licensed out the footage for use in commercials -- by Vizio for its Super Bowl spot, for instance, and many others.

"David loved it," DeVore said. "He gave it an A plus…though at times he felt like Joseph may have been exaggerating just a little bit."