Fusing classical music with pop hits, The Piano Guys have risen to fame for viral videos filmed amidst eye-popping scenery.

Perched high atop the Great Wall of China, decked out in black-and-white Karate uniforms, two middle-aged dads from Utah -- one on piano, one on cello -- are jamming out to a musical mashup of Chopin and a cut from the Kung Fu Panda soundtrack.

Banging their instruments blissfully as an ethereal fog descends around them, the performance, which is part hokey, part magical, has been viewed on YouTube more than 10 million times.

And it's just one of many stunning stagings to be found on the channel of YouTube supergroup The Piano Guys -- four Mormon dads from Utah who quit their day jobs three years ago in pursuit of an online career that has already netted them millions.

The group, which consists of a pianist, cellist, videographer and music producer, initially rose to fame for catchy covers filmed amidst eye-popping scenery: underneath the Christ the Redeemer statue in Brazil, for instance, or parked beside a few Batmobiles.

But on an icy evening earlier this month in midtown Manhattan, the group was set to debut in one of the unlikeliest venues of all: onstage at Carnegie Hall. 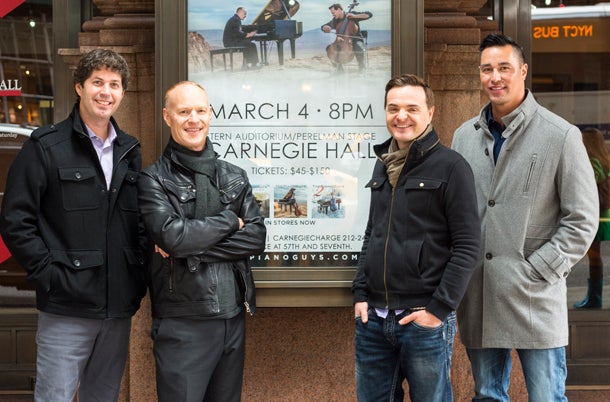 "Growing up classical, Carnegie was sort of like the floating cloud that it seemed like you could never get to," says cellist Steven Sharp Nelson, a former real-estate developer, who was pulsating with nerves backstage before the show. Appearing at the same venue as Tchaikovsky, Maria Callas and Bob Dylan, he adds, is an irrefutable validation of YouTube's star-making powers.

Before it was ever a musical quartet, The Piano Guys was the name of a piano store in St. George, Utah. As part of a social-media marketing strategy, the shop's owner, Paul Anderson, asked Nelson and a local pianist named Jon Schmidt to perform in video clips he could post to the store's YouTube and Facebook pages.

"In no time," goes a joke Nelson tells onstage, "the four of us had 54 videos up on YouTube, 600 million video views, four albums with Sony and 3.7 million YouTube subscribers -- and we still hadn't sold a single piano."

The shop shuttered in March 2012 -- the same year the guys inked a highly unconventional record deal with Sony. As opposed to being paid in royalties, the guys share profits with the label as partners, while continuing to finance all of their own music and marketing. Their fifth album is a live recording of the Carnegie Hall show to be released later this year.

As audiences have grown, so has the scope of the video productions. Anderson, who serves as the group's video visionary, has now set out to film in front of each of the Seven Wonders of the World. With the Great Wall and Redeemer statue (below) completed, he currently has his sights set on Chichen Itza and the Colosseum.

"Taking classical instruments outside of the context of a concert hall and putting them up on a 1,000-foot cliff or on a moving train or on a beach -- that really fuels the shareability factor on YouTube," he says.

Still, the group has always sought to keep crews and production budgets tight. The videos often cost less than $5,000 to film, with sets, helicopters, cameras and other equipment donated by friends, colleagues and supporters.

For fans, the soaring visuals have become as transporting as the songs themselves. Improbable mashups like Bach and Bruno Mars or Vivaldi and Let It Go appeal to wide swaths, says the group's music producer, Al Van Der Beek. And as self-described classical music geeks, the guys often turn to their children -- there are a total of 16 among them -- for insight into today's pop music scene.

"What we've really been able to tap into is music that the entire family can enjoy," Van Der Beek says.

Given the power of social media and the universality of the compositions, the group has cultivated an international following, with sold out shows in England, Germany, Hungary, Japan, Russia and beyond. Next, they say, they're eyeing gigs at the Sydney Opera House in Australia and London's Royal Albert Hall. 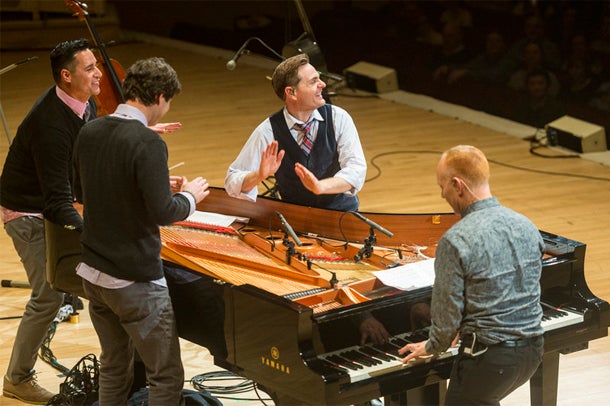 All four guys take the stage for an encore performance of One Direction's 'What Makes You Beautiful.'
Image credit: C. Taylor Crothers

Onstage, they are captivating to behold. Nelson will thud the belly of his cello like a drum, as Schmidt removes a shoe to play the piano with his toes. Each number seems to swell into a glittery, feel-good anthem.

For all its theatrics, however, there is also a deeply sentimental aspect to the spectacle, including a video interlude of the guys performing at a nursing home, and songs tearfully dedicated to their parents, wives, children and God. This is the power of YouTube: to fuse homespun talents with an uncanny intimacy.

And touching the lives of their fans on a personal level, the guys say, is their ultimate goal. "Artists tend to get jaded when they do too much touring," explains Nelson. "If we could focus on the worth of a soul, that never gets old."