With $28 Million in New Funding, Porch Is the 1-Year-Old Startup Looking to Remodel the Home Improvement Market

In addition to a large Series A, the company reported an exponential increase in employee headcount and several new site features.

After going live exactly one year ago today, the Seattle-headquartered site said its Series A round, which closed earlier this year, brings total funding to $33 million. The round is bigger than Series A investments in startup luminaries such as Pinterest ($10 million), Uber ($11 million), Facebook ($12.7 million) and Snapchat ($12.5 million).

At the same time, the company announced exponential employee growth from 25 to more than 200 in just one year's time.

Another high point has been an ongoing partnership with home improvement retailer Lowe's, which also led Porch's latest funding round, said CEO Matt Ehrlichman. Within each of Lowe's 1,717 stores across the country, Porch bolsters sales by enabling associates to suggest contractors who can eventually install items that are purchased in-store. That deal was inked in May.

But now, Porch is ready for its next chapter, says Ehrlichman, who founded the company as he struggled to find contractors during his family's own home construction process.

Beyond merely acting as a go-between for service jobs of every stripe -- from cleaning to landscaping to roof replacement to plumbing -- Porch's other primary asset is an enormous database of renovation information called the Porch Home & Neighborhood Report, which includes details on 120 million projects that have been completed by a total of 1.5 million professionals across the country. (Depending on one's definition of a "home,' Ehrlichman says, there are anywhere between 90 to 120 million total homes in the United States.)

All of this information -- compiled by Porch for the very first time, says Ehrlichman -- is free to homeowners, allowing them to view cost information and photos of past projects, as well as other vital neighborhood stats in the case that they're eyeing a purchase or sale.

"With almost every other industry in the world at this point, as a buyer, you can go and do research online, become informed and get the answers that you need," Ehrlichman says. "The home is really the one space out there where that's just not true." 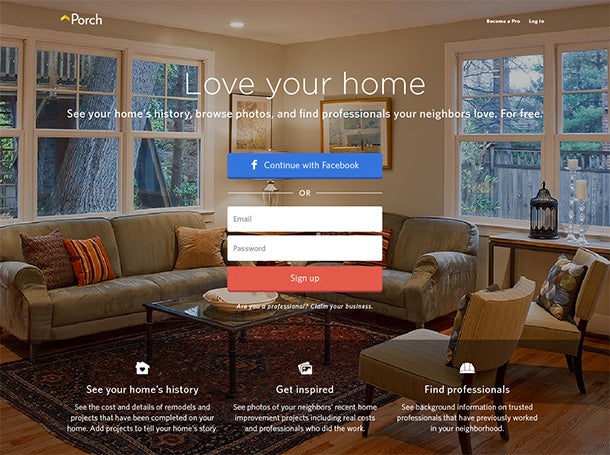 To this end, Porch is launching several new services today to deepen its trove of project data and empower homeowners across the country. For the first time, consumers can now add their own projects to the existing database -- whereas previously this information had only been managed by Porch.

The company is also rolling out more finely-honed search features, so that users can browse by project cost as well as among a broader array of homes nationwide.

Porch is also ramping up the reputability of its contractor network. Effective immediately, the site will indicate which professionals have been licensed to practice in their respective states, so that consumers can immediately weigh factors like training and accreditation, Ehrlichman says.

By this same token -- given its extensive data on what projects have been completed and when -- Porch will also begin to verify reviews in order to prevent "gaming," the company said.

Related: Freelance Site Fiverr Raises $30 Million in a Play to Become the 'Amazon of Marketplace Services'

While Ehrlichman declined to comment on Porch's revenues, he said that the company makes money by charging contractors for premium status. Starting at a monthly rate of $50, this buys exposure across the site as well as click data -- though search results, Ehrlichman ensures, will remain pure. Only four premium status slots are available for each service category per zip code, he added, in order to maximize the value Porch can provide to each premium contractor.

But at the end of the day, Ehrlichman says, beyond project facilitation, the company's ultimate goal is to help consumers forge more meaningful connections with their homes.

"I have such fond memories of my childhood home," he says. "And when you're not dealing with all the pain and the maintenance and the headaches, it's an amazing emotional connection. We're trying to make home improvement and home ownership and that whole home story delightful."

Related: After Many Strikeouts, a $44 Million Home Run