8 Things You Should Know About Chef's Cut, the Company Founded by 2 Golf Caddies That's Now a Multi-million-Dollar Jerky Brand

The business's meat products are sold in close to 40,000 stores.

The golf course is where many people go to relax or maybe occasionally talk business, but for Dennis Riedel and Blair Swiler, it's where their business, Chef's Cut, was born and raised.

Swiler had been working as a chef, but changed jobs to caddy in Naples, Fla. He had been making jerky at home, and took it to the course. Once Riedel tasted it, he wanted to turn it into a business.

"In the golf world you're always around a lot of successful entrepreneurs," Riedel said. "I always wanted to get out on my own and do my own thing. I think to go from being a caddy to launching your own businesses is a unique path to follow. It's what drove me and inspired me to get this business off the ground and get it going."

Now the brand sells beef, chicken and pork jerky, meat sticks and snack packs in 40,000 U.S. stores, including Kroger, Costco, Safeway and 7-Eleven. Its high-profile investors include actress Olivia Munn and NFL superstar Von Miller. Five years after Chef's Cut launched, it broke seven figures in 2014, according to the company. It finished last year with more than $47.5 million in revenues.

Here are eight things you should know about Chef's Cut's journey.

1. The chef of Chef's Cut was reluctant to start a business.

Swiler, who quit his job as a chef after he said the long hours and stress caused him to gain weight and smoke too much, was skeptical that his jerky hobby could be anything more.

"It took me about two years of nagging him," Riedel said. "I remember we got off the golf course one day and asked, 'Are you going to show me [how to make jerky] today?' And he said, 'Fine, I'm done with you asking me.' I just grinded him down." 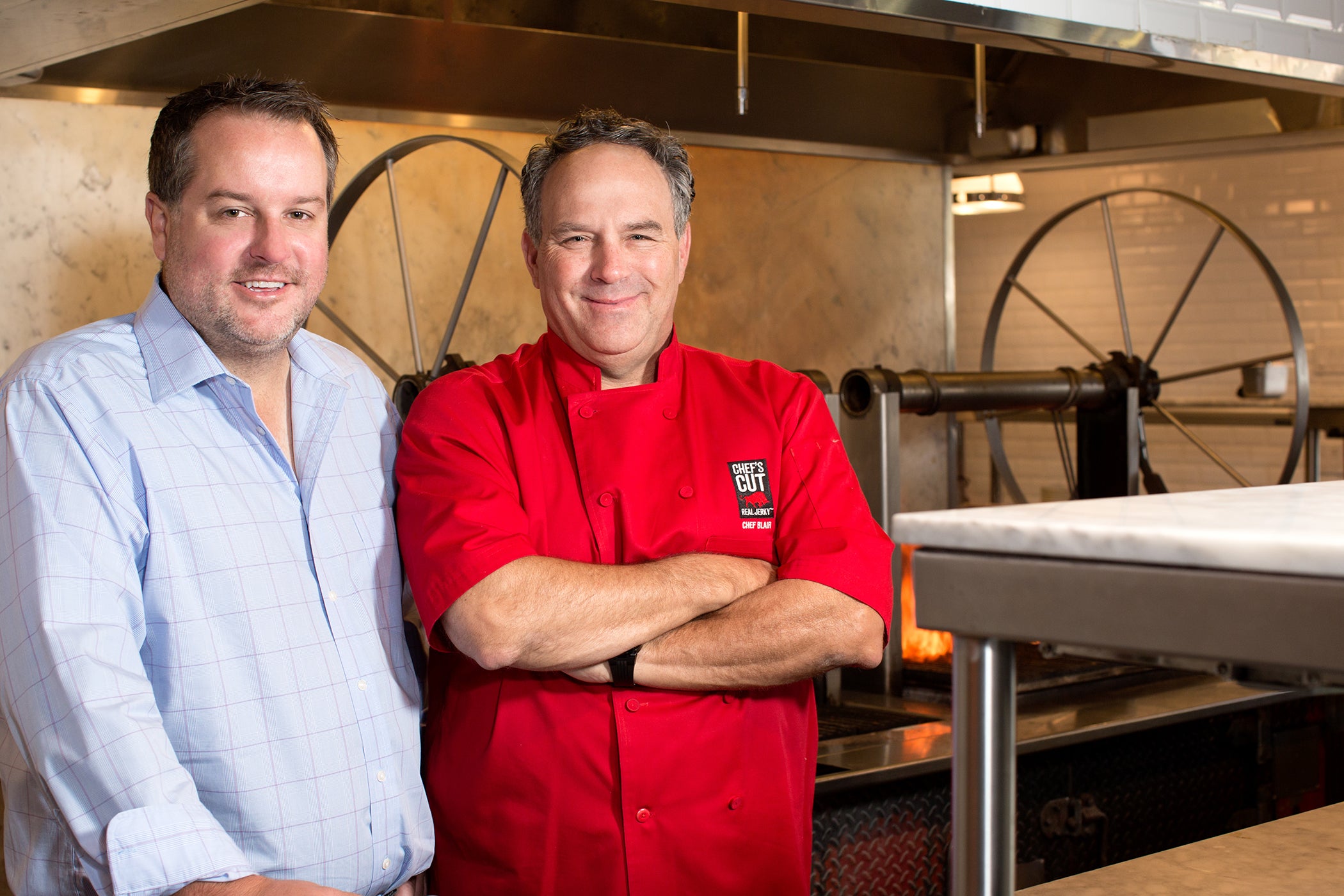 2. The company's first customers were golfers.

In 2009, the pair started selling jerky in plastic bags to members of a New Jersey golf club as well as online.

"It was pretty rogue the first few years," Riedel said. "Then all of a sudden we had all these other golf clubs contacting us. That's when we went out and found some manufacturing to make our product."

3. Chef's Cut first investors were people its founders caddied for.

"You're on a course for four or five hours with some of the most powerful business people in the United States," Riedel said. "To hear the way they think, to hear what they have going on, it's fascinating. Our two original investors were members of the club that pushed us. They didn't even flinch. They believed in us. That's what drove us to get this thing going."

4. Making the product on a larger scale proved to be a challenge.

Swiler had been making 25-pound batches in his kitchen with a five-day process, Riedel said. That wouldn't transfer to a larger scale, where facilities can pump out 500-pound batches.

Related: Building a (Nearly) Million-Dollar Brand on a Startup Budget

"All of a sudden you're looking at commercial dehydrators and massive tumbling machines," Riedel said. "[It was] a whole unique process that we had to figure out. I give Blair all the credit in the world. He spent a few months and figured out that process so that we could actually make it."

Riedel added that Chef's Cut manufacturing process is unique, and actually required its co-packer to sign a non-disclosure agreement.

5. Selling on golf courses helped get the brand into stores.

One of the company's investors set up Riedel and Swiler with veterans of Popchips, who helped out on weekends and evenings. They then got a meeting with the buyer at Sprouts.

"The buyer instantly said, 'I've seen that product on the golf course,'" according to Riedel. "We had Sprouts's 200 plus stores in 2013, and it's been snowballing ever since."

6. Riedel's advice: sell where you know.

"We knew golf and we knew that was a really good niche," Riedel said. "We were able to get our brand out in front of influential people and also it connected the dots for us from an investment standpoint."

But he cautioned that other brands can't just copy their strategy. After all, both Riedel and Swiler were "entrenched" in that world already, as caddies. 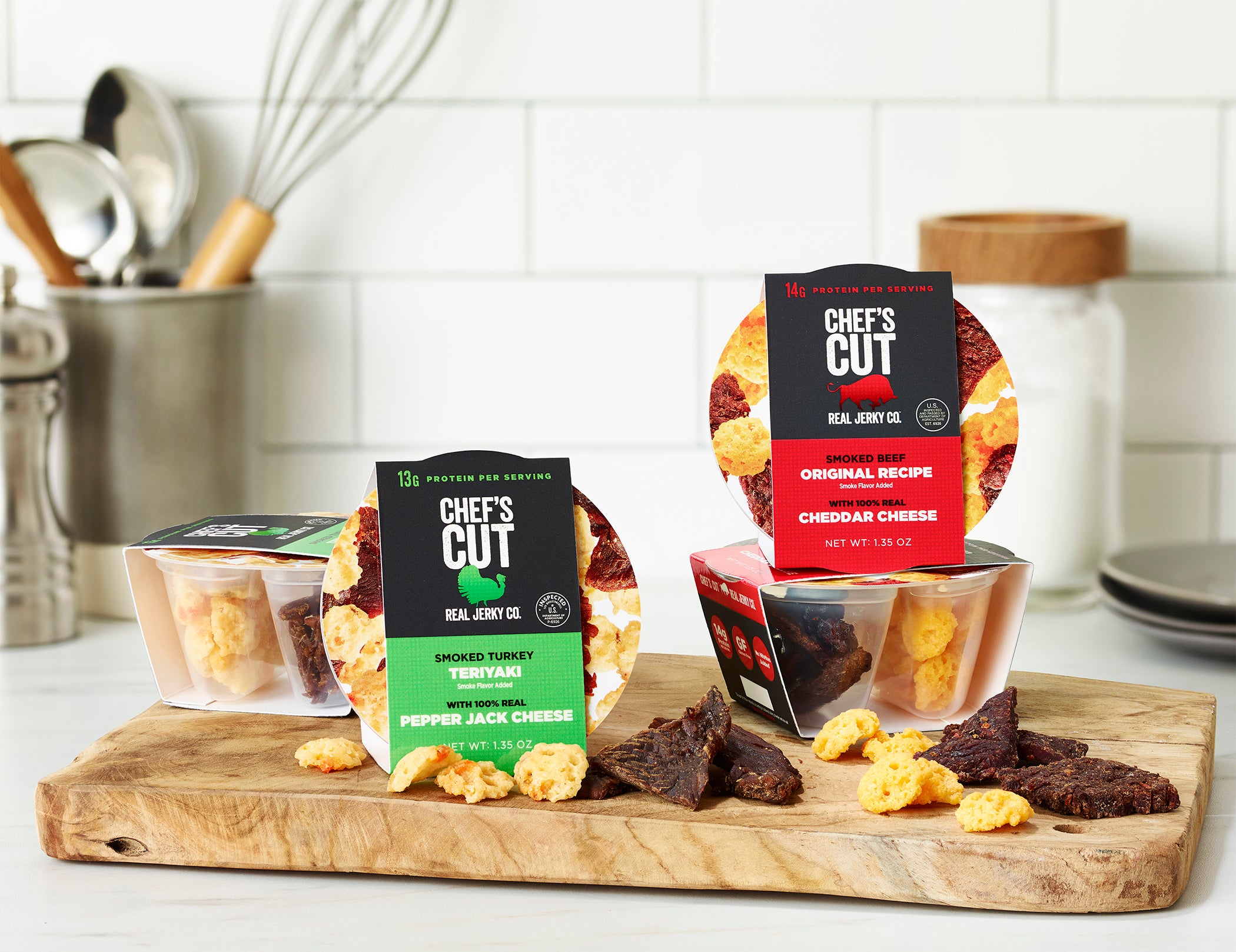 7. The company's biggest challenge is dealing with federal regulators.

Whenever the company wants to come out with a new product, change an ingredient or even alter its packaging, it needs approval from the USDA, which regulates meat, Riedel said. Because of that process, it can take up to eight months for the company to launch a new product.

"[The USDA] may come back and say that ingredient number two should be number three, then you have to resubmit a whole declaration of your ingredients," Riedel said. "They never make it easy and they always make it a challenge."

Related: How This Entrepreneur Behind a Multimillion-Dollar Company Is Disrupting the Seafood Industry

Riedel said choosing the name Chef's Cut was a conscious decision because it's a broad trademark, and considering its potential, the company wants to expand with new products throughout the grocery store. The company's retail partners even asked it to enter the sauce and prepared foods category because of the strength of its name.

"There's other areas of disruption and white space that we see out there," he said. "Our goal for the next three years is to continue to drive our core business but also expand with new offerings, new flavors, but also potentially new areas of the store."