Birch Benders got the attention of Target by working on its packaging and finding its voice.

The founders of Birch Benders, makers of better-for-you frozen waffles and just-add-water pancake and waffle mixes, spent years getting its branding right. But without that effort, the brand would have not have gotten the attention of Target, according to co-founder Lizzi Ackerman.

"It pays off to make sure that you've really perfected the brand and the product," she said. "When you're starting on a shoestring, your best advantage is to take the time to build a great brand, really pour yourself into it, and understand what you're all about. We want to build a brand that's going to be around for 1,000 years."

Ackerman co-founded Birch Benders with her boyfriend (now husband) Matt LaCasse in 2011. The two Yale alumni initially sold their just-add-water mixes in jars at Whole Foods stores in Denver (they had moved to Boulder). They would do demos twice a day every day and request feedback from potential customers.

"At the time we thought we were supporting our sales, but really we were learning what was working in our packaging and product and what wasn't," Ackerman said. "People would be brutally honest, and everything they said, we'd incorporate into [the next] iteration."

Once Birch Benders -- named for the practice of climbing a tree then coming to the ground by bending it -- had some traction and funding, it hired a creative agency and spent another year on its branding.

"All of that time that we put into it definitely paid off, because while our packaging breaks all of the rules of the current trend -- it's busy, it's not minimalist, there's a lot going on -- people love it," Ackerman said. "You don't always have to follow the rules."

The company's products, which include traditional varieties featuring chocolate chips and blueberries as well as paleo, protein and pumpkin spice, can now be found in more than 8,000 stores. Birch Benders' revenues are in the eight digits, the company said. Its Paleo mix is the top-selling pancake and waffle mix at Whole Foods, Sprouts and in the entire natural channel, according to the company.

"Our goal is to offer incredibly delicious convenient products that simplify cooking so you can slow down, enjoy the moment and reconnect with your inner child," Ackerman said. 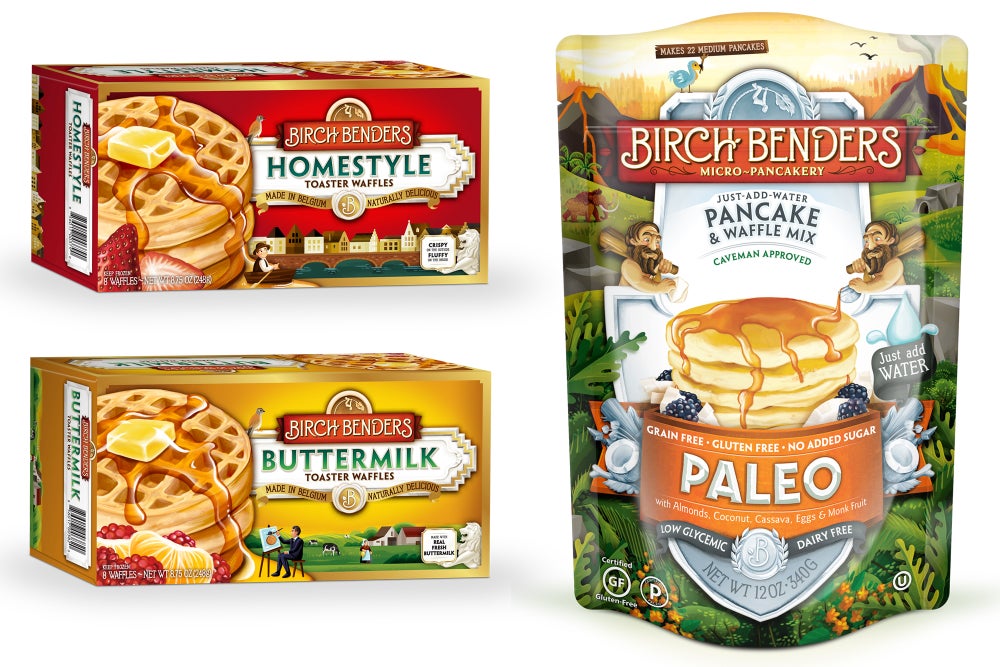 The couple started the brand after college. A "freak" illness that put Ackerman in the ICU for 11 days had inspired her to become a doctor, but she decided to follow LaCasse to Boulder to take a year off and ski ("Pancakes ended up pulling me in, and I was having a lot more fun doing that than studying for the MCATs," she said.). They had no idea they had ended up in the "Silicon Valley of natural foods." As their story goes, one day LaCasse wondered why he couldn't crack open an egg over a griddle and end up with a pancake.

"We noticed that pancakes were a stale category, and anything convenient was full of junk," Ackerman said. "We saw an opportunity to offer just-add-water convenience, organic quality and really stand out. We dove head first and have been crazy ever since."

Entrepreneurship turned out to be a great fit for Ackerman.

"I was never a person who was good at one thing," she said. "I could never figure out what I wanted to do or major in. I loved graphic design. I loved animation. I loved writing. I loved science. What's so awesome about being an entrepreneur is I get to do all of that. I got lucky to find the perfect job that lets you do it all."

Here are more insights from Ackerman:

On the most unusual thing about working in this space

"How quickly things change. This is particularly true in a rapidly scaling business. The problems and the issues you're facing today could be totally different than what you're facing in a month. You need to be able to surround yourself with people that are able to adapt quickly."

On who you should hire

"I'm comfortable with the knowledge of what I'm good at, but I'm also understanding of what I'm not good at. There's no room for ego in business. I love to hire people who I think are a little scary, a little intimidating, and better than me at certain things. I believe that's how you build a company."

"The biggest challenge we ever had to overcome was the avian bird flu, which happened right around when we were going to be getting into Target. So all of a sudden eggs went from a couple of dollars a pound to over $20 a pound, and you could barely get your hands on them. It was horrible, because we used eggs at the time in all the products. What we had to do in order to be able to stay afloat and supply Target was reformulate every recipe we had. That meant new recipes, new packaging. Things like that happen with unstable commodities. It sucks but we pulled it off; nobody even noticed the change in the formulation. It was a great learning experience. We never gave up. You can't."