Why Banning Facebook In Your Workplace Is a Stupid Move

One in five workplaces block access to Facebook, but does banning social media at work boost productivity or hurt morale and erode trust?

The work environment has drastically changed over the last few decades and as more people spend their work days in front of a computer, more employers want to make sure those hours aren't spent on social media. Liking, sharing and commenting aren't allowed in one out of five workplaces as many employers block access to Facebook on company computers, finds New York-based research firm Statista. 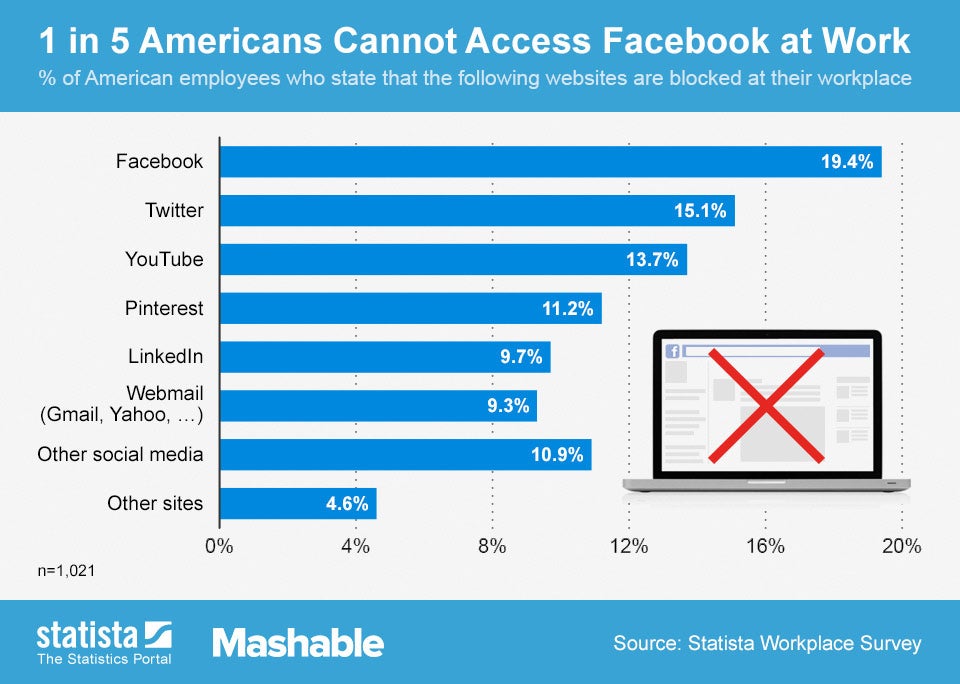 But does banning social media at work really boost productivity or does it hurt morale?

"Time spent on Facebook might seem like time wasted and banning it makes sense on the surface," says Angelo Kinicki, professor of management at the W.P. Carey School of Business at Arizona State University, "But when people go to work, do they sit and concentrate and work for eight hours straight? No, our minds can't take that level of concentration."

To maintain productivity, employees need small breaks throughout the day that will reenergize the mind, says Kinicki. "And Facebook, personal emails and talking at the water cooler are the ways people refresh," he says.

Related: How Your Smartphone Can Actually Save You From Working Weekends

While Kinicki says an employee spending two hours a day on Facebook is a problem, for most people a 15-minute social media diversion is not a big deal. He offers these four reasons why banning Facebook at your workplace might backfire:

1. It could alienate younger employees.
Employees from younger generations, such as millennials, are accustomed to using social media on a regular basis.

"If you start banning it, some employees might look for an employer who will let them use it," says Kinicki. "And you may lose good employees with fresh, new perspectives in the process."

2. It suggests mistrust.
Banning social media may send a message to your employees that you don't trust them, says Kinicki. This can cause a sharp divide in the team atmosphere you want to create.

"Responsible employees know they have a job to do," he says. "As long as they get their assignments done in a timely manner and of the quality you expect, you shouldn't worry about 15 minutes spent on social media."

3. It shows lack of support.
When people feel supported at work, they perform at higher levels, says Kinicki. "It's called perceived organizational support, and it leads to employees who are more engaged and perform at a higher level," he says.

If you create a policy that says employees can't go on or social media, employees won't feel supported and the result may be disengagement and lower productivity.

"Employees are going to take breaks," says Kinicki. "To say they're not is silly. I think employers have to realize that different people have different ways to unplug, and it's wise to support them."

4. It disrupts balance in the workplace.
Productivity is all about balance, says Kinicki, and banning employees from Facebook is like banning them from talking about football at work.

"For some, checking social media is a way to relax for a moment away from your work situation," he says. "Since we allow employees to take smoke breaks, we should allow people who enjoy Facebook the same freedom."

Related: The 15-Minute Strategy to Get More Done Everyday

If customer service is lacking or productivity is down, Kinicki says managers should take a look at how employees are spending their time – but don't assume that social media is the problem. "If your people aren't accomplishing their goals, it may not be a Facebook problem," he says. "It may be that they're not getting coached and motivated properly."

Besides, many employees find ways around social media bans by checking the sites on their smartphones.

Stephanie Vozza is a freelance writer who has written about business, real estate and lifestyle for more than 20 years.