Why Everyone on Your Team Should Leave Work Early Today

By Polly Brewster
July 12, 2013
Opinions expressed by Entrepreneur contributors are their own.

Silicon Valley tech companies are known for outfitting their campuses with cool meeting rooms that include arcade games and pool tables and hip cafeterias where all the meals are free. It's a smart way to let employees have some fun together while also adding a caché to a desk job, but two recent studies show an engaging environment is also good for a company's bottom line.

According to the Towers Watson 2012 Global Workforce Study, engaged employees are twice as likely to be productive and present than disengaged employees. In addition, a recent employee engagement survey by the Australian Institute of Management found that survey participants who were committed to their current job listed a "good relationship with co-workers" as their top reason with salary listed at number seven.

That's good news for companies that can't afford to replicate the Google headquarters. Getting employees to feel connected can be simpler than you expect. We spoke to experts and entrepreneurs for the innovative ways they suggest companies can foster better work relationships.

1. The swivel-head approach. Tending to office morale is easier than you might think, according to Dave Ulrich, a professor at the Ross School of Business at the University of Michigan and co-author of The Why of Work. "We ask managers how long it takes them to sense office morale and they almost always say less than 15 minutes. Wise leaders have their 'heads on a swivel' and are constantly observing subtle signals such as employees leaving early or displaying a lack of intensity." He says that at the first sign of office malaise, a good leader runs right into the problem and openly discusses solutions with employees. Ignoring low morale can quickly lead to lower office productivity and staff turnover. 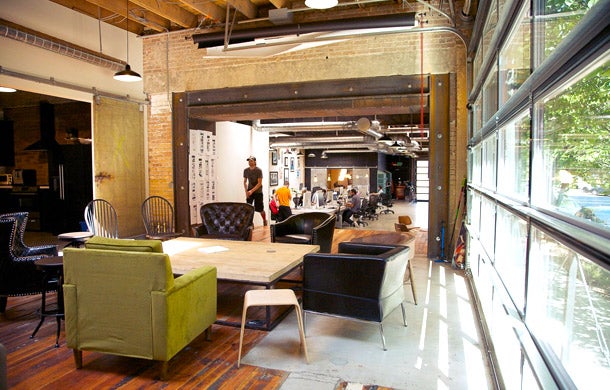 2. Build a culture that cares. Make sure your efforts reach out beyond your staff's high-performers. In the Towers Watson study, only 35% of those studied felt highly engaged with their company's goals – the rest felt either unsupported, detached or disengaged, a massive threat to productivity, turnover and quality. To reconnect and make sure that all your staffers feel cared about on a personal level, create listening posts throughout the organization, says Ulrich, such as town hall meetings, focus groups and one-on-ones between mentors and mentees. Also, make sure you're not valuing crazy work schedules over efficiency. "Some offices encourage a culture that prides itself on 60 to 70 hour weeks, but that schedule is unsustainable and cuts into people's personal lives," advises Elizabeth Grace-Saunders, a time coach and author of 3 Secrets to Effective Time Investment. "Your employees will eventually burn out and leave."

3. The 6" Rule. Consider what your staff has in common and use that to bring the crew together. Whether it's a company softball team or a monthly potluck, when you encourage those activities relationships can strengthen naturally. We Like Small is a digital agency based in Salt Lake City and its staff are almost all outdoor enthusiasts. "So our office has a 6" rule in the winter," says Michael Kern, the executive creative director. "If it snows more than that, and your projects can handle it, you should be out skiing." Their office also has a lot of mountain bike enthusiasts who meet up on summer mornings to do a 2-hour cross-country trail before heading into the office. "We get our work done, but we make sure to still get in some fun."

4. Let trust guide scheduling. The 9 to 5 schedule doesn't work for every staffer and when bosses make exceptions for some, others can feel resentful and disengaged with the team. At Craft Coffee, Michael Horn's solution has been to let his staff of three decide when to make it into their Brooklyn, N.Y., office, as long as the work continues to get done. "It's a matter of trust," says Horn, the founder of Craft Coffee, an artisan coffee subscription service. This trust is repaid with honesty and extra work hours. Staffers find the flow that works for them. His lead tech Nate Berkopec finds himself more productive within the structure of an office, while Briana Kurtz, the manager of coffee relations, prefers to take day breaks to run errands or go to yoga, but logs on from home through the evening.

5. Be transparent. Startups can be a hive of activity, with leaders and staffers in and out of the office hustling for new clients, investors, or projects. All this out-of-office time can make some employees feel disconnected or even jealous. "Some days I might have four different coffee meetings and go out to lunch," explains Horn, who says he realizes his absences could be misconstrued. To combat this, have staffers update each other about where they'll be and why, says Saunders. And if leaders are out at a conference or a corporate retreat, ask them to send a recap to their team on what happened and what you learned. As Ulrich puts it: "When employees understand 'the why' they accept 'the what.'"

6. Make sharing easy. Workspaces should encourage collaboration and chatting. When We Like Small designed its new headquarters, it avoided traditional offices and even cubicles that can put up walls and hierarchies between employees. Instead, it created a "great hall" where staffers can gather at their computers around long table. Additional lounge areas and conference spaces offer varying levels of openness and privacy, making it as easy to share a brown bag lunch as it is to Skype with far-off clients.

Craft Coffee found a similar set-up by renting desks at General Assembly, a shared office space for start-ups in Manhattan. Staffers had their own company work area, but also had access to common areas, where they often bounced ideas off other innovators, and conference rooms to meet with clients or hold brainstorming sessions.

7. Get people creating. Every company has long-term pet projects that aren't always client-driven, but can lead to increased presence or future business. Get those projects scheduled and have staffers brainstorm together, showcasing talents the team might not see otherwise. Every three to six months, the We Are Small team does an inner-agency project that's not about making money but having some fun. Past projects have included an app called Smoggy that tracks air quality (since the smog in their town can be a serious problem) and the Neediest Robot project that used micro-controllers to gather data on their finicky office coffee machine. The projects do more than get the agency noticed. "Our developers and designers really get behind these projects, because it just turns into a completely creative outlet," Kern says.