What I Wish All My Employees Knew About Twitter

By Josh Steimle
July 6, 2015
Opinions expressed by Entrepreneur contributors are their own.

As the owner of a digital marketing firm, it's important to me that my employees, whom I will refer to throughout this article as "team members," are active on social media, especially Twitter. But some of them aren't, and I know some of the reasons why. The feedback I hear ranges from "I don't have the time," "It's too confusing," to "I just don't get it, what's the point?" I understand all these concerns because I've been there.

Like many people, I set up a Twitter account not too long after the service launched. I poked around a bit, and then, confused as to the point of it all, I stopped. My account remained inactive for years, and it wasn't until the past two years that I became active on Twitter and fell in love with it. Now I can see that being active on Twitter doesn't have to take a lot of time, once you learn a few key things.

There is great value for individuals and businesses that use Twitter effectively. What follows is a simple beginner's guide to using Twitter, based on what helped move me from inactive to active on the service. It's also what I wish all my team members knew about Twitter.

First, why should you be active on Twitter? Here are a few reasons:

Do any of the above apply to you? Then Twitter is an excellent tool to help you get there. Here's how.

The process is straightforward enough. The main thing I see beginners neglect is to complete their profiles. Upload a photo of yourself. Don't leave the default egg as your avatar. Fill out your 140-character bio, link to your website and upload a banner image. These are small and simple things, but they make a big difference when it comes to gaining followers and interactions from others.

If I want to make sure I never miss what someone is tweeting, I turn on mobile notifications for that person. This is easier to do on your phone than on the desktop. Simply go to that person's profile using the Twitter app on your phone, and tap the gray star next to the "follow" button, which we'll assume you've already tapped. Once you do this, you'll get a notification every time this person tweets. I do this with almost everyone in my company and encourage my team members to follow and turn on mobile notifications for all their fellow team members as well. 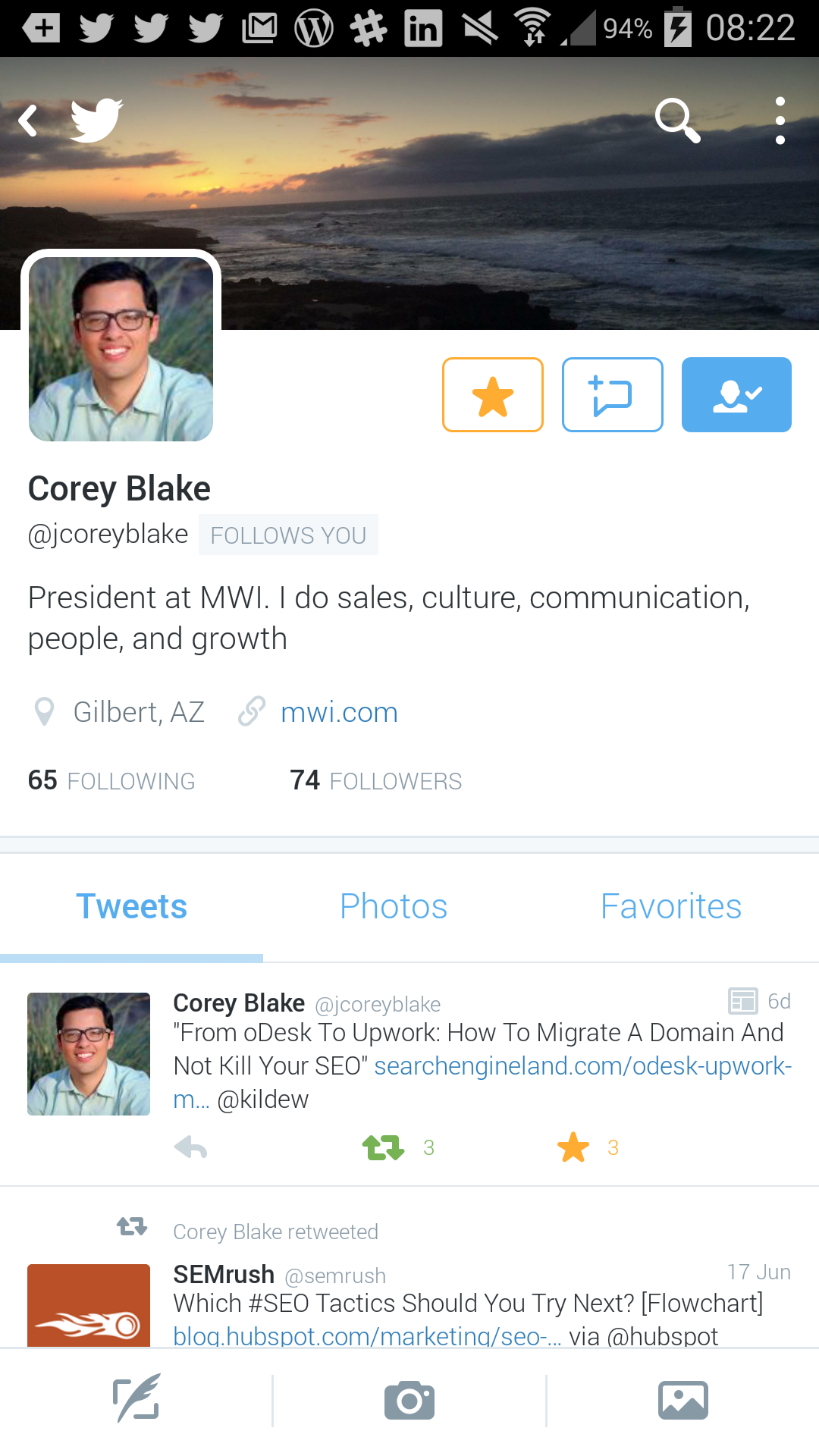 If you see a tweet you like and want to share with everyone who follows you, then retweet it. This should be default behavior when your fellow team members tweets something, as long as it's relevant to the business. I generally favorite any tweet I retweet, but sometimes I favorite tweets without retweeting them. This is because I sometimes use the favorite function as a way to track tweets I want to revisit later.

Beyond basics such as "Don't spam" and "Be nice," look at Twitter as a conversation in a crowded room. If you have something you believe is interesting, then share it, and be prepared to engage in a dialogue if someone else responds to your tweet.

How often should you post on Twitter? According to SumAll, a tool that helps track data about social media accounts, three times per day is ideal, but that may vary depending your circumstances.

It's amazing how something so simple has confused so many, including myself. A hashtag is a word preceded by the number sign (#), with no space between the number sign and the word. When you join the number sign to a word, it will highlight the word in a tweet, and turn it into a link. When someone taps or clicks on that link, it will show them all the tweets on Twitter that are using the same hashtag

Hashtags are used not just on Twitter, but on Facebook, Instagram and Google+, so it's worth spending some time to learn how to use them effectively. Digital marketing expert Neil Patel collected statistics on hashtags and put together a great blog post and infographic to create The Ultimate Guide to Hashtags. One interesting stat Patel included, with data provided by Linchpin SEO, is that followers are twice as likely to engage with tweets with hashtags. A 100 percent increase in performance sounds like a good enough reason to use hashtags.

Note: Don't use too many hashtags in your tweets. One or two is generally recommended, and rarely more than three.

Don't underestimate the power of Twitter search. You can search by keyword, Twitter handle or username or hashtag, and that's just to get you started. It's a great way to find people to follow, identify who's talking about topics you care about and engage in conversations.

If you follow someone on Twitter and they follow you as well, you can send direct messages to each other that are private. You used to be limited to 140 characters on these direct messages, just like tweets, but Twitter recently removed that limit. But be careful, just because you can send a message to someone doesn't mean you should. I rarely use the direct message feature, and if I do, it's only to send a brief message. If I'm looking to engage the other person in a more extensive dialogue I move the conversation to email as quickly as possible.

Some people have used services to automate the process of following back anyone who follows them, and then sending them an automatic direct message. As social media expert and bestselling author Bryan Kramer recently stated in a Twitter chat:

A9: Let me be blunt, I hate auto tweets in DM's on Twitter. It's the worst marketing I've come across #viralchat

When you see someone with a lot of followers, don't believe the hype. It was recently reported that up to 35 percent of U.S. presidential candidate Hillary Clinton's Twitter followers are fake. The same goes for many celebrities and business personalities. It's not hard to buy fake Twitter followers, but other than boosting your follower count there isn't much value in them, since they don't engage in any other meaningful way. If you want to build a real following, then implement these simple tips:

This last part about focused content is key. If you tweet about SEO 90 percent of the time, someone who follows you knows what they're going to get. If your tweets include equal parts politics, cats, SEO, startups, photos of your food and inspirational quotes, then you're likely to turn everyone off and attract few followers.

One more tip: Include a link to your Twitter profile everywhere you can. I have buttons or links on my blog, in my email signature, on my online bios and I include my Twitter handle in slide decks whenever I speak at an event.

A book could be written about all the tools available to manage your Twitter account. Here are a few I've found useful.

All of this may sound confusing and time-consuming, but take it one step at a time. Don't use any of these tools for the first few weeks, just use the app and get used to following, retweeting and favoriting. As you use the app, you'll start thinking "I wish I could …" and then you can come back here to see if the tools I've suggested will help you do what you want to do.

In order for me to get the hang of Twitter it took about three weeks of focused effort. Every day I pulled it up on my phone and spent 10 to 15 minutes using it. By the end of the month I not only "got it" but I was hooked. Now it's a priority for me to access every day because of the value it drives for me and my business.

Give it a try. You'll soon be hooked as well.

Related: 10 of the Dumbest Social Media Blunders Ever