GoldieBox, a toy company on a mission to get girls excited about engineering, won a national competition sponsored by Intuit and will be featured in a 30-second commercial during the Super Bowl.

The small team of employees at GoldieBlox isn't used to having a crew of black limos pull up in front of its Oakland, Calif.-based office. And the family-run toy business whose mission is to encourage girls to embrace math, science and engineering definitely isn't used to bright lights and camera crews in its offices.

"My hair was a mess that day," says Debbie Sterling, Goldieblox's founder and CEO, remembering the day in early November when she found out her company was a finalist in a competition hosted by Intuit to win a Super Bowl commercial. The limos and camera crew descending on the GoldieBlox office overwhelmed the intimate staff. "It was like a SWAT team. We were completely caught off guard."

Bill Rancic, the entrepreneur and television personality who was the first winner of The Apprentice a decade ago, delivered the news. "Everyone in [Sterling's] office was crying. They were so happy for her," he says.

GoldieBlox makes narrative-driven toys featuring a girl named Goldie that introduce girls to the basic principles of engineering. The toys have exploded in popularity, going from the pages of Kickstarter to the shelves of Toys "R' Us in less than a year.

After a month of serious hustle to get her customers and fans to vote for GoldieBlox, Sterling got a phone call in early December from the Intuit team telling her that she had won the grand prize. The 30-second ad spot costs more than $4 million alone, not to mention the production costs, which put the total price tag at somewhere in the "double-digit millions," says Rancic.

Commercials in the Super Bowl are considered the crème-de-la-crème of advertising. You can't get a more coveted spot of television time. And so, historically, the ad time has been completely off limits to anyone other than the biggest companies with the deepest pockets. Small businesses typically have no shot whatsoever at buying ad time during the big game.

For Sterling, winning this spot is a dream come true. Like a true social entrepreneur, she is especially excited about what this will do for her cause.

"I know this is a huge win for our company, but it is a bigger win for all the girls," she says. Sterling hopes it will inspire parents and teachers to reexamine the values they pass down and encourage them to show young girls something beyond the closet full of princess toys. "That is the win – double-digit millions behind that."

The campaign from financial software company Intuit was born about a year ago and solicited 16,000 small-business applications. To be considered, a small business had to have less than 50 employees and be located in the U.S. The 8,000 staffers at Intuit voted the applicant pool down to a final four and then a third-party put the final four small-business contestants out to a vote from the American public. Millions voted. 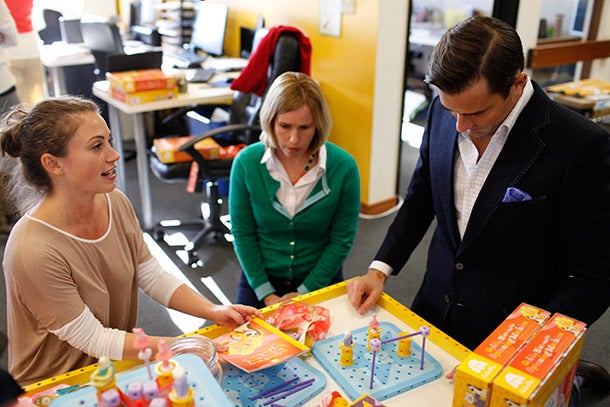 The final four all received media buzz and customer attention from their top placement. The founders of the composting venture, for example, "can't walk down the street anymore without it being -- "You're the poop guys!'" says Rancic.

Related: From Poop to Dog Treats: Which Small Business Should Win a Free Super Bowl Commercial?

Which, in a sense, was exactly the point of the Intuit program, called Small Business Big Game. "At the end of the day, the program is really all about shining a spotlight and celebrating the 29 million small businesses we have in America," says Rancic. "In many cases, the small business owner is the unsung hero. They are the ones rebuilding Main Street."

The GoldieBlox team, which was all of two employees a year ago, is now 15 people, and is hiring by the week. Sterling envisions GoldieBlox becoming a brand that extends to clothing, novels, an animated series and a digital platform to teach young girls the fundamental principles of engineering, math and science. "Think about the Disney Princess franchise, where every part of a girl's life she can live like a princess. We would like to do the same thing, but have her live like an inventor," says Sterling.

In the meantime, Sterling and her team are ramping up production to prepare for the anticipated post Super Bowl commercial rush of interest. They sold out at Christmas and can't produce toys fast enough.

Just last week, GoldieBlox started selling in Target, a deal Sterling credits to the publicity generated by the Intuit contest. "Target is a pie-in-the-sky dream for us," said Sterling. "Just imagine, the average American family having this be on the shelves of Target: the girl with the tool belt and her overalls."

Check out the teasers for the GoldieBlox commercial below.