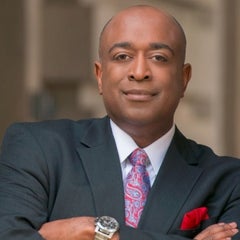 As CEO of the technology company I-Cubed, Donald Thompson was given the reigns at age 36, and dramatically grew the organization until it was acquired by the global technology enterprise, KPIT in 2014. Currently, Donald is the CEO for Creative Allies, an integrated marketing firm that focuses on helping celebrity and consumer brands execute marketing campaigns and engage customers. Donald also serves on the Board of Directors for iCiDIGITAL, a spin off business from I-Cubed, where he groomed his successor from technologist to President. Donald was appointed to the North Carolina Board of Science, Technology and Innovation, is an emeritus member of the strategic advisory board for North Carolina State University‘s Computer Science Department, and is Executive Chairman for Walk West. With a focus on accelerating North Carolina's next generation of technology companies and entrepreneurs, Donald also is an advisor and investor to several startups and successful firms. A former college athlete, Donald has stayed involved in sports as franchise owner for the Navi Mumbai Sabers of the Elite Football League of India and the High Country Grizzlies of the Arena Developmental League. Donald is currently authoring his first book, Underestimated: A CEO’s Unlikely Path to Success. Learn more at donaldthompson.com

3 Reasons You're Not Getting the Feedback You Need

Get what you need.

The Truth About Winning Is That it Requires a Team

A firm's success or failure is a clear reflection of the leadership capacity.

Learning From Failure Is What Makes Entrepreneurs Better Leaders

A CEO shares a few of his past failures with the hope you don't have to learn things the hard way.

Black Is the New Black: An African-American Entrepreneur's Manifesto