A Recipe for Entrepreneurial Success Requires This One Ingredient

The founders of two food businesses say this is the absolute must-have for any growth-minded entrepreneur.

What's the key to entrepreneurial success? The answer depends on whom you ask. Some will say you need a great idea. Others will say financing is most critical. Others still will tout the benefits of building and working with a strong team.

They're all right. And, yet, the one thing almost everyone agrees successful business owners must have is passion.

Take it from Sarabeth Levine. In the late 1970s, Levine was an insurance salesperson who wasn't particularly fond of or interested in the work. It paid the bills and put food on the table. Up until then, Levine had worked a string of professions—house cleaner, waitress, oral surgeon assistant—but none ever gave her much satisfaction.

It was around that time she told her mother, Dore Blume, that she "felt like a nobody," Levine recalled during a panel discussion at the recent Chase for Business Conference in New York City. "She told me, 'You are a somebody, you just haven't found her yet,'" Levine said.

Levine's perspective changed in 1981 when she and her husband, Bill, opened a small bakery-kitchen in Manhattan called Sarabeth's. Levine had a passion for making homemade orange-apricot marmalade, among other baked goods and specialty foods. Levine was hungry for something substantial that would spark her interests and desires.

With Sarabeth's, Levine found herself, she said. She found her passion.

It's that passion, as well as the popularity of her "magic marmalade," that made Sarabeth's into the thriving operation it is today, Levine said. In 1996, Levine was honored with the prestigious James Beard Award for Pastry Chef of the Year and since then, the company has been focused on expansion. Sarabeth's consists of 16 restaurants, with three more opening soon, including one in Dubai. The company also owns a 15,000 square foot factory in the Bronx where the marmalade is jarred, and her spreads are sold in department stores and specialty shops throughout the U.S., the Caribbean, Canada, Japan and South Korea.

By loving what she does, Levine in turn makes others happy. After all, pleasing people is at the core of a succesful hospitality business. "I have a path," Levine said. "I have to love what I'm doing. If I don't love it, then it becomes work."

Hire people who share your passion. Even though Levine already was an accomplished home baker, she hired "very talented" bakers to help her grow the business. "The more I learned about people, I learned how to get the best out of my employees," she said. "The payback, for me, is to see the quality of our bakers and our chefs and how they care."

Always be consistent. "You're only as good as the last meal that you send out," Levine said. If the quality of your works slips, you're bound to hear it from your customers --and they won't be happy. "If I give one bad meal, or one bad croissant I'll hear about it," she said. 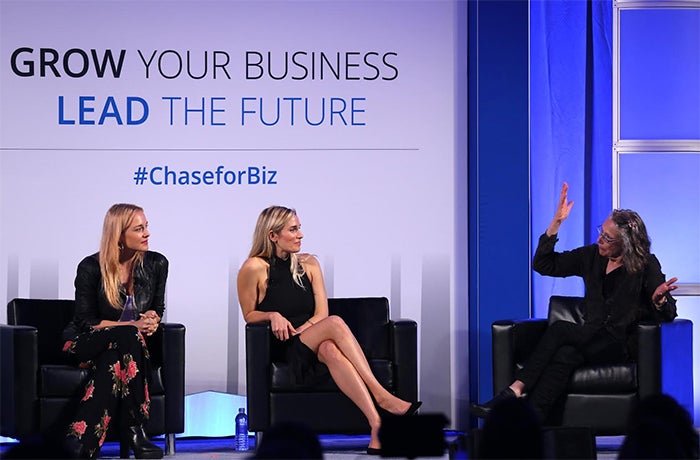 Danielle Duboise and Whitney Tingle have a similar story, which they also shared during the panel discussion. In 2012, the pair co-founded New York City-based Sakara Life, an organic meal delivery and healthy living company that helps clients achieve health and a sense of well-being.

Before launching Sakara Life, Tingle worked in finance but long hours, stress and poor eating habits began to take their toll on her body and her spirit, she said. Similarly, Duboise's pursuit of an acting career left her feeling stressed and unhappy about food.

Tingle and Duboise wondered if food could actually be at the heart of a happy and healthy life. So they started Sakara Life with a "mission to make as many people as possible know that food is medicine," Duboise said. As their website reads, "We believe that what you put into your body forms the building blocks for the rest of your life and affects your relationships, career, happiness, and ability to create."

What started with Tingle and Duboise cooking food in their kitchen in Manhattan and delivering it by bicycle quickly generated a following, including celebrities. Soon, they were delivering their healthy foods in Boston, Los Angeles, Washington, D.C., and Miami. All the while, it was their passion for healthy eating that fueled their growth. Earlier this year, Sakara Life announced a $4.8 million funding round and that it was expanding its delivery service nationally.

"You're all in when you decide to become an entrepreneur," Tingle said. "Making decisions that either grow or hurt your business, it requires all of your passion and ultimate focus, 24/7."

Don't wait for the perfect time to start. "If we would have waited until we had all the answers…everything perfectly in place and all the knowledge at that point, then we would have never started," Tingle said. "We started just by getting going, by making the food the best way we knew how even though we're not chefs."

Capitalize on organic marketing. It wasn't long after starting up that their customer base began to grow client by client thanks to the power of word-of-mouth. "When you're creating a product that changes people's lives, they want to tell their friends," Tingle said.