Online courses to improve time management and remote work are on the rise.
Next Article

Coursera has released its 10 most popular titles as of 2019 , which are a good indication of where the world of work is heading. There are no prizes for guessing digital skills and artificial intelligence, which occupy seven of the top 10 spots.

1. Machine learning led by Stanford University professor, computer scientist, and Coursera co-founder Andrew Ng remains one of the most enrolled MOOCs of all time.

2. Learn to learn: Powerful mental tools to help you master difficult subjects , taught by Dr. Barbara Oakley of the University of California, San Diego, focuses on learning and memory techniques employed by experts in all fields .

3. The Science of Wellness , led by Laurie Santos of Yale, aims to increase student happiness and productivity.

4. Programming for everyone: Starting with Python , the fundamentals of computer programming are taught.

5. AI for All , also led by Andrew Ng, looks at the terminology and ethics around AI and how organizations can build an AI strategy.

6. Neural Networks and Deep Learning is led by Andrew Ng and promises to improve the career prospects of those who take it, as deep learning is emerging as a "superpower."

7. English for Career Development - partially funded by the US government, this is for non-native English speakers who want to "advance their careers in the global marketplace", including advice on the process of interviews in the US

10. What is data science? - Taught by two IBM data scientists, this beginner's course dates back to the time when ancient Egyptians first used census data to increase efficiency in tax collection.

The rise of distance learning

MOOCs have been around since 2008, when 25 students attended a course on connectivism at the University of Manitoba - with 2,300 joining online worldwide.

They really hit the public consciousness around 2012, when Coursera was created. It partnered with universities to offer courses online, typically with a mix of active participation and self-paced study using filmed lectures and reading lists. Its closest competitor, edX, is a joint venture of Harvard and MIT.

As the name suggests, MOOCs are designed for unlimited participation and are free, subsidized, or much cheaper than traditional higher education courses.

Although they have been criticized for their low completion rate - an MIT study found an average quit rate of 96% over five years - that has done nothing to stop the demand. In 2019, MOOCs had attracted 110 million students and more than 900 universities around the world had submitted 13,500 courses. 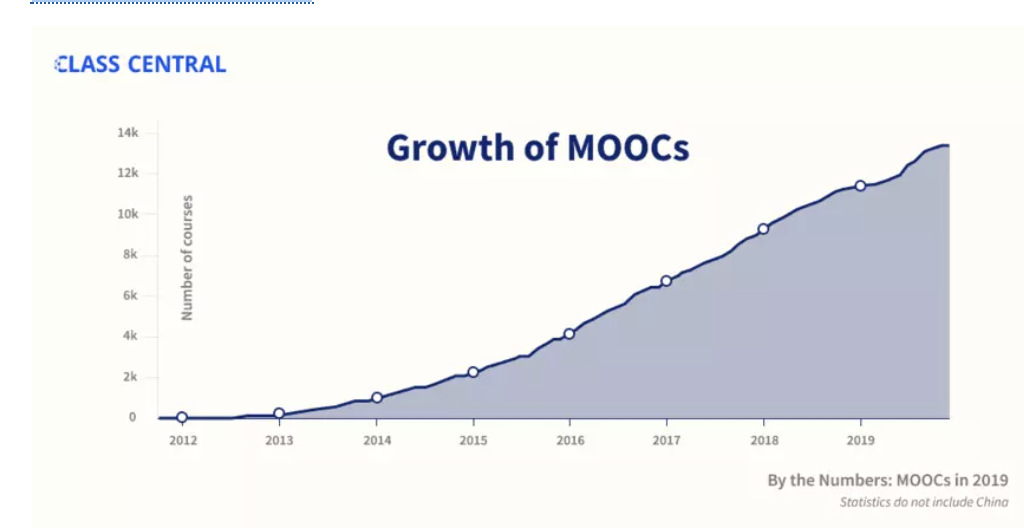 MOOCs have been increasing dramatically since 2012 / Image: Central Class

At his first virtual conference, held in spring 2020, Coursera Product Director Shravan Goli reported that the pandemic had seen a 1,500% monthly increase in demand for personal development content between February and March.

Most courses in all MOOCs fall under the business or technology banner, which gives some indication of where people feel the world of work is moving and what skills will be of use in the decades to come. (For comparison, in 2019, MOOCs in art and design represented 5.2% of available courses, technology 19.8%).

LinkedIn just launched its most popular learning courses as well , and these again reflect the changing economy: time management: Working from home has been the most favored course this year, followed by Strategic Thinking, then Distance Work Fundamentals.

This month, the World Economic Forum's Job Restart Summit will examine these trends in the broader context of a world emerging from a COVID-induced economic crisis and the need to find a more equitable, inclusive and sustainable approach to work. .

The virtual meeting will take place over four days and will bring together leaders from companies, governments, civil society and the media to shape solutions for job creation, social justice and skills enhancement, where MOOCs can undoubtedly have an even more important role to play.

After 15 Years in Hollywood, This Visual Effects Artist Left to Create an Online Film Academy. Here Are His Dos and Don'ts for Course Creators.

How to Create an Online Course That Sells In 6 Steps