Bitcoin Could Cost Upwards of $300,000, But Its Fall Will Be Brutal, Cryptocurrency Expert Warns

Bobby Lee, co-founder of cryptocurrency exchange BTCC, said that the Bitcoin 'bubble' is set to burst after reaching its peak.
Next Article

Entrepreneur en Español
Entrepreneur Staff
March 23, 2021 3 min read
This article was translated from our Spanish edition using AI technologies. Errors may exist due to this process.

After analyzing the history of the growth Bitcoin, cryptocurrency expert Bobby Lee has projected that the digital currency could reach $300,000 per unit (about 6 million Mexican pesos at the current exchange rate). However, he warned that, after reaching its maximum peak, it will suffer a brutal fall, the damage of which will be impactful for years.

The co-founder and former CEO of cryptocurrency exchange BTCC predicted that the Bitcoin "bubble" will burst, causing a long-term decline.

"Cycles of rise in the Bitcoin market happen every four years and this is a big one," explained Lee, who is currently the CEO of Ballet, an app that works as a cryptocurrency wallet. "I think it could really go up to more than $100,000 this summer," added the expert, in an interview with CNBC .

Bobby Lee explained that Bitcoin "could go down a lot and that's when the bubble bursts." He explained that ,in the crypto asset industry, it is known as "Bitcoin winter" and that it "can last two to three years."

Taking into account that Bitcoin started 2021 trading at around $30,000 per unit, the specialist predicts that it could reach "even a value 10 times greater than that." That is, the most popular cryptocurrency would reach $300,000, but he clarified that he is not sure that history repeats itself.

In the first quarter of 2021 alone, Bitcoin has broken its own records several times. At the beginning of March, it reached an all-time high, exceeding $60,000 per unit.

Currently, the price of Bitcoin is around $55,000 (about 1,144,602 Mexican pesos), according to data from CoinDesk and CoinMarketCap. 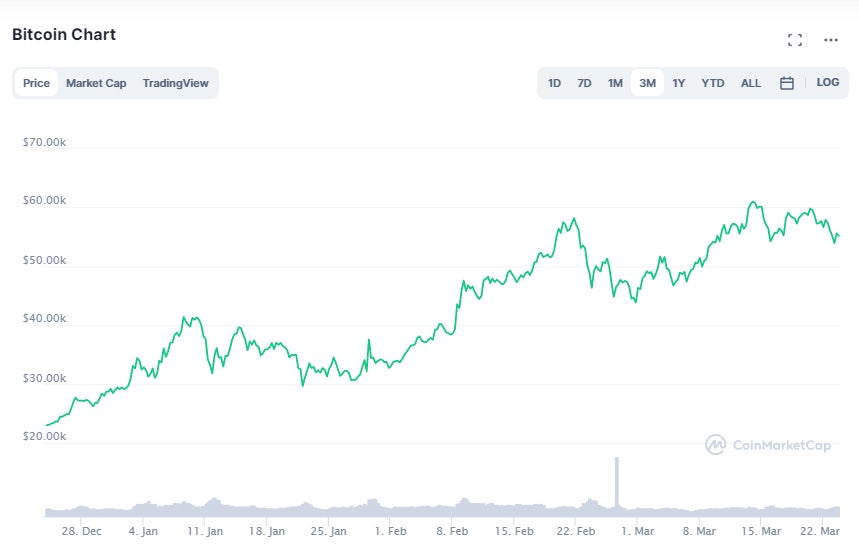 Despite its surprising growth, the "Bitcoin winter" could affect the cryptocurrency for years. Lee noted that investors should be aware that the value of this digital asset could fall 80% to 90% from its all-time peak.

"Bitcoin is very volatile, but the rewards are risk-adjusted, I think," concluded the specialist.

Canaan Stock May Be an Alternative Way to Trade Bitcoin