4 possible benefits of the adoption of bitcoin in El Salvador, according to Bank of America

Analysts from the US banking institution believe that the adoption of bitcoin as legal tender can benefit the Central American country in four important areas.

By Entrepreneur en Español August 3, 2021
This article was translated from our Spanish edition. Opinions expressed by Entrepreneur contributors are their own.

Analysts at Bank of America (BoA) , a US banking institution, believe that the adoption of bitcoin as legal tender can benefit El Salvador . This was explained in a global report, of which Nayib Bukele , president of the Central American country, published a fragment on his social networks. 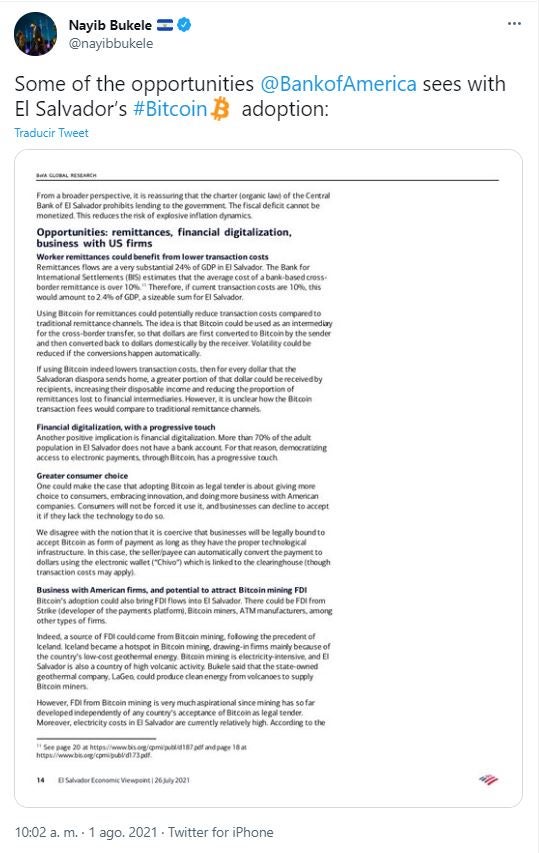 The report of the North American company explained four reasons why El Salvador could see benefits thanks to the adoption of the crypto asset, which are:

1. Reduce the cost of remittance transactions

According to the institution, workers outside the country who send money could benefit from lower transaction costs and highlight that remittance flows in El Salvador are fundamental since they represent 24 percent of its GDP.

The average cost of a cross-border remittance made at a traditional bank is over 10%, according to the Bank for International Settlements (BIS). According to the report, this would be equivalent to 2.4% of the Central American country's GDP.

“Using bitcoin for remittances could potentially lower transaction costs compared to traditional remittance channels. The cryptocurrency could be used for the sender to convert their dollars to it and then transform them back to dollars domestically for the recipient. Volatility could be reduced if conversions happen automatically, ”says the document.

According to the BoA, the adoption of the digital currency would democratize access to electronic payments, since more than 70% of the adult population of the country does not have a bank account.

3. More options for the consumer

Likewise, the document clarifies that they do not agree with a coercive idea that companies are legally obliged to accept the cryptoactive. Both consumers and businesses can refuse, especially if they lack the technology to do so.

Among the possible investments that the Central American country could attract, the BoA highlights payment platform developers, ATM manufacturers, and bitcoin miners, among others.

In June of this year, the Congress of the Central American country approved a law that converts bitcoin into legal tender in the country.

Its so-called “Bitcoin Law” establishes that the objective of the regulation of the crypto asset as legal tender is unrestricted with liberating power, unlimited in any transaction and for accounting purposes it uses the dollar as the reference currency.

How DeFi Can Help the Global Economy Recover