Here's Why Silver Should Outperform in 2022

By Taylor Dart February 8, 2022
This story originally appeared on StockNews

Silver (SLV) is an outperformer to start 2022 with a 1% drop while the S&P 500 is down 7%. Silver could explode higher this year if the economy slows and the Fed is forced to abort its hiking cycle.

It's been a volatile start to the year for the major market averages, with the Nasdaq 100 Index (QQQ) diving 10% from its highs, and many mega-tech names taking an abnormal beating. However, amid the turbulence, precious metals have managed to hold up quite well, giving up ground grudgingly and sitting just shy of positive performance year-to-date. This is a change of character from what some might be used to, with most 12-15% corrections in the Nasdaq causing a ripple effect, with weakness leaking into other assets.

At least for the time being, this is not the case for silver (SLV), which is down just 1% year-to-date, outperforming the Nasdaq 100 Index by more than 1000 basis points. Despite this outperformance, sentiment for silver continues to remain in the dumps, given that precious metals have been in an 18-month plus bear market. However, with a strong fundamental backdrop of negative real rates, I expect 2022 to be a much better year, especially when combined with the favorable technical picture for silver. Let's take a look below:

Beginning with bullish sentiment, we can see that long-term sentiment for silver is in the lower portion of its multi-year range, with sitting near 35%, which suggests there are two market participants bearish for every one that is bullish. Typically, outside of secular bear markets, silver has seen strong 6-month and 12-month forward returns from similar readings, with the last time sentiment was at similar levels being November 2020. For those unfamiliar, silver saw a forward 6-month draw-up of 31%, a forward 6-month return of 19%, and a forward 6-month drawdown of 4%, translating to a nearly 5 to 1 reward/risk ratio (drawdown relative to return).

While some investors might argue that the pervasive bearish sentiment makes sense given the backdrop, with anxiety about an initial rate hike in March, and a metal that's been in steady decline since Q2 2021, I would argue differently. This is because the initial rate hike after a cutting cycle is often positive for precious metals, and acts as a "buy the news" event, with the metals correcting in anticipation of the initial hike. This is what we saw at the time of the December 2015 Federal Reserve Meeting.

Meanwhile, though silver's daily chart remains in a sloppy and volatile range, the long-term picture has never looked better. In fact, silver has spent the past year consolidating and has now pulled back to its multi-year breakout level at $21.00/oz. Typically, this is a very bullish setup. This is because speculators often rush into an asset class in droves following a breakout which can push optimism to extreme levels. However, the subsequent pullback forces those same speculators to lose interest, exactly at the time when the overbought condition has been completely relieved. This is what we appear to be seeing in silver, which is confirmed by sentiment and the technical picture. 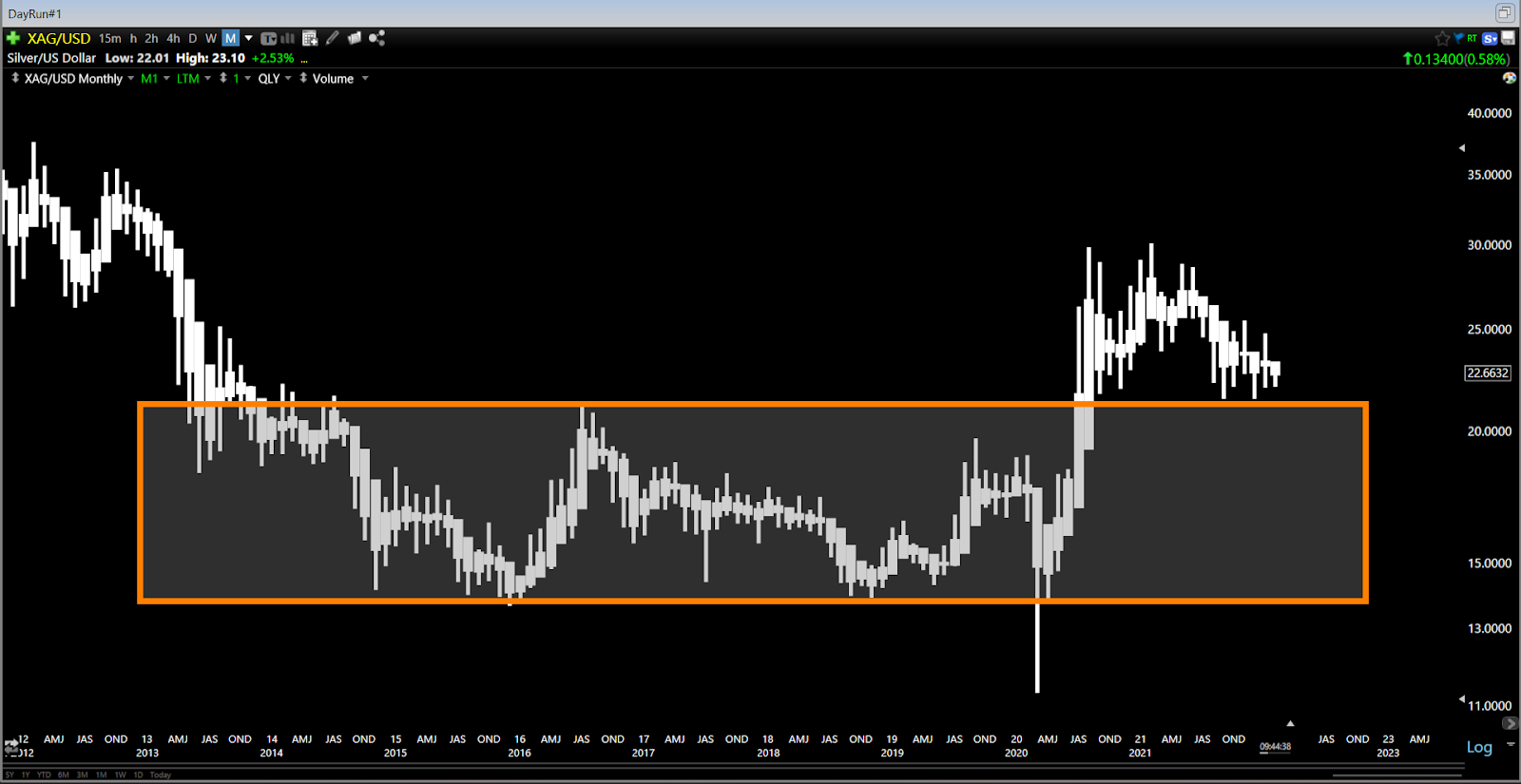 So, what's the best course of action?

As the daily chart below shows, silver has strong support at $21.80/oz to $22.00/oz, and no meaningful resistance until $24.90/oz. Given that the metal is trading in a range for the time being, it makes the most sense to buy as close to support as possible. So, for investors looking to add exposure to silver, I see the ideal buy-point being $22.20/oz or lower.

Meanwhile, for investors looking for leverage to the silver price, I continue to see the most attractive way to play the metal being GoGold Resources (GLGDF). This company is drilling out a new silver district (Los Ricos) in Jalisco State, Mexico, and looks to have uncovered 320+ million silver-equivalent ounces. A resource of this size makes it one of the most significant discoveries in years, and I believe GoGold is a potential takeover target for other silver producers looking for growth. Hence, I would view any pullbacks in the stock below US$1.90 as low-risk buying opportunities.

With a Fed rate hike less than two months away, it's understandable that some investors might be neutral to bearish on precious metals like silver. However, I believe the rate hike has already been priced into gold and silver, given that they have spent more than 12 months correcting from their highs. Therefore, I would view any further weakness in both metals as a buying opportunity.

Disclaimer: Taylor Dart is not a Registered Investment Advisor or Financial Planner. This writing is for informational purposes only. It does not constitute an offer to sell, a solicitation to buy, or a recommendation regarding any securities transaction. The information contained in this writing should not be construed as financial or investment advice on any subject matter. Taylor Dart expressly disclaims all liability in respect to actions taken based on any or all of the information on this writing. Given the volatility in the precious metals sector, position sizing is critical, so when buying precious metals stocks, position sizes should be limited to 5% or less of one's portfolio.

The post Here's Why Silver Should Outperform in 2022 appeared first on StockNews.com