By Jason Daley
November 12, 2009
This story appears in the December 2009 issue of Entrepreneur. Subscribe » 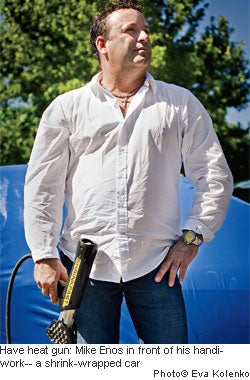 Mike Enos has covered them all--in high-grade polyethylene plastic, to protect them from the elements and the economic storm. But when Enos started Fast Wrap just two years ago, a bad economy was the furthest thing from his mind.

In fact, he first got the bright idea to shrink-wrap his airboat after noticing a semitruck full of tightly wrapped, fresh-from-the-factory speedboats on the highway. So he bought a heat gun and a roll of specialized plastic and shrank it around his boat. It wasn't until years later, after he'd sold his porta-john rental business to go to Baja to tournament fish, that Enos began to realize the potential.

"I was getting bored with fishing after nine months, and I decided I wanted to start another business, but this time I wanted to go national," says Enos, 43. "I realized there's a real need for this protection, and there was no one offering it in most industries." He soon hooked his last billfish, returned home to Reno, Nev., and began building his new venture.

Today, Enos and his franchisees shrink plastic around tractors and construction sites, hay bales, patio furniture, industrial machinery--almost anything that needs to weather the elements or long-haul shipping. His 37 locations (many to open next year) are mainly on the East and West coasts and in Texas, and they have sealed up a AAA baseball stadium, the Lake Tahoe Ritz-Carlton and a Federal Aviation Administration control tower in Reno. What's next? "We say we'll wrap anything," he says, "and we do.

Why did you jump into franchising?
I didn't want to start a business and then have two or three competitors jump in, so I built the business and franchise program at the same time. When I first contacted the IFranchise group, which structured my business, they said, "You want to franchise a business that isn't even a business?" and declined me. But then I spent six weeks explaining my plan and they said yes. A year later I was approved to sell franchises.

Do you have any competition?
In the 16 years since I first wrapped my boat, none has developed at all, though there are some guys who wrap boats at marinas. My idea is to create an asset protection market and bring this industrial product into homes in every area in the nation. We can wrap a patio and barbecue set for the winter. We can wrap a whole construction site so it can be heated and work can continue in the winter. Our buying power is so strong, it makes it affordable for the average Joe.

Is it a seasonal business?
Boats take up our time from September to November, but the rest of the year we offer a whole array of products and services. For instance, we do "same day shade." It's a version of the white canvas tents used for special events and weddings. One guy with a hand truck can set up several shrink-wrapped tents on his own, tight as a drum. We can charge 25 percent to 30 percent less than event companies and still operate at a 50 percent margin.

Is it environmentally friendly?
We use a low-density polyethylene No. 4 pure resin plastic. On the recycling side, the plastic is turned into artificial decking, guardrail bumpers, dog toys, things like that. We have a re-bag program, so if someone unwraps his own boat, we leave a prepaid postage bag that ships right to a recycling plant. We also have proprietary rights to a new green shrink-wrap.