By Jennifer Wang
June 3, 2013
This story appears in the May 2013 issue of Entrepreneur. Subscribe » 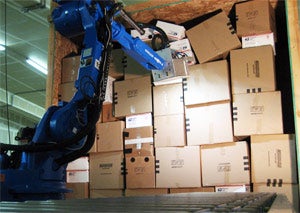 Troy Straszhelm, co-founder and CEO of Industrial Perception, switches on a blue robotic arm outfitted with some of the most advanced imaging software in existence. The robot hand swivels, pauses as if in contemplation, then turns to a mound of empty boxes stacked haphazardly on the back of a truck. It clamps one from the top and tosses it. "Catch," Straszhelm calls out.

Once the kinks are worked out (like perfecting the grip so the box never falls back into the pile) human-operated forklifts in warehouses could be replaced by similar "smart" robotic arms with the ability to deal with any number of problematic scenarios in shipping: crushed boxes, illegible graphics, jumbled inventory in containers or on conveyor belts. An arm running Industrial Perception's software could potentially handle anything involving a box, even "learning" to work only when conditions are ideal. "We're working on the eyes and brains of industrial robots, on perception, manipulation, planning and control," Straszhelm says of his Palo Alto, Calif.-based company. "There's a bunch of stuff you can do with existing hardware if you have software that's smart enough."