A Business Comes Into Fruition

Despite the troubling economy, this young millionaire's produce company is ripe for profits. 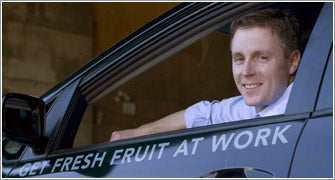 Staying the course: Chris Mittelstaedt was just a child at the controls of a Cessna aircraft when he got his first lesson in business. An entrepreneur and a pilot, Mittelstaedt's father taught him the importance of keeping an eye out for early indications of trouble. Later on, when the dotcom bust severely damaged his regional fruit delivery business, leaving The FruitGuys with about $50,000 of bad debt after customers went belly up--and Mittelstaedt with $100,000 of personal debt--that lesson took on special meaning. "We were growing so fast at the time, and I wasn't paying attention to my dashboard or thinking macroeconomically," admits Mittelstaedt. He recovered by restructuring his business to include a tighter credit policy, more variable costs and national expansion.

Labor of love: The dotcom crash wasn't Mittelstaedt's first brush with adversity. Since the beginning, necessity has forced him to turn up the juice. In 1998, Mittelstaedt was earning $9.50 an hour at a temp job when he learned his wife was pregnant. With no time to waste, he launched his business. By starting his 18-hour days at midnight, lugging heavy crates of produce and making the deliveries personally, his business slowly came to fruition.

Inner core: A decade later, The FruitGuys has grown into a full-scale operation that delivers fresh, high-quality produce to more than 3,000 businesses nationwide. But at the pit of the company is a proactive effort to promote wellness in the community--whether it's by helping clients establish athletic clubs at the office, reaching out to low-income communities or working with farmers to maintain sustainable businesses.

Follow his lead: Weather upcoming storms by keeping your eye on the horizon.

What is your secret to success?
Mittelstaedt: My secret to success is thinking about all the options and never giving up. In this industry.it literally required feats of herculean effort from a physical standpoint--getting up at midnight, sleeping five hours a day, lifting 50-pound boxes over and over again all day long, making deliveries, going in and out of trucks, doing sales on the phone and managing the books. It's really a matter of not giving up, having the vision and also being humble enough to take critical feedback from people.

What advice would you give other entrepreneurs?
Mittelstaedt: If you believe in what you're doing, don't give up, even when people are saying it's not going to work. There are lots of examples in history of people who were amazing entrepreneurs, visionaries--people who believed in something and continued to go for it. Persevere and understand that it truly is a marathon. I'm always skeptical of get-rich- quick stuff. If you believe in it, root down and go for it.

When did you know you'd "made it"?
Mittelstaedt: I still don't know that we've made it, to be honest. I think that's actually one of the secrets to my success. I'm not going to believe that we've made it, and I'm going to keep pushing. I have a healthy dose of worst-case-scenario thinking, and that actually helps me be successful. Things are going to fall apart, so how do I avoid it, how do I grow fast, and how do I bring out great things and avoid the pitfalls when I'm doing it?

What was the first toy or reward you bought for yourself when you became successful?
Mittelstaedt: The Prius was the first new car I ever bought. That's the only reward I've given myself.