A Marketplace with a Mission

After speaking with Rob Kalin, the founder of handmade products marketplace Etsy.com, it's apparent that like any true entrepreneur, his company isn't just a means to a paycheck. It's a mission: A mission to change the way commerce works; a mission to promote sustainable products; a mission that, much like eBay, is creating an exponential number of entrepreneurs in its wake.

EBay is an apt, but ironic, comparison. It was frustration with the online auction giant that first inspired Kalin to create Etsy in 2005. As a woodworker, he was looking for a place to sell his wares. "I [felt] like eBay [had] grown to the point where it's this faceless corporation, and I wanted to create a company that would have a handmade feel to it," says Kalin, 27. He and a group of college friends holed up in his Brooklyn apartment for six weeks before launching the initial beta version of Etsy.com, with Kalin on design lead and his co-founders, Chris Maguire and Haim Schoppik, handling programming. 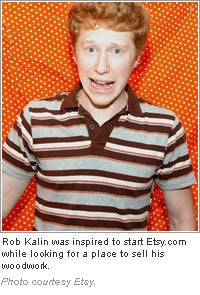 A little more than two years later, Etsy has 100,000 active sellers and 500,000 members. More than 1 million items have been sold through the site, which has become synonymous with handmade goods. Part of the site's attraction is its simplicity. With just a few steps, a crafter can set up his or her store with a subdomain and list items at a set price. Users pay 20 cents to post an item for four months plus 3.5 percent of the selling price.

And the site already has gained cachet in the crafting world. It's not considered unprofessional to forego building your own website in favor of having an Etsy store; in fact, some crafters who already have established websites build a presence on Etsy, too.

This rapid growth has proven to be a challenge. Etsy now has 47 employees; building the engineering team was so difficult that Kalin opened a new office in San Francisco to attract talent. While rejecting the idea of bringing in an outside CEO to manage Etsy, he has hired a financial person. "We have a really good advisory team, but I also want to keep that experimentation and I don't want to feel like I have a formula for how things work," he says.

For the Long Haul
Kalin applies his deep interest in sustainability to his company, not just the products that are sold through it. He views Etsy as a long-term commitment, not as a ticket to dotcom 2.0 wealth, and treats his employees like a community. He pays them a fair wage and provides good benefits and profit-sharing, as well as a casual work environment. "I wanted the company itself to be a community, based on how much we see each other but also because we do have this common purpose," Kalin says.

This sense of community also pervades Etsy on the user end. The forums hum with Etsy members answering other users' questions. The latest feature on Etsy, The Storque, is an online magazine written by members. And Kalin hired five of the top Etsy sellers to run Etsy Labs, a community crafts center that shares space with Etsy's 7,000-square-foot Brooklyn, New York, headquarters. "It's been incredible," he says. "Two nights ago at 11 p.m., there were 10 people sitting around cutting patterns, learning how to make their own skirts and shirts."

For Kalin, it all ties back into his bigger mission: helping to build a sustainable future. "[An item] has this whole other layer of meaning to it if you know who gave it to you, who made it, or if you made it," he explains. "When it breaks or needs alteration, you can fix it or you know somebody who can fix it. Instead of living in this utterly throwaway culture where if something doesn't work or doesn't fit, you just get rid of it."

Kalin and the 100,000 Etsy sellers aren't alone in this mission to create. The Craft & Hobby Association charted a 3.3-percent annual increase in the crafts market from 2002 to 2005. The association also says 4 million people each year discover crafts. This all bodes well for Etsy, which should bring in more than $2 million in sales this year.

Right now, Etsy's engineering team is catching up with the site's growth, but Kalin's mind is always racing ahead, thinking of new features. He sees a huge opportunity in internationalization, where Etsy will be served up in local languages, showing items in a user's native currency first.

"I think there's still 99 percent of the world who doesn't know who the hell we are," says Kalin, in a very glass-half-full manner. That just means Etsy is still on its way to becoming the sustainable world marketplace that Kalin has always envisioned.

Trying to Start a Business and Feeling Lost? 10 Books to Guide You Forward.