How a Microbusiness Rebounded from the Recession

A fashion startup survives cash-flow problems and redesigns itself for a comeback.

By Kelly K. Spors May 9, 2011
Opinions expressed by Entrepreneur contributors are their own.

Warning signs were few for Rose Corrick. In summer 2008, sales at her women's apparel company, Art of Cloth, hit their highest levels ever as more boutiques added her hand-dyed textile fashions. Preparing for big growth, she even signed a lease in October 2008 to move the company's operations from her basement to a 4,500-square-foot warehouse. Little did she realize the timing could not have been worse.

Soon after signing a three-year lease on the new space, the U.S. economy began its nosedive and cash-flow problems followed. About 15 upscale clothing boutiques – scared by the headlines and struggling themselves – canceled their orders in October and November 2008. Art of Cloth had already custom-made the clothes, so the cancelations resulted in about $30,000 in lost revenue. While stores technically weren't allowed to cancel, the company had little legal recourse and didn't want to upset its loyal customers.

"All of a sudden, we couldn't pay our bills," says Corrick, 59, who started the Chagrin Falls microbusiness in 2006 after many years of running a commercial interior design business and studying textile arts. "Being such a small company, it was very painful."

A Low Point
Bills stacked up while revenues tapered off – a recipe for disaster. It became challenging to keep up with the new $2,062 monthly rent, not to mention remodeling expenses. One month's heating bill the first winter ran more than $900.

"We started our move with not enough cash in the bank, very literally, and it just kept getting worse," Corrick says.

By early 2009, she couldn't justify replacing her bookkeeper and office administrator who left the company. She also had to lay off a few textile artisans, reducing her staff from eight down to three.

Cash-flow problems forced her to put several company expenses, such as travel to trade shows, on her personal credit card. Corrick also negotiated longer payment terms with several of her service providers, including her accountant. She didn't even pay herself a salary in 2009, and accepted a $5,000 loan from one of her own employees.

Her goal, she says, was to cut expenses without affecting sales efforts. So she continued to attend several design shows in major U.S. cities to gain exposure to prospective buyers, spending $1,000 to $4,000 to attend each one.

"We had to look like we were succeeding," she says.

But, in reality, the company was sinking.

Reality Check
Art of Cloth had to answer some important questions during the downturn. Consider how these may apply to your business:

• When finances are tight, have you prioritized which expenses you can cut without affecting the ones that drive revenue?

• How can you make your products more marketable to consumers given the current economic realities?

• Are you paying attention to what may be affecting your company's cash flow?

The Turnaround
Corrick decided to take a fresh look at the competitive landscape to improve her microbusiness. She first retained a New York City-based fashion consultant to help her keep abreast of the ever-changing trends in the fashion world.

To help gain more exposure at design shows, she started using national sales reps -- and now has six -- which she pays a 12% sales commission.

She cut prices on several higher-priced items by 15% to 30% because reps complained that customers had become more price-sensitive in the rough economy. But there was another lesson to learn. Lowering prices actually forced her to find ways to cut manufacturing costs and improve efficiency. For instance, she figured out how to speed up by dyeing process by dyeing larger batches of the same color at once.

But more importantly, things were looking far brighter for 2010. 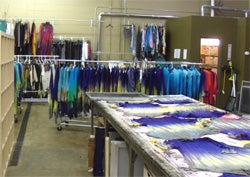 Inside the design space at Art of Cloth, based in Chagrin Falls, Ohio.
Photo courtesy of the company

While attending design shows in Dallas, she secured a $30,000 order from a department store chain, a new customer which now accounts for about 15% of overall sales. Boutique sales were also climbing, Corrick says, because the bad economy forced her to improve operations and "became a lot better at creating collections" that boutiques could buy.

Before, Corrick's hand-dyed pieces were unique and always slightly different, but she realized buyers wanted full collections with pieces that offered complementary colors instead.

Lesson Learned
Corrick says seeking expert help to update her fashion collections several times a year and make them more marketable to boutiques was critical to her turnaround. She also learned the importance of building strong business relationships, especially considering you never know when you may need their cooperation or they may need yours.

"Whether it's the accountant who didn't get paid a long time or the building contractor whose wife I gave gifts to," trusting relationships can help a business weather the bad times.