Think of your average supermarket -- it's a place of plenty, with piles of fresh vegetables bursting off the shelves, yard after yard of meats, cheeses, breads and every wholesome and unwholesome thing you could ever want to stuff in your face. But that illusion of abundance comes with an enormous cost.

The Natural Resources Defense Council estimates that grocery stores toss out $15 billion worth of fruits and vegetables each year, and that the average supermarket dumps $2,300 worth of out-of-date products each day. (In fact, the entire U.S. food system wastes 40 percent of the goods it produces.) Then there are the hundreds of boxes the food is shipped in; the tons of plastic bags, pasteboard and cellophane the food is wrapped in; plus the paper and plastic bags customers use to carry it home.

When you take a good, hard look, a grocery store starts to seem less like a modern cornucopia and more like a national shame. At least, that's what Christian and Joseph Lane see when they look at a conventional supermarket. The brothers from Austin, who run a software-consulting firm, were kicking around ideas for a second business when they were struck by the concept of a zero-waste, packaging-free grocery store.

Bulk up: The in.gredients store in Austin.

"Our thought was to build a place that is a convenience store in scale but a full-size grocery store in scope," Joseph says. The idea resonated with them and with the online crowdfunding platform Indiegogo, which contributed more than $15,000 in startup capital to open in.gredients last August. 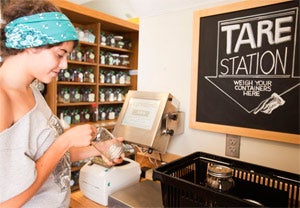 Paper or plastic? Customers bring their own containers to the store.

How do things operate at the tiny, 1,300 square-foot-store? (By comparison, 7-Eleven stores typically measure 2,400 to 3,000 square feet.) Customers bring in their own boxes, bags or glass or plastic containers and weigh them. Each receptacle is given a QR code that indicates its empty weight. Then shoppers can fill up on some 350 bulk items and packaging-free products, two-thirds of which come from local sources. (Some items, like soy, meat and dairy products, must by law be prepackaged.)

On the back end, in.gredients recycles almost all the materials in which its products arrive, working with local company Break it Down to process items like plastic films, Styrofoam and Tetra Paks. It's an approach that leverages and encourages "precycling"--prioritizing "reduce and reuse" over recycling.

But there are other advantages to shopping in the microgrocer. "We focus on local products and real food, things that people don't recognize as food anymore," Christian says. "Part of what we're doing is reintroducing people to the ingredients that go into real food. We've cut out the middle aisles of the grocery store where the processed and prepackaged items would be. It eliminates all those overwhelming choices." 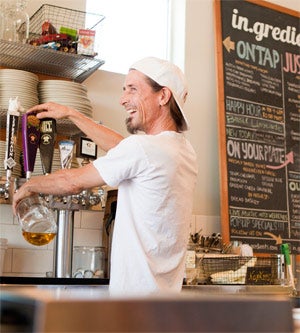 In less than a year since it opened, in.gredients is a verifiable hit. Not only did it win the 2012 "Best of Austin" award from The Austin Chronicle for best new local business, it's also sticking to its zero-waste goal, sending less than a pound of garbage to the landfill each month. And its business model has inspired others to reassess their packaging needs. "Third Coast is a small, socially conscious coffee roaster in town," Joseph says. "One of the things we were doing is exchanging our empty coffee buckets for full ones. It saved them money, and they started exchanging containers with all the stores they work with."

While in.gredients was conceived as a local market serving the Cherrywood neighborhood on Austin's east side, demand for wholesome food has attracted shoppers from farther afield. In fact, the Lane brothers report that store traffic is double what they expected, even though so far customers are buying only half as much as predicted. At press time, Christian was confident that in.gredients would be profitable by summer.

As yet the Lanes don't plan to expand until they work out the kinks in their first location. However, they do believe they've found a niche that could be replicated around Austin and in other cities. "Time will tell if we can prove this concept out," Christian says. "If all goes well, we'll put stores in a handful of Austin neighborhoods. We really want to make an impact and reduce consumption and push the limits, and we can't do that with just one store."