Affordable Custom Made Suits? It's No Longer an Oxymoron

In 2009, when Richard Hall and McGregor Madden were working in Shanghai--Hall for the Canadian trade office; Madden for Groupon--the two friends didn't aspire to dress like GQ models. That is, until they fell in with a crew of stylish Swedes who introduced them to the world of low-cost custom clothing. As the two upped their sartorial smarts, others took notice. "When we'd go home for Christmas to Oregon and Indiana, all our friends would comment on how nice our clothes were," Hall says.

In 2011, after Hall lost his job and Madden decided he was ready to move on, they leveraged their knowledge of Chinese manufacturing and trade, technology and the Mandarin language to create Proper Suit, a company that sells high-quality, Chinese-made, custom laser-cut suits online. In just two years, Proper Suit reached $1 million in sales, and its founders, now based in Chicago, have launched a second, potentially more lucrative business called Hall&Madden, a subscription dress-shirt service. 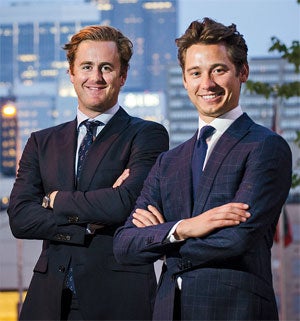 In recent years, the menswear arm of e-commerce has become big business. Dozens of companies, including Indochino, Black Lapel and Arden Reed have ignited a bespoke tailoring revolution. "I think what drives a service like this comes from people in places with a strong high-tech drive," says Joseph Rosenfeld, a personal-image consultant in Silicon Valley. "It's popular with people who are tech-oriented and sit in front of a computer all day. They have a proclivity to do what comes naturally."

Hall and Madden, however, believe their particular service has an edge over the competition because it is not entirely digital. They realized almost as soon as they began that to be effective, the tailoring process required face time with their clientele. In the beginning, Proper Suit trusted consumers to take their own measurements--but some weren't getting the fit they expected.

So the partners, along with two other fit specialists, began crisscrossing the country, scheduling tailoring appointments every three to eight weeks in major cities such as Atlanta, New York, Los Angeles, Chicago, Seattle, San Francisco and Washington, D.C. After an hourlong fitting, customers could place orders via Proper Suit's website, which charges between $850 and $1,400 per suit, depending on the fabric. 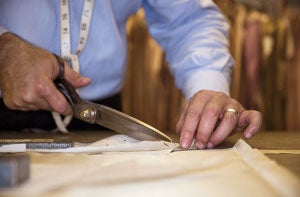 A cult-like following ensued. "It's not uncommon for guys to drive four to five hours for a fitting," Hall says. "We had one guy from Singapore who was in New York and delayed his return trip to take a bus to D.C. just to do a fitting."

An observation from all that time spent with customers turned into the duo's latest venture, Hall&Madden dress shirts. They saw that even though men were willing to shell out for a custom suit, they were holding on to their dress shirts for far too long, some showing up to fittings with stained and frayed shirts. "These business guys love their shirts, but they're tired of spending $140 or $150 a pop on them," Hall says.

Hall&Madden aims to help men build their wardrobes through a subscription service that ships three high-quality dress shirts every three, four or six months, for $150 per delivery. The first order includes basics such as white, blue and striped shirts; subsequent deliveries build on the collection with plaids and seasonal fabrics.

The shirts aren't custom-cut like the offerings from Proper Suits, but they do feature more sizing points than off-the-rack designs. Hall&Madden signed up more than 1,000 subscribers in less than a year and has closed in on $500,000 in sales.

Vertical integration and lack of overhead--no retail shops, warehouses or sales staff to maintain--contributes to Hall&Madden's competitive pricing. And the founders' intimate knowledge of China's garment industry keeps styling ahead of the fashion curve. "Patterns are usually designed by in-house people at the manufacturers," Hall explains. "We're able to study the market and work with the cotton mills. We look through what they have and collaborate directly."

As they edge closer to their four-year goal of 8,000 subscribers, Hall believes he and his partner will increase profit margins. "Once you're dealing with 150,000 meters of cotton fabric, that's big-boy status," he says. "That's where you have incredible buying power."

While pushing the growth of the shirt service, Hall says he and Madden are content to keep their original company, Proper Suit, relatively small. "There are natural limitations in a field like this. Fortunately, it's a passion project and a great business," he says, pointing out that finding people who can do fittings is very difficult, and something they won't skimp on. "Quality and fit is everything in a suit. What we do is very technical, but at the same time it's very artistic. It takes a unique person to fit a suit the way we do."