This 24-Hour On-Demand Ice Machine Is a Game Changer

Next time you buy ice at the convenience store, you might want to swab the bag for DNA. Just think about the journey it makes from the ice plant to your gin and tonic--it's pumped out by a machine, then bagged, loaded onto a truck, handled by a delivery person, rearranged by convenience-store clerks and pawed by customers. And who knows how long it's been sitting around? To top it all off, you'll probably have to body-slam it on your oil-stained driveway before it's broken apart enough to use. Ask yourself this: Is there any other product you would consume on a regular basis that is typically kept padlocked in a rusty 1960s-era cooler stored outside a truck stop?

IceBorn's answer to that question landed it on the Franchise 500® for the first time this year, at No. 489. The Jacksonville, Fla.-based franchise (from parent company Ice House America), which manufactures state-of-the-art, 24-hour, on-demand ice and water vending machines, is a game-changer. Its proprietary system, which can be monitored and controlled by franchisees remotely via smartphones or computers, filters and purifies tap water before freezing it and storing it in a sanitary internal bin. Ice is made continuously throughout the day, so it is always fresh. When a customer makes a purchase using cash or a credit card, the machine's patented system rakes the loose ice into a plastic bag, eliminating transportation costs and constant manhandling. 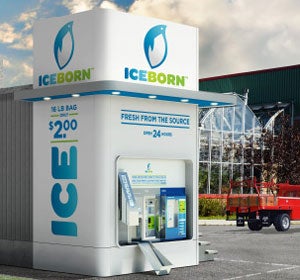 Vice president of marketing Michael Little says the company, which began franchising in May 2012, has commitments for more than 1,000 units in 11 states.

With the 2,700 units it has already sold to individuals, mainly in the South, IceBorn has become something of an ice monster. "In 10 years in operation we've been able to accomplish something no one else has been able to do,"Little says. "We're already producing 1 billion pounds of ice per year, and we still have huge swaths of the U.S. to expand to."

In particular, IceBorn is looking to the Northeast, Midwest and West, where it is recruiting franchisees big and small to install ice machines in well-trafficked areas. Built in Moultrie, Ga., the machines come in three sizes--the most popular model, the full-size IceBorn House, fits in two parking spaces and produces up to 13,000 pounds of ice in 24 hours--and require only an electric line, water line and drain to be operational. Little estimates that most franchisees can set up an IceBorn House, including leases and permits, for less than $150,000; the newest model, the in-store IceBorn Express, starts at $19,000.

The key, of course, is placement. Little says IceBorn helps franchisees find the perfect spots for their machines, usually in parking lots of value-oriented retailers along major arteries. A location en route to a sports field or marina is a plus, but the main users of the ice machines, he says, are blue-collar tradesman, who load up each morning before heading to the job site.

"This concept has spread like wildfire,"Little says. "We have people who own 40 units and owners with one. And we have new people coming in every day."