Struggling to Fill That Open Position? You're Not Alone.

By Mark Koba July 13, 2014
This story originally appeared on CNBC

A declining unemployment rate—now at 6.1 percent—would seem to mean that employers are packing their payrolls with workers. But many businesses say they are having a harder time filling open positions this year than last year, according to a new survey.

The poll, conducted by franchise staffing firm Express Employment Professionals, reports that 83 percent of the 115 company's franchises surveyed said that it was "somewhat difficult" or "very difficult" to fill a job opening this year. That's up from 78 percent who reported the same for the survey in 2013.

When asked for the primary reason jobs remained unfilled, 52 percent of respondents cited a lack of available candidates.

Businesses continue to blame a skills gap between jobs seekers and the open positions.

"This was surprising to me as I thought the number of companies having difficulties would be lower this year," said Bob Funk, CEO of Express, and a former chairman of the Federal Reserve Bank of Kansas City.

"Because of the skills gap, the unemployment rate is still higher than it should be," he added. "The gap is real."

Another reason for the hiring slowdown, however, might be the often low pay that's offered, said Rebecca Smith, deputy director of the National Employment Law Project, an advocacy group for workers.

"Except for those at the top, wages have consistently declined over the past few years," she said. "What you're seeing now is more temp hiring without benefits. Workers aren't happy about that."

Here is a survey breakdown of the difficulty and reasons with comparisons to this year and 2013: 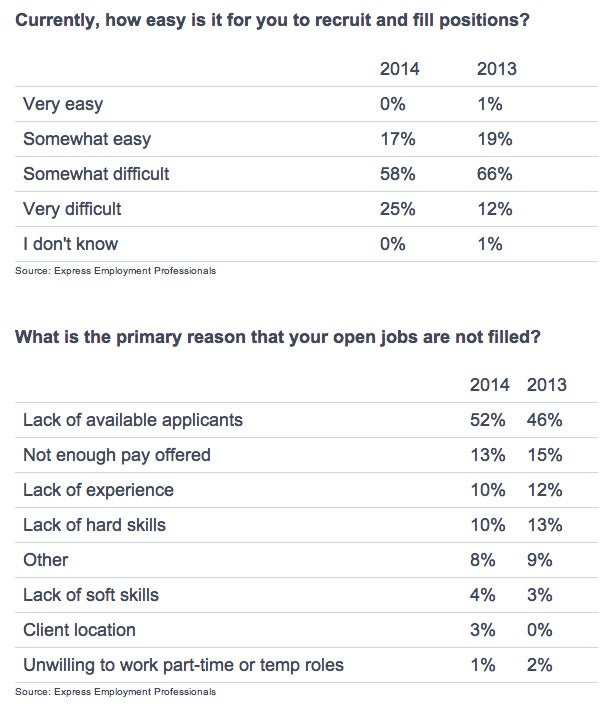 Mark Koba is a senior editor at CNBC.com.