By Lindsay Friedman March 24, 2016
Opinions expressed by Entrepreneur contributors are their own.

There’s one dress you certainly won’t find on the runway this spring, not that it wouldn’t qualify. Especially when you consider the couture-like price for the dress: $3,000.

But there's something special about this dress: it was 3-D printed.

Developed just over a year ago by Boston-based Nervous Systems, the dress flows and sways just like a normal cotton dress would, except it’s not. Instead, the black garment -- with lace cut outs -- is made out of  hundreds of plastic pieces that came out of a printer ready for wear.

The studio, run by Jessica Rosenkrantz and Jesse Louis-Rosenberg, has since made a number of similar looking dresses. However, with a show coming up at Boston’s Museum of Fine Art, the group decided to change things up a bit with its ninth dress.

Related: 3-D Printing as a Replacement for Cooking? It's Coming.

This time, the new number, called the Kinematics Petals dress, has rounded nylon pieces that lay atop plastic triangles. If you’re struggling to imagine what that might look like, think feathers or scales. To create a more textured effect, an overlay was fastened to the hinge of each triangle. 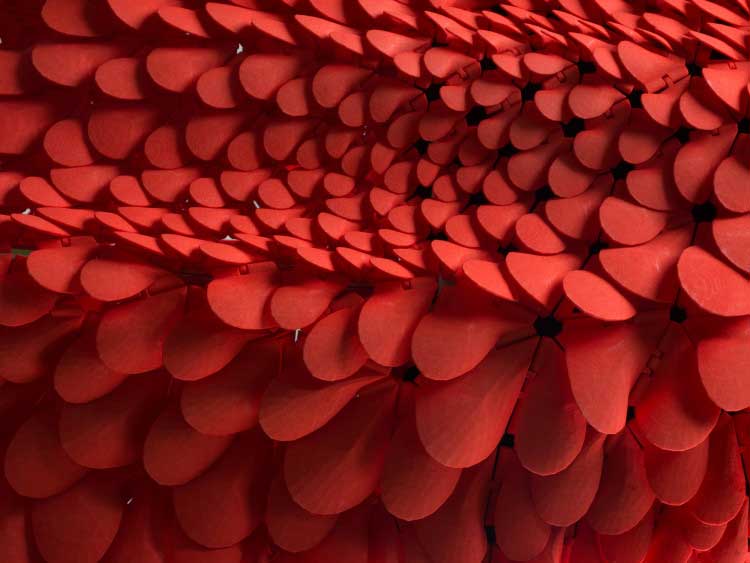 “Which in my opinion is a strong benefit,” she says.

No doubt most women would certainly agree with Rosenkrantz. Though it’s not like many folks would turn down the chance to wear one of the first 3-D printed dresses. That is, if you can afford it.

But high end isn’t exactly what Nervous System is going for. Instead, the crew’s working to generate more practical and customizable options for the average consumer. For example, the already existing dress can’t be folded and must be rolled into a cinnamon bun-like shape before being sent through the printer and has to be done first as a skirt and a blouse before being snapped together.

“Our ultimate goal is not to make luxurious couture 3-D printed dresses, but more to find a way to integrate these technologies into normal everyday clothes,” Rosenkrantz says. “Which were not anywhere close to doing … yet."

If dresses don’t strike your fancy, no worries. There’s lots of 3-D printed creations out there from guns, drones, acoustic guitars, flutes, camera lenses and even chocolate.

The technology has been put to use for more humble causes, too. For example, a 3-D printer was used to make a new hand for a 7-year-old girl featuring her favorite colors.

Still, if a fashion statement is what you’re after, it may not be too far fetched to expect someone such as Lady Gaga to hit the red carpet in fitted 3-D attire.

Hey, just because us norms can’t yet take advantage, doesn’t mean the head monster herself shouldn’t.

Why CEOs Should Absolutely Concern Themselves With Cloud Security