After a whirlwind year, the co-founders of Shine share what they've learned.

No matter who you are and what you have achieved, there will be times when you doubt yourself. The co-founders of Shine understand that and want to help its users boost their well-being with free daily inspirational texts to encourage and motivate them to achieve their goals.

A little over a year after Shine’s official launch in March of 2016, Naomi Hirabayashi and Marah Lidey, also its co-CEOs, have significantly grown its user base. They started with a beta test of 70 people in 2015, and now send texts to half a million users, with no sign of slowing down.

They also recently announced that the company has raised $2.5 million in seed funding, resources that will be used to further develop user growth, as they test out models that would bring in revenue going forward.

The pair first met as co-workers at non-profit DoSomething.org five years ago. Hirabayashi was chief marketing officer and Lidey was the director of mobile and messaging.

As opposed to the negative feelings some people experience while using Facebook, Twitter or Instagram, Lidey and Hirabayashi wanted to use technology to make people feel less alone in the world.

“You may have thought you were the only one that wakes up every day and compares yourself to your co-worker. But you’re not,” Lidey says. “We want a great relationship. We want to travel. We want the best job ever. We want to have it all. That equates to pressure and a lot of comparison. And so it's almost like there's a bubble and it's starting to burst. We're starting to realize that it's not sustainable anymore. And people are really looking to invest in themselves.”

Related: Weave Health and Wellness Into Your Company's Culture

While health and wellness products -- think a fancy spa treatment or something you might find being recommended on Gwyneth Paltrow’s lifestyle website GOOP  -- might have a reputation of being expensive, Lidey and Hirabayashi wanted to create a product that could be available to everyone.

“Well-being is often kind of branded as 'we have everything else figured out, then you get the luxury to think about your well-being.' You can go on that sabbatical and go on that yoga retreat. But the reality is everyone needs well-being,” Hirabayashi says. “Certainly, there are people that might not have [the] disposable income to put towards those things but they are working really hard. [We want to help] the middle manager or the recent college grad or the single mom.”

I recently signed up for Shine’s service. You’re able to choose a time you would like the text to arrive, and I selected 8:30 am, a point at which I’ve usually arrived at the subway as the doors of the train are about to close. I’ve found it to be a solid reminder to take a deep breath and step back even if my morning has been a stressful one.

Related: When You Understand Stress You Can Manage It

Shine’s founders say they believe that an integral part of an investment in ourselves should be a big dose of compassion for others, but especially for yourself. And since no one understands stress quite like first-time founders, we asked Lidey and Hirabayashi for their top tips for any entrepreneurs about to make the big leap. 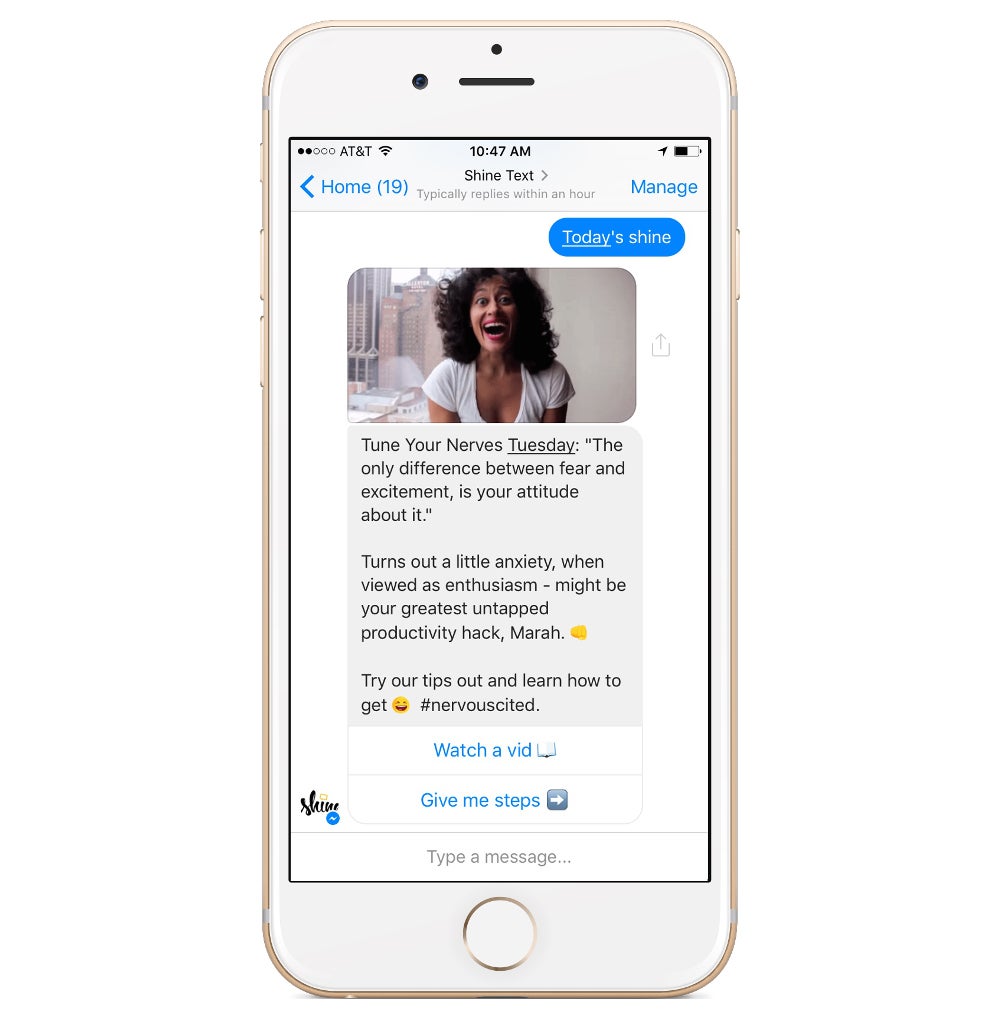 Like Lidey and Hirabayashi, right now you might be deciding at what point to take your side hustle full time, and the prospect of that juggling act can be daunting. But the pair say to take it one day at a time and work on it whenever you have a free moment.

“We had our lunch break and then we had after work and then we had before work at 7 a.m.," Lidey says. "The days were packed and that's just running the product alone. We were doing meetings and taking Friday afternoons to do a bunch of pitches. It was definitely humbling.”

Hirabayashi says one of the most validating early moments was the positive response from the 70 beta users. With that encouragement they were able to take the scary and necessary step of sharing it even more widely.

“Just put it out there … in a way that you know makes sense for your business,” Hirayabashi says. “Once you show that conviction, and the more people become attached to the product, the more mobilized you are behind it.”

Lidey says that throughout their ride, “our mistakes have made us.” The pair recalls working with a law firm when they were in the early stages of fundraising that they didn’t trust. They had instances where they felt condescended to, and their first funding round was deferred because of what they say was poor management and miscommunication on the firm's end.

It was at that point that the duo realized that going forward they had to listen to themselves if the company was going to get off the ground. “That was a really helpful lesson for us because you tend to know early on when something is off," Lidey says. "It’s similar with partners that maybe weren't a fit. Just trust that and go with it. You also know early on when things are right."

Related: Why Entrepreneurs Must Believe in Themselves

4. Don’t get thrown by the competition.

The pair advises, especially jumping into a big industry such as health and wellness, to know your competitors but to not let them distract you from your unique vision.

“There's the idea that everything's been done before. In some ways it's true, but also there's a reason that you have achieved the success you have thus far, and it's the same with individuality and when you compare yourself to other people's success," Lidey says. "It absolutely applies to companies. Particularly as women you get compared a lot to other companies founded by women. Like Reid Hoffman didn’t go out there and get compared to Elon Musk.”

5. Remember that there is no one right path to entrepreneurship.

Just as Lidey and Hirabayashi say that they don’t want their users to feel pressure to compare themselves to other people, entrepreneurs can often feel a similar pressure. It can seem like there are only a few common narratives about what makes a great entrepreneur, and that image is often a young guy in a hoodie building something out of his dorm room.

"You don't have to see an exact version of you in that exact position to figure out that path or to potentially become an entrepreneur,” Hirabayashi says. “[There’s that line] ‘I feel like I could just never work for anyone else.’ But I think that's a strength that Marah and I remember working for someone else. I remember all the hustle and grit of getting that first job.”