Silver (SLV) is down for the month and weakened significantly following the FOMC meeting. Taylor Dart breaks down why the dip could be a good buying o...

By Taylor Dart June 22, 2021
This story originally appeared on StockNews

Silver (SLV) is down for the month and weakened significantly following the FOMC meeting. Taylor Dart breaks down why the dip could be a good buying opportunity.

It's been a rough month so far for the silver (SLV) market, with the metal down 10% in less than 20 trading days, erasing its outperformance vs. the S&P-500 (SPY). Following last week's negative reaction to the Federal Reserve Meeting, silver's year-to-date return now stands at a paltry (-) 1%, vs. a (+) 12% return for the S&P-500. This significant underperformance has put a minor dent in the Silver/S&P-500 ratio. Fortunately, it hasn't inflicted any material damage to silver's technical picture or the Silver/Gold ratio, which continues to trend higher. The good news is that we continue to track quite similar to the early 2000 analog, with the base-on-base pattern still intact. Let's take a closer look: 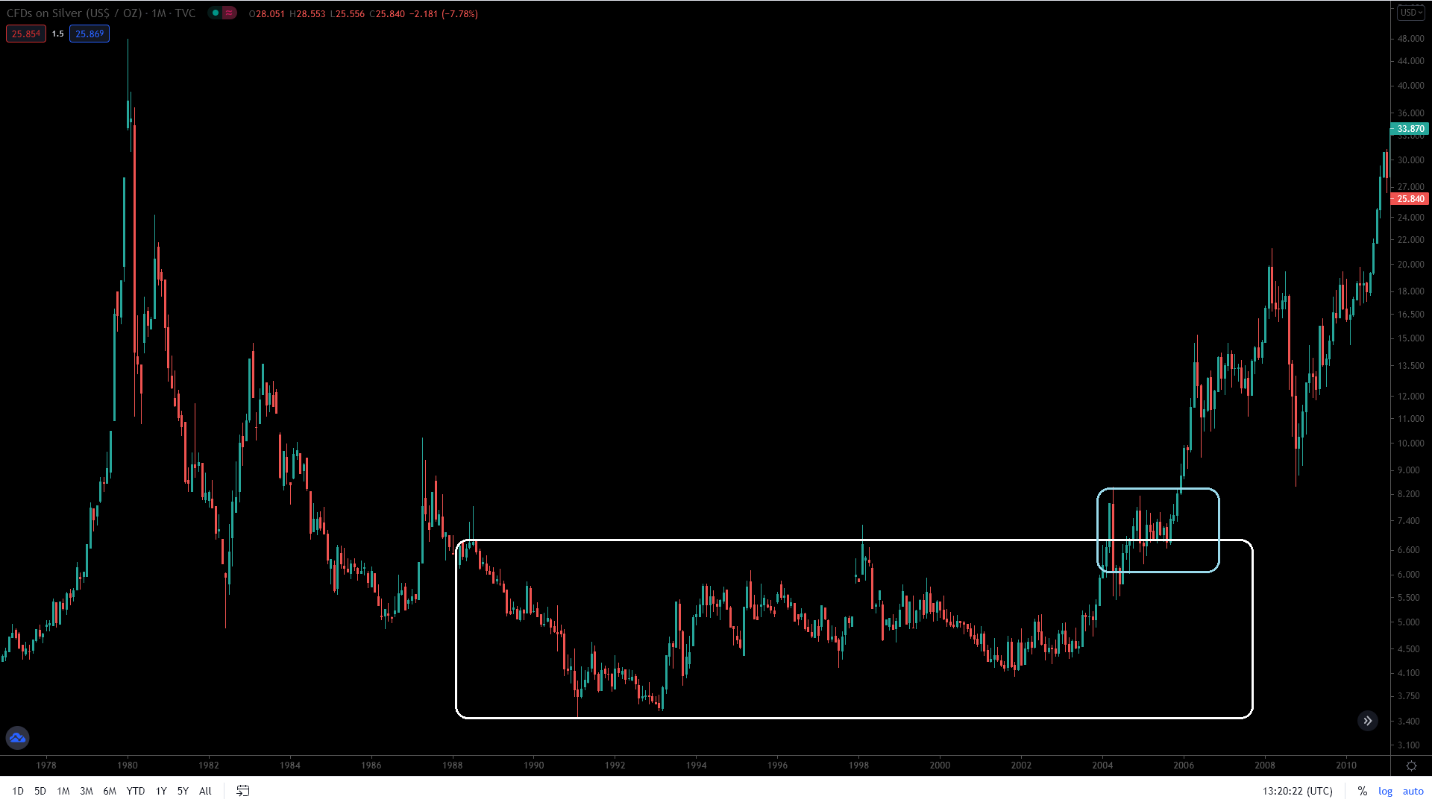 If we look at the chart above, we can see that silver broke out of a massive multi-year base in 2005 and spent nearly two years going sideways before resuming its trend and making new highs. Just last year, silver also broke out of a multi-year base to new highs and has spent nearly 12 months going sideways now in a volatile 25% range. This volatile range is likely frustrating many investors, but it's pivotal to stay focused on the big picture. Unfortunately, many weak hands are shaken out during these base-on-base setups, left exiting near the lows in the early innings of a new bull market.

If we look closer at the chart, we can see that silver endured three violent corrections during its 2004/2005 base-on-base setup, with each being successively smaller. This suggested that there was less and less supply to go around as the base developed, with silver soaring more than 80% in 12 months once it finally broke out. So far, we are seeing something quite similar in the current pattern, with last week's decline representing another higher low for the time being. Assuming the $24.50/oz level holds, we would confirm a higher low in line with the bullish pattern that developed over 15 years ago. 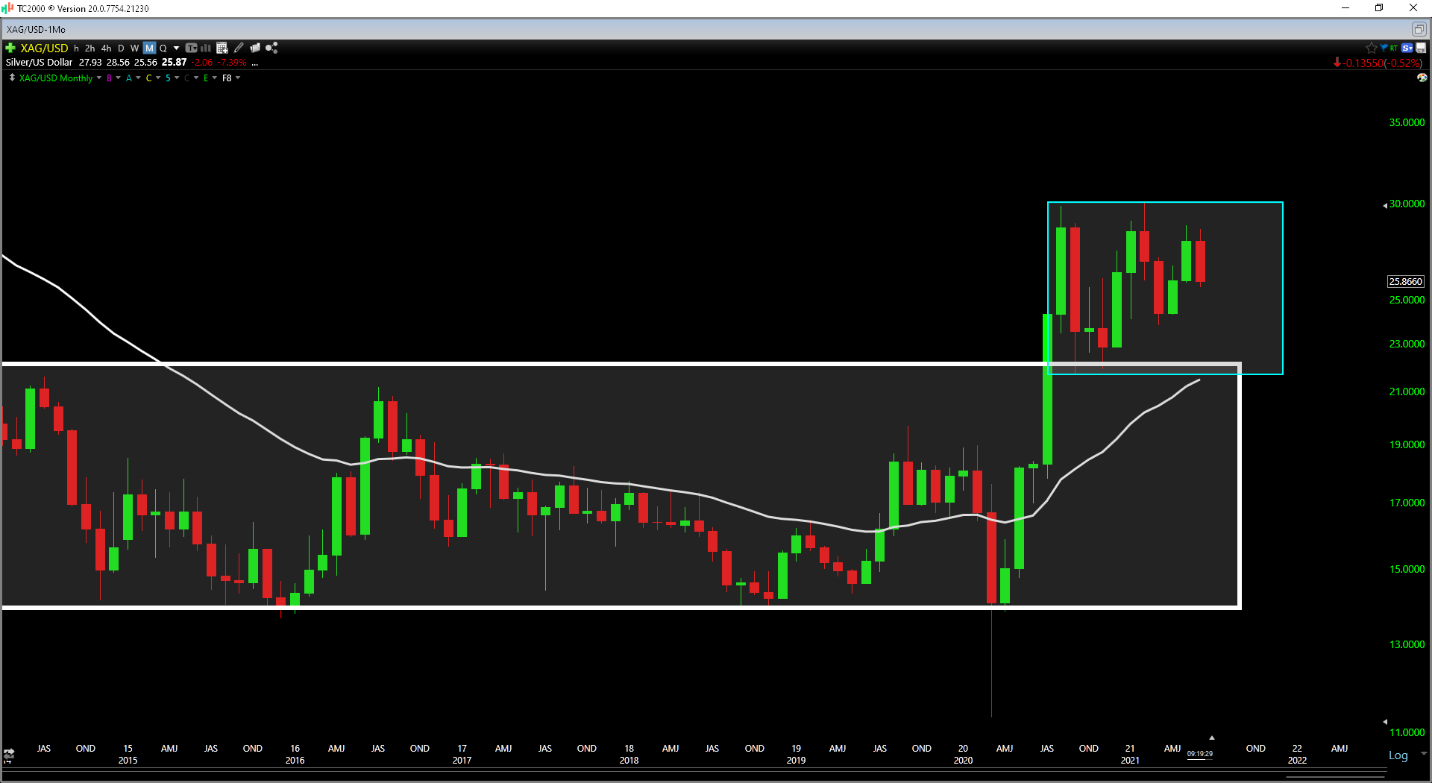 To continue tracking in line with the previous pattern that began a historic bull market in silver, we want to see $24.50/oz defended. If this level were to break, the $22.00/oz level becomes pivotal, with this being the main support for this current base-on-base pattern. The good news is that with silver already starting to become short-term oversold last week, the conditions are in place for further weakness below $25.00/oz to be a bear trap. Therefore, if silver does continue its sell-off and dip below $25.00/oz, it's likely this decline will be on borrowed time. 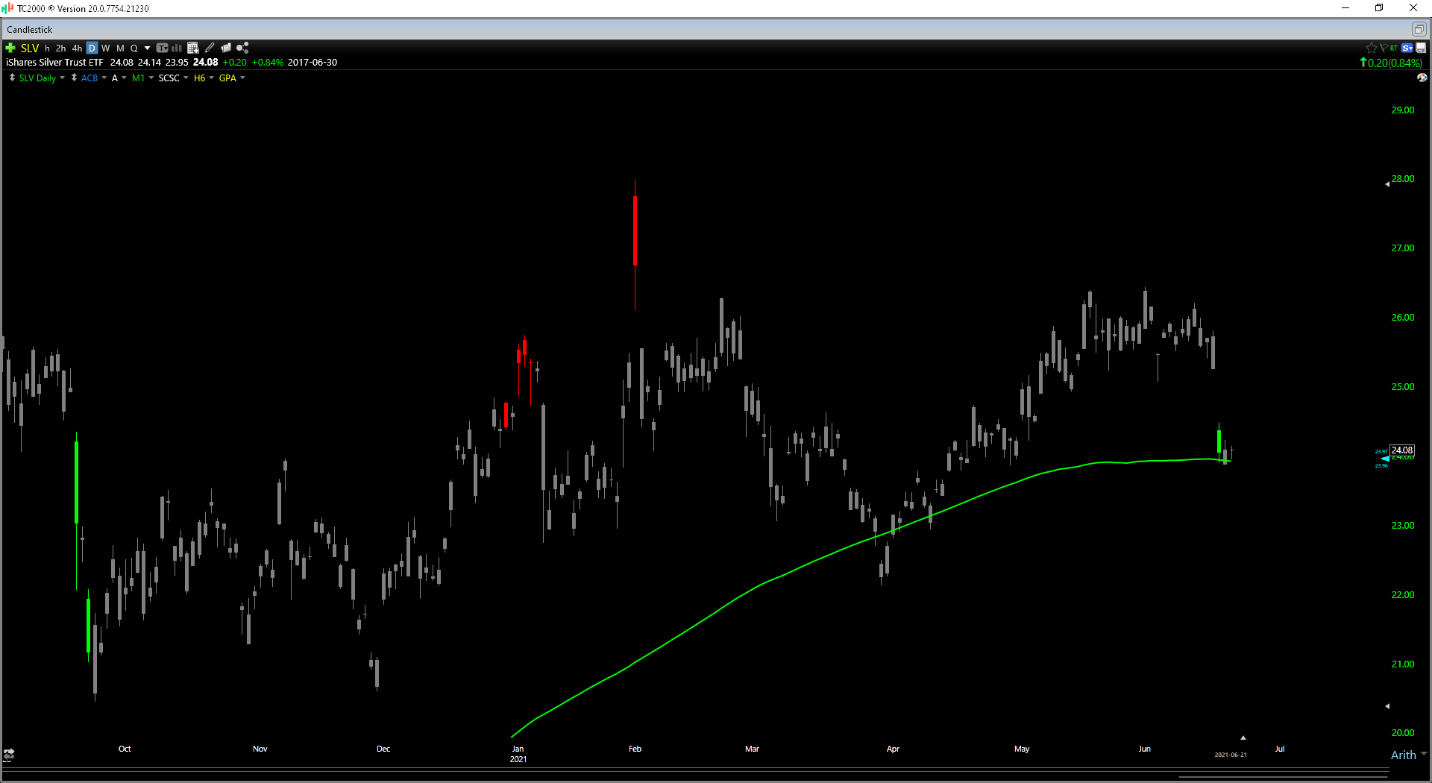 So, what's the best course of action?

While I am not long silver currently, I would be paying close attention to selling exhaustion if this decline continues. We've already seen a significant improvement in sentiment, with the percentage of bulls down from 80% to 30%, and the key now will be a sharp reversal to confirm buying support. Based on the similarity to the 2005 analog, I would expect further weakness to present a low-risk buying opportunity, and I'd ultimately expect a breakout through $31.00/oz before year-end. Given this expectation, I would view any dips below $24.60/oz as low-risk buying opportunities.