2 Tech Stocks to Buy on Weakness

It's been a turbulent start to the year for Tech, with the Nasdaq 100 Index (QQQ) sliding more than 18% from its highs and the Nasdaq Composite down more than...

By Taylor Dart February 24, 2022
This story originally appeared on StockNews

It's been a turbulent start to the year for Tech, with the Nasdaq 100 Index (QQQ) sliding more than 18% from its highs and the Nasdaq Composite down more than 20% from its highs. While some might attribute the correction to geopolitical instability, I believe the correction was long overdue regardless of the Russia/Ukraine news, with rising rates and frothy valuations creating the ingredients for a substantial correction in 2022. Fortunately, for investors that were patient and took some profits into Q4, the market is now beginning to get oversold, and some names are finally on the sale rack after this sharp correction. A couple of these names are mega-cap companies with a history of strong growth, with both Meta Platforms (FB) and Netflix (NFLX) trading at massive discounts to their historical earnings multiples.

Fortunately, for investors that were patient and took some profits into Q4, the market is now beginning to get oversold, and some names are finally on the sale rack after this sharp correction. A couple of these names are mega-cap companies with a history of strong growth, with both Meta Platforms (FB) and Netflix (NFLX) trading at massive discounts to their historical earnings multiples. Let's take a closer look at both companies below: 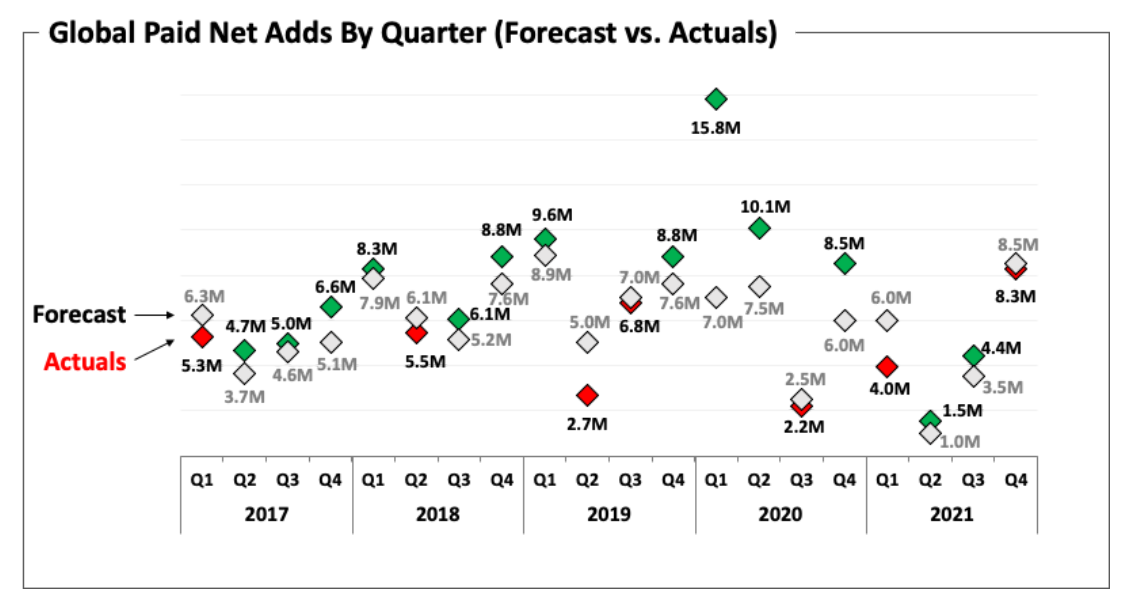 Just over a month ago, Netflix released its Q4 results, beating sales and earnings estimates, but delivering a much softer outlook than many investors were looking for heading into 2022. This was based on estimates of 2.5MM paid net subscribers, a meaningful deceleration from the 4.0MM net subscribers in the year-ago quarter. While retention and engagement are encouraging, the company noted that acquisition growth has not accelerated to pre-COVID-19 levels.

Many investors are convinced that NFLX's best days are over, with competition beginning to chomp at the massive streaming pie. While there is no question that competition is fierce and that this argument holds some weight, NFLX continues to have a dominant position in the streaming market and is expected to grow annual earnings per share [EPS] by nearly 30% over the next two years.

This may be a deceleration from years prior, but there's no reason that a company with a compound annual EPS growth rate of ~36% (FY2019 – FY2023) should trade at forward earnings multiple below 25. In fact, NFLX has historically traded at an earnings multiple between 70-90, and even with growth slowing, I would argue that a fair earnings multiple for the stock is 35-40. At the low end of this range, NFLX's fair value comes in at $507.50, pointing to more than 40% upside from its current share price of $360.00.

Given that momentum is to the downside, it is possible that this pullback could persist a little longer, but I believe the worst of the pullback is over, and that downside in the stock is limited. Hence, if I were looking to add exposure to NFLX, I would be using weakness below $360.00 as an opportunity to start a position. For now, I remain on the sidelines, but I may look to start a position in the next week if we see an undercut of the prior low at $350.00.

The other name that's been hit especially hard since its Q4 and FY2021 results is Meta Platforms, previously known as Facebook. The company's Q4 revenue of $33.7BB beat estimates, but EPS came in shy of forecasts at just $3.67 per share. This translated to full-year EPS growth of less than 40%, which was well below previous estimates, and the outlook for FY2022 calls for a decline in annual EPS year-over-year.

For a company like FB that previously commanded an earnings multiple of nearly 30, a weaker earnings trend than anticipated can wreak havoc, and this is exactly what we've seen, with FB correcting nearly 50% from its highs in less than six months. The good news is that this has left the stock quite reasonably valued, sitting at less than 14x FY2023 earnings estimates. This is a very reasonable multiple for a stock that's expected to see a new high in annual EPS in FY2023 and FY2024, after a blip in FY2022 ($12.55 vs. $13.77).

In fact, FB's historical earnings multiple sits closer to 30 over the past decade. Even if we adjust for the slower growth rate going forward and assign a fair earnings multiple of 18, this still points to a fair value of more than $266.00 per share. This translates to more than 25% upside from current levels, suggesting that the stock finally offers some value to investors. Let's look at the technical picture below: 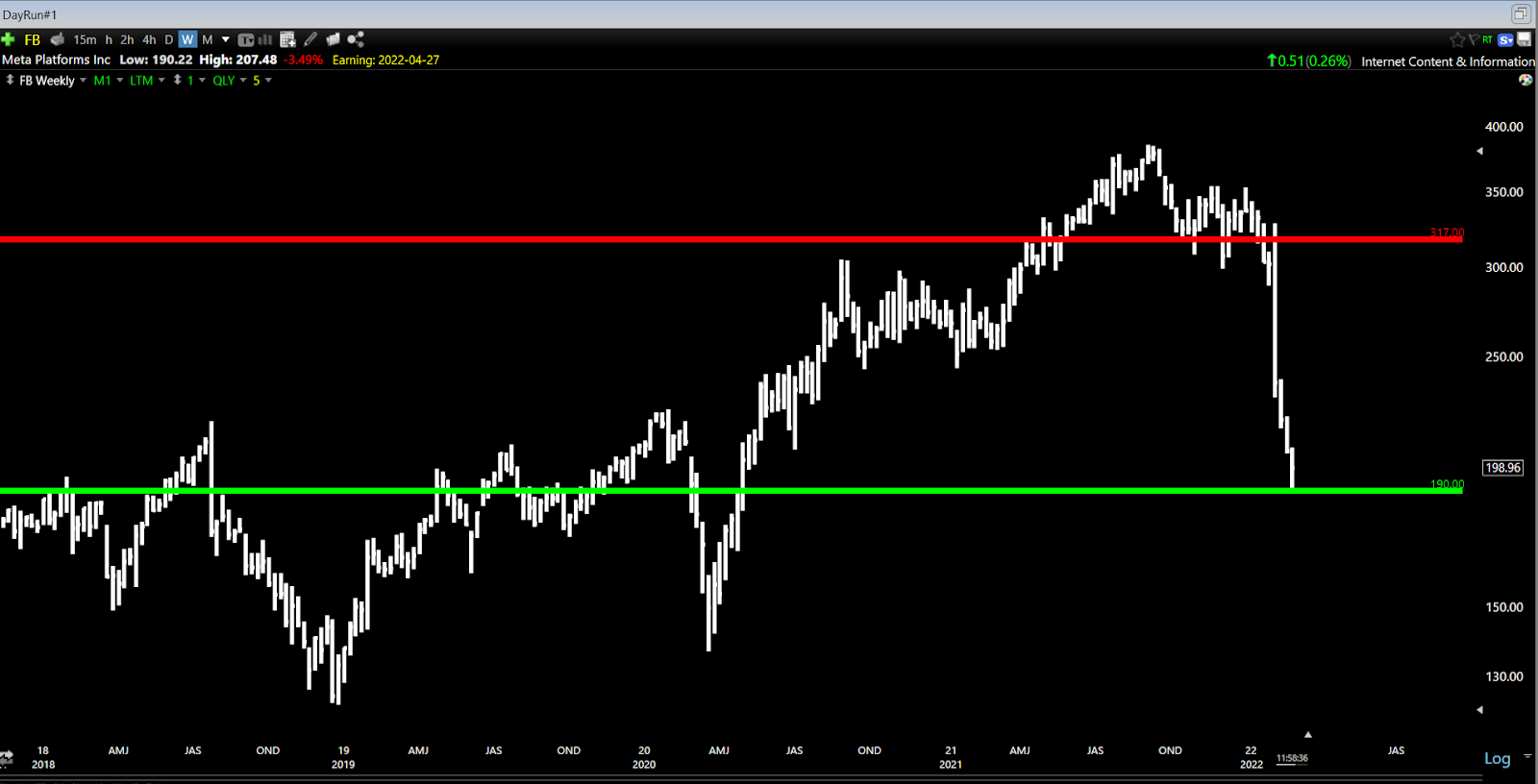 Moving over to Meta's technical picture, we can see that the stock has plunged by nearly 50% from its highs and has found itself hovering just above a key support level at $190.00. Meanwhile, there is no strong resistance for the stock until $317.00, given that no strong resistance levels have been built on the way down, due to the torrid pace of the correction. This provides investors with a more than 10 to 1 reward/risk ratio from a technical standpoint from the $200.00 level.

Obviously, this attractive reward/risk ratio does not have to translate into higher prices, but it certainly has created a relatively low-risk buying opportunity for investors. Hence, for investors anxious to add exposure to FB to their portfolios, I would view any pullbacks below $200.00 as an attractive point to start an initial position in the stock.

While we have not seen any confirmation of capitulation from a sentiment standpoint, the market has become quite oversold short-term and is nearly as oversold as it was in March 2020. This technical setup favors being open-minded to a short-term bottom and the potential for a 10% plus rally in the QQQ from the $320.00 level. With FB trading at less than 14x FY2023 earnings estimates and NFLX trading at less than 25x FY2023 earnings estimates, both names offer low-risk entries below $200.00 and $360.00, respectively, for an initial position.

Disclosure: I have no positions in any stock mentioned but may start a new position in NFLX in the next 72 hours

Meta Platforms (FB) and Netflix (NFLX) are part of the Entrepreneur Index, which tracks some of the largest publicly traded companies founded and run by entrepreneurs.

The post 2 Tech Stocks to Buy on Weakness appeared first on StockNews.com